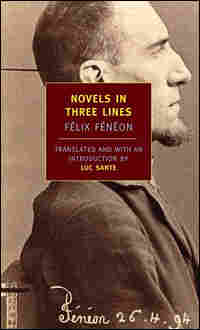 M. Jonnart denied to the commission that the new tax
plan was a scheme to make the budget's ends meet.

A criminal virago, Mlle Tulle, was sentenced by the Rouen
court to 10 years' hard labor, while her lover got five.

Because of his poster opposing the strikebreakers, the
students of Brest lycee hissed their teacher, M. Litalien,
an aide to the mayor.

Nurse Elise Bachmann, whose day off was yesterday, put
on a public display of insanity.

A complaint was sworn by the Persian physician Djai Khan
against a compatriot who had stolen from him a tiara.

A dozen hawkers who had been announcing news of a
nonexistent anarchist bombing at the Madeleine have
been arrested.

On Place du Pantheon, a heated group of voters attempted
to roast an effigy of M. Auffray, the losing candidate. They
were dispersed.

Arrested in Saint-Germain for petty theft, Joël Guilbert
drank sublimate. He was detoxified, but died yesterday of
delirium tremens.

The photographer Joachim Berthoud could not get over the
death of his wife. He killed himself in Fontanay-sous-Bois.

In political disagreements, M. Begouen, journalist, and
M. Bepmale, MP, had called one another "thief" and
"liar." They have reconciled.

In a café on Rue Fontaine, Vautour, Lenoir, and Atanis
exchanged a few bullets regarding their wives, who were
not present.

Women suckling their infants argued the workers' cause
to the director of the streetcar lines in Toulon. He was
unmoved.

The Yodtzes, of Bezons, were somewhat burned in a fire
from which they were rescued by two cuirassiers.

Ten years' hard labor were given Tournour by the court in
Nancy. The adolescent killed a traveler who employed him
as guide.

No more briar pipes. Their makers, in Saint-Claude, have
stopped work until they are paid better.

"If my candidate loses, I will kill myself," M. Bellavoine,
of Fresquienne, Seine-Inferieure, had declared. He killed
himself.

A thunderstorm interrupted the celebration in Orléans
in honor of Joan of Arc and the 477th anniversary of the
defeat of the English.

In the course of a heated political discussion in Propriano,
Corsica, two men were killed and two wounded.

In Bone, the courts and the bar have reestablished contact
with the prison, now that the typhus outbreak there has
been curbed.

Clash in the street between the municipal powers of
Vendres, Herault, and the party of the opposition. Two
constables were injured.

Despondent owing to the bankruptcy of one of his debtors,
M. Arturo Ferretti, merchant of Bizerte, killed himself
with a hunting rifle.

While thundering for the Republic, a 300-year-old cannon
exploded in Chatou, but no one was hurt.

The charge of embezzlement against the management of
the Toulon artillery amounts to nothing, according to the
manager's inquiry.

Scheid, of Dunkirk, fired three times at his wife. Since he
missed every shot, he decided to aim at his mother-in-law,
and connected.

Mme Vivant, of Argenteuil, failed to reckon with the ardor
of Maheu, the laundry's owner. He fished the desperate
laundress from the Seine.

Finding her son, Hyacinthe, 69, hanged, Mme Ranvier, of
Bussy-Saint-Georges, was so depressed she could not cut
him down.

The fever, of military origin, that is raging in Rouillac,
Charente, is getting worse and spreading. Preventative
measures have been taken.

In the second arrondissement, 27 violations have been
charged in three days against cabdrivers who demanded
excessive tips up front.

At Toulouse, the finale of the bailliffs' convention. Their
duties, said a speaker, are "delicate, dangerous, and insufficiently
compensated."
Due to their ardor during audits and polls, some congregants
and a voter have been sentenced, in Cholet and
Saint-Girons.

The May Day celebration in Lorient was noisy, but not
a hint of violence gave the slightest cause for police
intervention.

During a scuffle in Grenoble, three demonstrators were
arrested by the brigade, who were hissed by the crowd.

After finding a suspect device on his doorstep, Friquet,
a printer in Aubusson, filed a complaint against persons
unknown.

Sand and only that was the content of two suspect packages
that yesterday morning alarmed Saint-Germain-en-Laye.

The recalled mayor of Montigny, his wife, and a member
of the municipal council have been sentenced to prison
for strike-related offenses.

D., of the 8th Colonial Regiment, Toulon, who incited
inmates to riot in the correctional barracks, has been
given 60 days in jail.

Reprinted from Novels in Three Lines by Felix Feneon. Translated by Luc Sante. Translation © 2007 by Luc Sante. Used by permission of New York Review of Books.