Accessibility links
Hollywood Looking for a Piece of Bollywood Action India's billion-plus population is mad for movies, and Hollywood is hungry for a piece of the Hindi film market. Sony Pictures took the plunge recently with a highbrow romance — and found itself going head to head on opening weekend with a home-grown superstar.

Listen
Hollywood Looking for a Piece of Bollywood Action 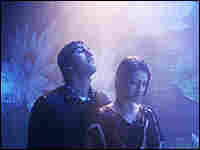 Ranbir Kapoor (left) and Sonam Kapoor star in Saawariya, the first Hindi-language film from a major U.S. studio. Below, one of the soundstage sets for the high-profile picture, directed by star Indian filmmaker Sanjay Leela Bhansali and based on a story by Dostoevski. Sony Pictures/SLB Films hide caption 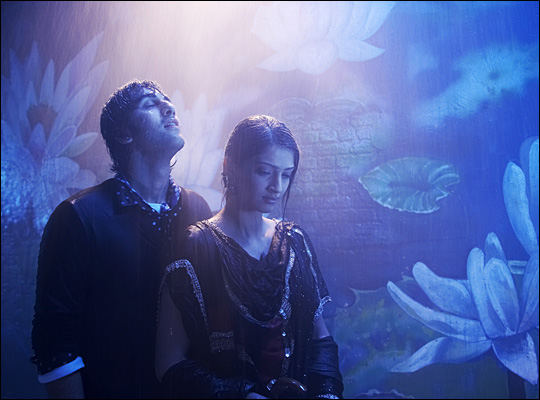 Ranbir Kapoor (left) and Sonam Kapoor star in Saawariya, the first Hindi-language film from a major U.S. studio. Below, one of the soundstage sets for the high-profile picture, directed by star Indian filmmaker Sanjay Leela Bhansali and based on a story by Dostoevski. 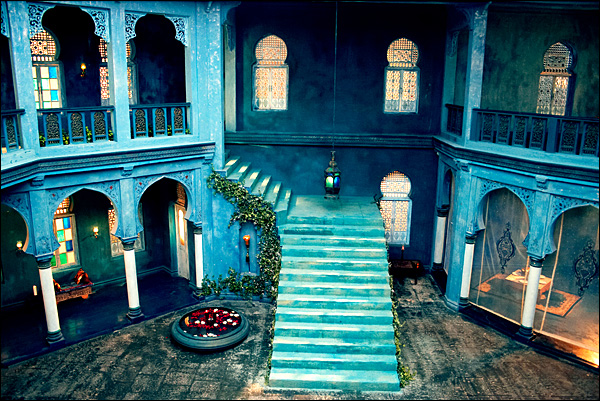 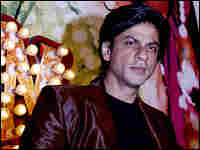 Hindi film star Shahrukh Khan; his blockbuster Om Shanti Om opened opposite Sony's picture and quickly outdistanced it at the box office. The Bollywood battle, fueled by India's media, became a litmus test for some who worry that Hollywood is preparing to muscle in on a healthy home-grown movie industry. Pal Pillai/AFP/Getty Images hide caption 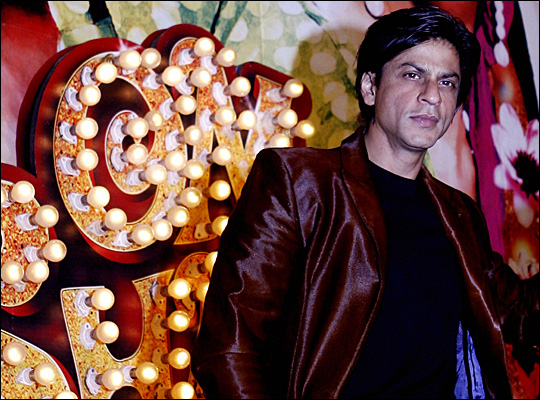 Hindi film star Shahrukh Khan; his blockbuster Om Shanti Om opened opposite Sony's picture and quickly outdistanced it at the box office. The Bollywood battle, fueled by India's media, became a litmus test for some who worry that Hollywood is preparing to muscle in on a healthy home-grown movie industry.

In India, a nation of more than 1 billion people, two national obsessions rule: cricket and movies. Going to a movie is a major family outing. Seats are assigned, as in an NFL stadium or a Broadway theater. Movies have intermissions; concessionaires sell gourmet sandwiches and samosas along with the popcorn. On one recent Friday night, a live three-man band played in the lobby of one Mumbai multiplex.

And though Hollywood likes to think of itself as the world's biggest movie town, those billion-plus movie-mad Indians are served by a home-grown movie industry — the entertainment machine some refer to as Bollywood — that annually puts out more than twice as many movies as its U.S. competition. Hollywood, no surprise, is hungry for a piece of that market.

At first, American studios tried a strategy that has worked in almost every other overseas market: dubbing Hollywood blockbusters into the local language. That approach brought only limited success.

"Culturally, India is much more connected with our own movies and our own stars, much like our food," says Uday Singh, managing director of Sony Pictures in India. "Here, 95 percent of the business is local film. So if you want to be a meaningful player ... you have to participate in that big chunk of business."

That's why Sony became the first major Hollywood studio to produce a Hindi-language film. They chose a script called Saawariya, or "Beloved" — a romantic tale based on Feodor Dostoevski's short story "White Nights." Back in New York, Sony executives loved it.

"I think that it's a magical vision," says Deborah Schindler, president of Sony Pictures' international production arm. "It is a fabulous, romantic, passionate tale of youngsters finding true love."

The movie was shot in India, on studio sets that evoked an aqua-and-blue version of Venice or St. Petersburg, with dark canals and low-lying bridges. The scenes call to mind the glamour of '40s and '50s Hollywood; there's even a lovesick actor singing in the rain.

Sony put all its corporate muscle behind the movie. There were billboards, promotions on Sony-owned TV stations, and plenty of radio airplay for the title song.

Sony scheduled Saawariya to open on the weekend of Diwali, a holiday that, like Christmas, is a big moviegoing time. Unfortunately, this year's Diwali season wasn't big enough for two major movies: On the same weekend, one of India's biggest stars premiered a film called Om Shanti Om.

Shahrukh Khan is to Hindi film as Brad Pitt is to Hollywood. All over the country, everyone was talking about billboards featuring Khan in an open shirt, revealing newly minted six-pack abs. And the title song from Om Shanti Om was just as big a hit as Saawariya's.

But Om Shanti Om had more than 30 major Indian stars in its cast. A sendup of the last 30 years of Hindi moviemaking, it was what Indians call a masala film, meaning it had a little bit of everything: comedy, tragedy, romance, drama, music, and a plot that turned on reincarnation.

In other words, it was as flashy as a Hollywood blockbuster like Pirates of the Caribbean, and Sony's first foray into the Indian market — the arty, literary, Bergman-esque Saawariya was hardly a match for it at the box office. The Indian media went to town: newspaper headlines, special reports on TV, and adjectives like "debacle" and "disaster."

"Sony stepped into territory which it doesn't understand," says Komal Nahata, editor of the Mumbai-based Film Street Journal. "And they did not think it fit to take the opinion of people who understand, because they wouldn't have made this mistake otherwise."

Audiences came out in record numbers for both films on opening weekend. But as the reviews poured in, ticket sales tapered off for Sony's movie and kept rising for Om Shanti Om. Megastar Shahrukh Khan suggested in interviews that seeing his film was a way to fight against a Hollywood giant trying to take over the Indian film industry.

Sony's experience may prove a cautionary tale for all the other Hollywood studios eyeing the Indian film market — Warner Bros., Fox, Viacom and Walt Disney among them.

Disney's Roadside Romeo, its first animated feature for the Indian market, is due in summer. There's already an early trailer, with the lead character — a dog named Romeo — trying out for a part in a movie.

Disney's strategy is different from Sony's. Animated features are new to India, and Disney — internationally known for its animation — partnered with one of India's best-known studios, Yash Raj Films.

"When we go to animation, that is an area that we don't have expertise in," says Yash Raj CEO Sanjeev Kohli. "We felt the need, and it would bring a lot of value to the product if we tied up with the world's leader in that area. And there is no better name than Disney at all."

The consulting firm PricewaterhouseCoopers predicts that India's film industry will more than double in size over the next four years, from just over $2 billion dollars in revenue to close to $4.5 billion. With numbers like that, it's no surprise that all the big American studios want a cut.

"I just hope that this one bad experience doesn't put off Sony or other studios," Nahata says. "Of course, anyone who is investing in Bollywood is great news for Bollywood."

Not to worry: Sony executives say they plan on making more movies in Mumbai. There's even a sense that one of these days, movies from India may become as much of a force in the world as Hollywood pictures.

Bringing Bollywood To The U.S.

Bringing Bollywood To The U.S.

An Indian conglomerate has acquired more than 200 movie screens across the United States in the past year. The company, Reliance, is using the theaters to showcase Indian films. Now it's grabbing headlines for reported plans to set up a new movie venture with Steven Spielberg.

One of India's largest conglomerates has been making headlines in the United States because of its reported plans to set up a new movie venture with Steven Spielberg. The company is called Reliance. It's based in Mumbai, formerly known as Bombay. Its $500 million investment in a new movie-making venture with Spielberg has not been confirmed, but as NPR's Asma Khalid reports, the Indian company is already slipping into U.S. cinemas.

ASMA KHALID: We're at the movies in Edison, New Jersey. The smell of buttery popcorn fills the air, but the concession stand at Movie City 8 also sells lassis, an Indian yogurt drink, and samosas, a fried dumpling snack. And while half the movies at this multiplex come from Hollywood, the other half come from Bollywood. That's India's multibillion dollar film industry. Tonight, one of the big hits is "Love Story 2050." Like most Bollywood movies, boy meets girl, they fall in love, sing, dance.

KHALID: This movie's distributed by the Indian media company Reliance. Reliance also operates this multiplex. Over the last year, Reliance has acquired more than 200 screens across the U.S., mostly in cities with large south Asian populations. And it bought a majority stake in a U.S. cinema company called Phoenix to manage the operations.

Mr. ZACHERETTI: In some of the theaters that we're playing the Indian films, they can outgross the top Hollywood product of that week two to three to four times.

Mr. ZACHERETTI: The loyalty is just phenomenal. We see people driving 40 to 50 miles to come see these films.

KHALID: At Edison's Movie City 8, the air conditioning's not working. That's typical of the run-down mom and pop theaters that show Indian films. But Reliance plans to spend a million dollars on new seats, new carpeting, new bathrooms, a new projector and hopefully working air conditioning. It's planning similar upgrades at other theaters, but the goal is not just to improve the Indian moviegoing experience. Reliance is building up a chain of cinemas to distribute its own films.

Mr. UDAY KUMAR (Reliance Movie Investments): We realize that U.S. is a very big and key market for cinema from India, and we found that the Indian cinema suffered because of lack of good theaters.

KHALID: That's Uday Kumar(ph). He runs Reliance's movie investments here. He admits this is an experiment. But Patrick Frater, Asia editor at the entertainment publication Variety, is skeptical the company can find appeal outside immigrant communities.

Mr. PATRICK FRATER (Asia Editor, Variety): India cinema industry has been talking about the day that the Bollywood industry will cross over into mainstream globally for years and years, and it hasn't happened.

KHALID: He thinks Reliance's foray into the U.S. isn't really about making money. It's more about going global, something many of India's top corporations are trying to do now.

Mr. FRATER: They want to learn the U.S. market from the inside. It's much easier to do that if you're actually running a business rather than looking in from the outside and saying, hmm, I think that's how it works.

Mr. KUMAR: The focus of the group is now to make this business a global business, rather than just an India-centric business.

KHALID: Acquiring a couple hundred rundown movie screens might seem like a minor move, but Reliance is also reportedly investing in a new movie venture with Steven Spielberg. And the company's struck agreements with production houses run by top U.S. actors like George Clooney. It's all part of a multi-pronged approach to becoming a more prominent player in the global movie industry.