Accessibility links
Climate Talks Urge Quick Cut to Global Warming The high-level portion of the United Nations climate talks start in Bali, Indonesia, with pleas for urgent action from countries to help reduce global warming. Australia made a splash by signing on to the Kyoto treaty, while the U.S. is the only industrial nation to boycott the international treaty.

The hero of the day was Australia's new prime minister, Kevin Rudd, who signed his country on to the Kyoto treaty. By contrast, the United States was the subject of quiet scorn.

Rudd told the assembled dignitaries that when he became prime minister last week, his first official act was to sign the documents committing his nation to the Kyoto Protocol, reversing the policy of his predecessor, John Howard, who had kept Canberra in virtual lockstep with Washington on the subject of climate change.

With Australia's assent, that leaves the United States as the only major industrialized nation not to have agreed to Kyoto emissions targets. Rudd did not criticize the United States directly, but he expressed a sentiment that is shared by many of those attending the climate talks.

The speeches launching the high-level talks sounded familiar to people who have been following this discussion since climate change was put on the international agenda in Rio in 1992. Since then, data has continued to pour in, bolstering the case of scientists and policymakers who have argued that global warming is real. United Nations Secretary General Ban Ki-moon pointed to this year's report of the Intergovernmental Panel on Climate Change to support his grave concerns for the planet.

"The science is clear: Climate change is happening. The time to act is now," Ban said, calling climate change the defining challenge of our age.

Passionate words also flowed from the man responsible for running the conference, Yvo de Boer, the executive secretary of the United Nations Framework Convention on Climate Change. De Boer wondered aloud why military officials worldwide were preparing for a world disrupted by climate change but nations weren't doing more to prevent a disaster. He did not name the United States, but his final thought did quote an American hero.

"In the words of Abraham Lincoln, 'You cannot escape the responsibility of tomorrow by evading it today,'" he said.

The United States has stuck to its long-held position of opposing legally binding emissions targets. Washington's negotiators continue to argue that the U.S. is helping the world by pushing the development of technologies that will be necessary to generate energy and power cars without putting so much carbon dioxide into the air.

Paula Dobriansky, who heads the U.S. delegation, made it clear at a news conference that the issue is not just about the environment – it is about trade and competitiveness with countries such as China, which is part of the Kyoto treaty but, as a developing country, is not required to limit its emissions.

"We want the world's largest economies, including the United States, to be part of a global arrangement. An approach in which only some are required to act cannot be environmentally effective," she said.

Dobriansky said the U.S. wants to leave the meeting with a global commitment to negotiate a new international agreement by the year 2009. That is a year into the administration of the next U.S. president. 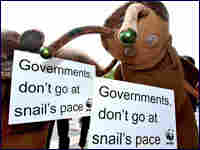 One of the most challenging issues at the U.N. climate talks is how to get the world's biggest greenhouse emitters — such as the United States and China — to take significant action to cut emissions. A look at what else is on the agenda in Bali and proposed solutions.

Delegates from around the world are meeting this week in Bali, Indonesia, to discuss how to tackle climate change after the Kyoto Protocol expires. NPR correspondents Richard Harris, on the scene in Bali, and Christopher Joyce file posts on the atmosphere outside the meeting rooms.