Accessibility links
'I Am Legend' Will Smith races around an eerily vacant New York in this latest adaptation of Richard Matheson's novella. The scares are effective for a good long while, and there's an intriguing terrorism subtext for anyone who wants real-world relevance. 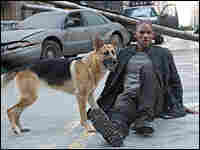 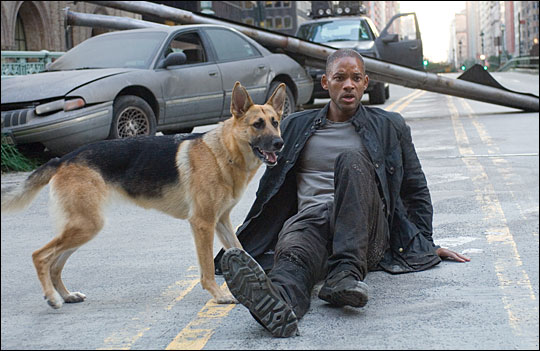 Apocalyse soon: Will Smith and friend in a post-plague New York.

Will Smith races around an eerily vacant New York City in this latest Hollywood adaptation of Richard Matheson's novella. A virus modified to cure cancer has mutated into a deadly strain that kills most victims and turns the rest into zombies — who, as zombies generally do, seem to like to slam their heads into plate glass when they're not slaughtering innocents.

The isle of Manhattan — Ground Zero for the plague — has been quarantined, with all its bridges and tunnels dynamited, and Smith, a virologist searching for a cure, is its last uninfected resident. He wanders a New York where he can hunt wild deer grazing on weeds growing in the middle of 5th Avenue during the day, but where, by night, he's forced to hole up with his dog in a barricaded apartment to avoid the city's light-phobic, blood-thirsty, infected residents.

Filmmaker Francis Lawrence and an army of digitizers have stripped New York of its inhabitants to pretty breathtaking effect — the opening sequence is a wow — and Smith is terrific at conveying what it might be like to be deprived of human contact for three years while constantly fearing for your life. The scares are effective for a good long while, and there's an intriguing terrorism subtext for anyone who wants to read a little real-world relevance into the story.