Accessibility links
Poll: Parents Still Trust Cold Meds for Kids This fall, an FDA advisory committee recommended that cold medicines no longer be marketed for children under age 6; clinical trials found these over-the-counter drugs were no better than a placebo. An NPR/Kaiser/Harvard poll finds that most parents still cast a cautious vote of confidence in the drugs. 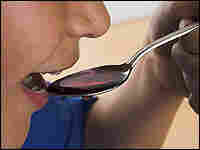 In the wake of clinical trials that found over-the-counter cough and cold medications were no better than a placebo in children under 6, an NPR/Kaiser/Harvard poll finds a majority of parents are aware of the controversy, but are still confident in the safety and effectiveness of these medicines. iStockPhoto.com hide caption

What Parents Plan to Do 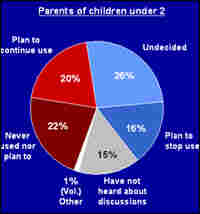 Participants were asked, 'Which of the following best describes your reaction to recent news on the safety and effectiveness of over-the-counter cold and cough medicines for children?' NPR/Kaiser Family Foundation/Harvard School of Public Health hide caption 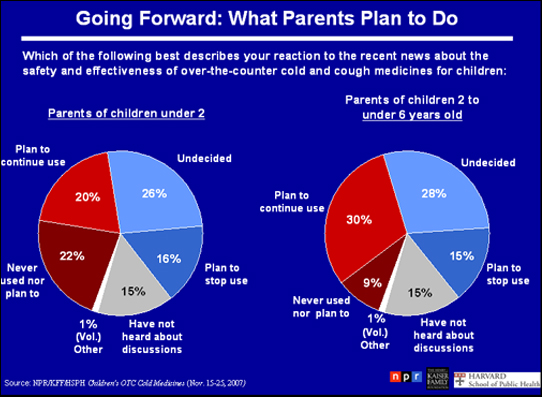 Participants were asked, 'Which of the following best describes your reaction to recent news on the safety and effectiveness of over-the-counter cold and cough medicines for children?'

Most View Meds as Safe 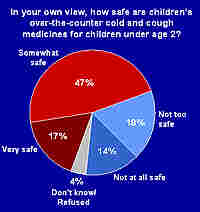 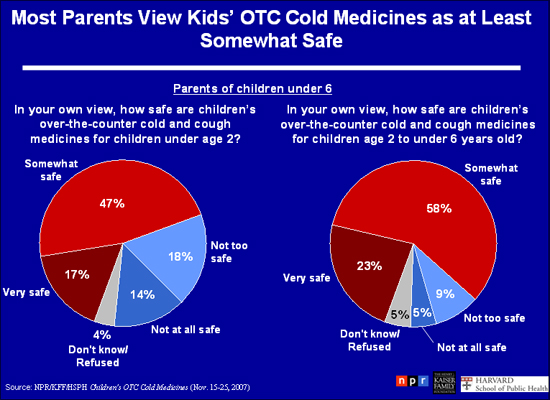 Most parents polled said they believed OTC medicines were somewhat safe for children under age 2.

See a Summary of Results, Charts
See the Full Results

A new poll from NPR, The Kaiser Family Foundation and the Harvard School of Public Health finds that most parents cast a cautious vote of confidence in the safety and effectiveness of over-the-counter cough and cold medications.

Shannon Dalrymple of Louisville, Ky., knows all the tricks of the trade for treating her children's cold symptoms. She has used a vaporizer, steam baths, and gives lots of TLC.

But when this isn't enough, she resorts to cold medicines.

"I'm not a person who thinks they cure a cold," Dalrymple says, "but I've seen them give my children relief."

A solid majority, 58 percent, of parents polled by NPR, Kaiser and Harvard say they think over-the-counter cold medicines are at least "somewhat safe" for children between the ages of 2 and 6 years old. And an additional 23 percent of parents believe the medicines are "very safe."

Dalrymple says she takes her time and confers with her pediatrician when she's buying medicines for her children. "I'll even talk to the pharmacist if I'm confused about the medicines," she says.

From play groups to chat rooms across the country, there seems to be a lot of discussion about the use of over-the-counter cough and cold medicines. The NPR/Kaiser/Harvard poll found that 86 percent of parents are aware of the controversy.

"Once they pulled these items this fall," Dalrymple says, referring to the drug manufacturers' decision to withdraw infant formulations from the market, "that's when people really started talking, at least around me."

In late October, an advisory committee to the Food and Drug Administration recommended that drug manufacturers stop marketing the drugs for children younger than 6.

The recommendation followed an analysis by a group of pediatricians of six clinical trials of over-the-counter cold medicines. The trials showed the drugs are no more effective than placebo in relieving symptoms.

The FDA, which usually follows the advice of its advisory committees, has not yet decided whether to put any restrictions on cold medicines.

Each year, about three children die after taking cold medications. Because most of the deaths are linked to overdosing, some parents think families need to be educated on how to use the medicines properly.

"I think most people are smart enough to figure it out," says Todd Schwartz of Eugene, Ore. "But I do think there's a segment of the population, despite all the information from drug companies and doctors, that will still make mistakes."

Like Schwartz, 51 percent of those polled think parents and their doctors should decide for themselves whether over-the-counter medicines seem effective.

Schwartz says he believes the FDA would be going too far if it restricted sales of these drugs.

"That's like saying we need to take highways away because some people can't drive," Schwartz says.

Some pediatricians and public health advocates are advising families not to use cold and cough medications at all, based on the findings of clinical trials.

"In all of those studies, there was no benefit to the cough and cold medications," says Dr. Janet Serwint, a pediatrician at Johns Hopkins University.

And the medicines can be dangerous even at recommended doses. Serwint says she has treated children who felt that bugs or spiders were crawling on them after taking cold medicines.

She has also treated patients who have had arrhythmias, or irregular heartbeats, after taking the medicines correctly.

Serwint was among a handful of pediatricians who drafted a petition to the FDA earlier this year asking it to halt the marketing of the drugs to young children.

Drug makers maintain that the medicines are safe and effective when used as directed, and shouldn't be restricted.

But Sirwent's hope is that more pediatricians will advise their patients against the drugs.

The NPR/Kaiser/Harvard poll found that 62 percent of parents of children under 6 say their doctor has recommended using an over-the-counter cold or cough medicine for children.

Penny Zmikly of Canton, Mich., says her pediatrician is not among them. She says that when she has asked her doctor what to give her 2-year-old for a cold, her doctor says the best thing is to let the virus run its course. Zmikly says she's learned that she doesn't need to medicate every sniffle or sneeze.

Zmikly says she uses some cold medicines with her 4-year-old twins when symptoms are severe, and she thinks they get some very temporary relief. But if her doctor discouraged her, or said the medicines were unsafe, she says she would listen.

This meshes with another finding in the NPR/Kaiser/Harvard poll. It found that a solid majority of parents say their pediatrician is their most trusted source of information about these drugs.