Accessibility links
Freddy Cole and Roberta Gambarini in Concert Jazz vocalist Roberta Gambarini sails like an angel on top of a song, while Freddy Cole's baritone voice rides low, full of experience but still sentimental. Hear them both in a concert recorded live for JazzSet. 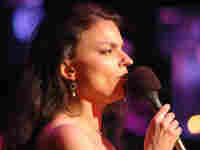 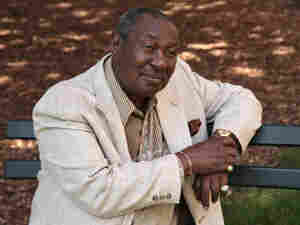 At holiday time, the air is full of voices, and we have a perfect pair. Roberta Gambarini sails like an angel on top of a song, while Freddy Cole's baritone voice rides low, full of experience but still sentimental. His 2007 release Music Maestro Please with the Bill Charlap Trio is nominated for a Grammy.

Born in 1931, Cole is the younger brother of Nat "King" Cole. Growing up in Chicago, he saw Duke Ellington, Count Basie and Lionel Hampton visit his home. In 1951, Cole moved to New York, with an interlude in Boston to earn his Master's Degree at New England Conservatory. Since the early '70s, he's lived in Atlanta.

Singing and playing piano in saloons and bistros, Cole mastered a great repertoire, and since the 1990s, he's shared it, releasing one fine CD after another. Some key albums include I'm Not My Brother, I'm Me, his tribute to Michel Legrand, Le Grand Freddy and Because of You, a tribute to Tony Bennett.

Cole's songs are often about love, his style conversational and swinging. As he says in opening this JazzSet, "Good evening, and welcome to an invitation to relaxation — all music, very little chatter."

Roberta Gambarini is at the beginning of a great career. Born in Torino, Italy, her father filled the home with music from his record collection, including the works of Don Byas, Duke Ellington, Count Basie and Jimmy Lunceford. As a little girl, Gambarini would sing along, note for note, to the solos.

Gambarini moved to the U.S. to study in Boston, and soon came to New York, where she bases an international career. Her first release, Easy to Love, was Swing Journal's #1 Vocal Record of the Year in Japan in 2005.