Accessibility links
Iraqi Children's Week Passes Unmarked for Many The Iraqi government estimates there are 4 million orphans in the country, but only 700 are living in institutions. The streets are filled with children, and survival is a constant struggle. But some are still making time to go to school. 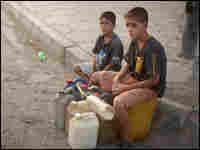 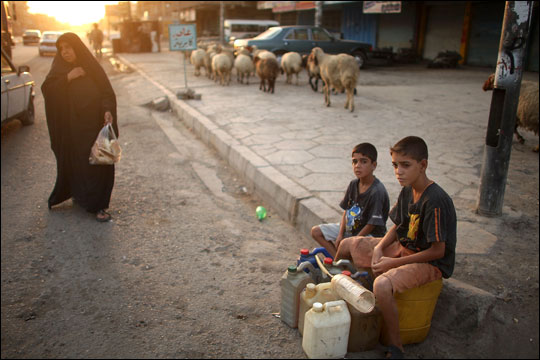 Boys sell gasoline to morning customers on a street corner in August 2007 in the Hurriya neighborhood in Baghdad, Iraq.

For the second year in a row, the Iraqi government is observing what it calls "the week of the children."

In some parts of the country, it will mean concerts and recitals. But in others, the week will pass unmarked, with many children orphaned, living in poverty and out of school.

One of these children is Baha. The 11-year-old's day begins early in the morning, when he leaves home to collect cans in the streets of Baghdad. When he gets back, he has to get ready for school.

Baha's mother left her children and ran off with another man after their father was imprisoned. Her seven children, ranging in age from 6 to 16, now live with their grandmother, Nisma Merza.

Merza has had to resort to crafty entrepreneurialism to keep her household running. She sends the children out every morning before school to collect empty soda cans, aluminum pots and metal to sell at the market.

After classes, Baha goes back to work at a kebab shop until 8 p.m. When he comes home, he tries to concentrate on homework.

The only other adult in the house is Merza's 56-year-old son, Riyadhh Hassan, a watchmaker with an alcohol problem.

Hassan says that some of the children also beg on the streets, asking people for money.

"It's not shameful to do that," he says, "because even God tells people in the Koran to be kind to beggars."

Children in the Streets

The sight of dirty children pressed up against car windows at traffic intersections is as common in Baghdad as the permanent layer of dust that blankets every surface, every statue and every bridge in the city. Children take advantage of the multiple checkpoints that slow traffic along Baghdad's main streets to hawk everything from Kleenex tissues to cigarettes and chewing gum. Others stand along the sides of the roads, selling black-market gasoline.

There's no one to tell them to go home or to go to school.

Assam Thafir runs a bicycle shop in Zafaraniya, close to Nisma Merza and her brood. He says he asked the children why they are not in school, and they said no school would accept them.

"They mingle with the wrong people now," he says, "and they teach them bad things, you know. I don't have to tell you."

Millions of Orphans in Iraq

Part of Iraqi tradition obligates relatives to take in orphaned or abandoned children, rather than put them into orphanages. The government says it has only 700 children in its institutions, even though the Ministry of Labor and Social Affairs says there are more than 4 million orphans in the country.

Abeer Chalabi heads the state orphanages section at the ministry. She says the number might be exaggerated, "but to have so many is a catastrophe."

She says she led a campaign after the U.S. invasion to gather street children and place them in government institutions, but that program has now been abandoned. With a government in disarray and a society damaged from years of war, Chalabi points out that it's the children who pay the greatest price.

"If you look at the international convention for the protection of the children's rights, to which Iraq is a signatory, I just wonder, how many articles of that convention has the government put into practice," she says. "I'm sure the answer is none."

Back at his grandmother's home, Baha slowly finishes getting ready for school. He earns around $2 a day selling cans. His drunken uncle calls him lazy and wants him to drop out of school. But Baha says he will keep going to classes, even as he juggles two jobs and homework.