Accessibility links
Made in China: Hip-Hop Moves East Hip-hop is huge in China, but most of what people hear is imported. Until recently, there hasn't been a real Chinese hip-hop scene and style. New spaces like The Lab in Shanghai and newly formed multinational hip-hop groups like Red Star could change all that — and soon.

The Lab and Red Star

Watch a video about The Lab, a Shanghai nonprofit studio devoted to developing Chinese hip-hop
Listen to Red Star's songs on its MySpace page 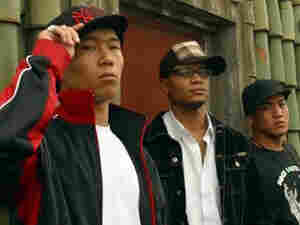 Hip-hop is huge in China. And, as in other parts of the world, certain aspects of hip-hop culture have made their way onto Chinese billboards and pop charts, as well as into Chinese theme songs and television advertising. But Chinese rappers still aren't getting on the airwaves.

Kyle Ching, an American who came from L.A. to China to chase China's business boom, is working on the debut album of Red Star, a Shanghai-based, multinational hip-hop trio. He says he does it for the music, not the money. "It is a new place to do business, [but] it's not really the place to come and make a million bucks off of selling hip-hop music. It's not the place to come to make money off making music, period."

For one thing, it's hard to get airplay where radio stations prefer saccharine pop music. And there are far fewer radio stations in China than in the U.S. The government still keeps a tight hold on radio licenses. But Ping Ke, a former radio DJ who quit because he was bored playing the same songs over and over again, says that the Internet has changed everything. Now he can not only podcast, but also listen to radio stations from all over the world.

"Also, most importantly, the Internet is having an impact on radio," he says. "If it caused a big change in the U.S., I think it's causing an even bigger change here in China, because in the past, we couldn't find out as much information as Americans. But now, everybody's more or less the same."

Ping Ke says that 20 years ago, when he was listening to rock music, the government wouldn't allow it on the radio. He says that back then, the government tried to control the airwaves for propaganda, but now "it's because of commercial reasons. For example, I have to do this and that just because my program has a sponsor."

One person trying to nurture Chinese hip-hop is DJ V-Nutz — also known as Gary Wang, a Chinese DJ who recently opened The Lab, a nonprofit music studio meant to help Shanghai develop its own hip-hop style. Wang says he thinks the Shanghai hip-hop scene still has a ways to go.

"I would say we don't have a Chinese style yet," Wang says. "If you really want me to say, what is Chinese style, I would say it's young, local kids really enjoy Western things right now. Then maybe after 10 or 15 years, maybe they can have their own style."

But in The Lab, young Chinese rappers like Red Star's Tang King are learning about music and starting to make their own claims about Chinese style. "Adding your local style and adapting it to your country is important to making your own hip-hop," he says. "We should focus on how to combine Chinese and American hip-hop and create a hip-hop culture that really belongs to our own country."

A big part of that is encouraging Chinese rappers to rap in Chinese. Jeremy Johnston, who moved to Beijing nine years ago, has since joined the group Yin Tsang. "When we first started, people said, straight up, you can't rap in Chinese, Chinese does not work for rap," Johnston says. "And I said, 'What does that mean?' 'Chinese is not suitable for rap music because it's tonal.' To say anything won't work makes me want to do it even more. If you want to make hip-hop, do it. Do it in your own language."

As hard as the struggle to create authentically Chinese hip-hop is, Johnston, like other committed producers and rappers in China, wouldn't have it any other way. He says the scene there now is "kind of like hip-hop in the golden era. It's like hip-hop was before there was a bunch of money being made, because we aren't making a bunch of money. So you can't brag about, 'Oh, look at my chain,' if you ain't got a chain; you can't brag about going and buying bottles in the club if you aren't. So Chinese kids, they rap about what they do. On that note, most Chinese kids keep it real."