Accessibility links
Preservation Hall Recordings Survive the Waterline The sound of New Orleans Jazz is unmistakable. If you're in the Crescent City, there's one place you're sure to find it: Preservation Hall. A new, jam-packed box set celebrates the Preservation Hall Jazz Band master tapes that survived Hurricane Katrina. 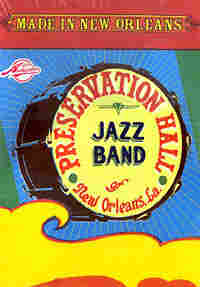 Clip from the DVD

Over in the Gloryland

Do You Know What It Means to Miss New Orleans? 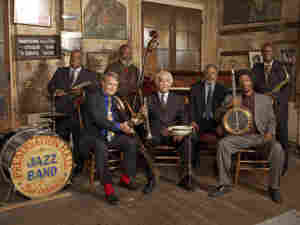 The sound of New Orleans jazz is unmistakable. If you're in the Crescent City, there's one place you're sure to find it: Preservation Hall, which is famous for music but not much to look at.

Bassist Ben Jaffe grew up in Preservation Hall. His father Allan founded it in 1961 as a way to keep New Orleans' signature sound alive.

"It's in the French Quarter, so it's located in the old part of New Orleans," Jaffe says. "It's a very humble environment. You actually walk in the old carriage way, and to your left, you'll find a very small room that fits about 70 people. Wooden floor, a few benches — it's very Quaker in that rugged way. There's no air conditioning or running water, no microphones or amplification. Musicians come four nights a week to play New Orleans music."

The idea for the Made in New Orleans box set actually began in 2004, but once Hurricane Katrina hit in 2005, the project took on a whole new meaning.

"The songs that we had recorded prior to this no longer had the same significance, and some of them didn't even fit into the kind of project I wanted to make anymore," Jaffe says. "One of the experiences that I had was going back to the old recording studio my dad used to record at, [Sea-Saint], Allen Toussaint's recording studio in the Gentilly area, which was one of the hardest-hit areas in New Orleans."

Jaffe feared venturing into Sea-Saint because he thought he wouldn't be able to find the treasure trove of master tapes. The studio had been badly damaged by the waters, and hundreds of recordings by The Meters, Fats Domino, The Neville Brothers and more were all under water.

"I felt like I was in a church that had been destroyed," Jaffe says. "I mean, this was my church, these were the bands that I grew up listening to, and they gave me all the joy of my life. To see something that was so precious gone forever — I haven't been able to process it."

Miraculously, all the Preservation Hall tapes had been stored above the top shelf, just three inches above the water line, and all survived. After this discovery, Jaffe decided that he needed to share these recordings with everybody. Even though the Made in New Orleans CD was originally meant to feature new music, Jaffe wanted to find a way to present this material as a cohesive whole.

Preservation Hall re-opened in April 2006. Its revenues are down due to poor tourism in New Orleans, but Jaffe perseveres in spite of a 70 percent loss.

"Keeping it open is not only a symbol to myself, but to the city, of how important this is to us and to the musicians of New Orleans. We're making an investment in our future — not just financial future, but our own personal future."