Accessibility links
Burials and Cemeteries Go Green Environmentally friendly funerals are catching on in some areas of the U.S. as an alternative to traditional burials. So-called "green burials" eschew embalming and fancy caskets in favor of a more biodegradable, natural return to the earth. 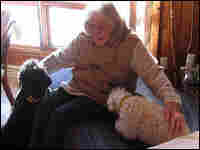 Ginny Boll, a 78-year-old former nun, said that when she dies, she wants her friends to hold a party to celebrate her life and then to bury her simply. Cheryl Corley, NPR hide caption 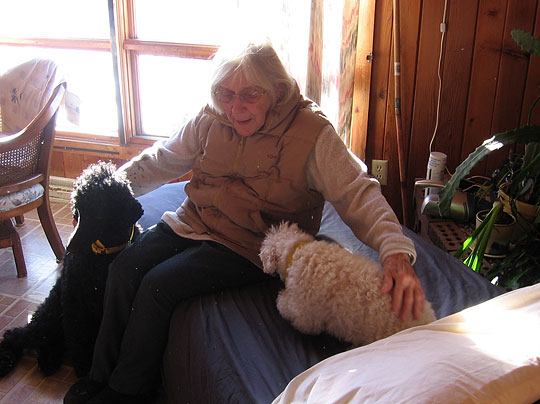 Ginny Boll, a 78-year-old former nun, said that when she dies, she wants her friends to hold a party to celebrate her life and then to bury her simply. 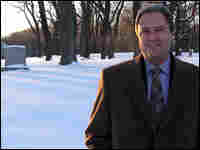 Tom Kursell, president of the Forest Home Cemetery in Milwaukee, said he is planning to dedicate a two-and-a-half acre meadow full of native Wisconsin grasses to green burials as early as next spring. Cheryl Corley, NPR hide caption 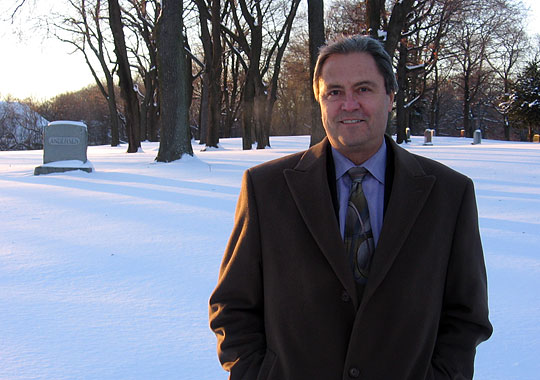 Tom Kursell, president of the Forest Home Cemetery in Milwaukee, said he is planning to dedicate a two-and-a-half acre meadow full of native Wisconsin grasses to green burials as early as next spring.

What Is a Green Burial?

What exactly makes a funeral green? Read more about some of the environmental, health and legal issues involved.

Ginny Boll loves life. The 78-year-old former nun operates a dog-grooming business in Wisconsin in a small shed near her home on her woodland property. When she dies, Boll says she wants her friends to hold a party to celebrate her life and then to bury her simply.

She's not interested in being embalmed or laid to rest in a fancy casket. Boll wants to return to the earth in a more natural way.

So-called "green burials" are catching on in some areas as an alternative to traditional burial. They are simple, often more affordable and environmentally friendly.

Formaldehyde-based embalming is taboo in green burials, as are concrete burial vaults. Caskets are made of biodegradable material, and sometimes the deceased are wrapped in shrouds alone.

According to the National Funeral Directors Association, the average cost of a traditional funeral is $6,500 plus cemetery costs.

A green burial can be significantly less costly — in some locations, it's only a few thousand dollars; the burial of cremated remains is even less.

Cremations — which are also inexpensive — are increasing in number. But Joe Sehee, executive director of the Green Burial Council, says that unlike with cremations, green burials present little possibility that mercury or other potentially hazardous emissions will be released.

Sehee says it's up to individuals to decide how green they want their end-of-life process to be, but he believes current funeral practices are reason enough to go green.

"We bury enough embalming fluid to fill eight Olympic-size swimming pools, enough metal to build the Golden Gate Bridge, and so much reinforced concrete in burial vaults that we could build a two-lane highway from New York to Detroit," Sehee said.

It wasn't until the Civil War — when bodies were transported from the battlefield to home — that current funeral practices became popular. So in many ways, green burials are simply a return to traditions of the past. And some religious groups adhere to those practices even today.

The concept of green burials, though, is more popular overseas. In Great Britain, there are 200 green cemeteries. In the United States, there's just a handful in a few states. The first, Ramsey Creek Preserve, opened in South Carolina in 1998.

Even so, there has been enough interest in these alternative burials that some conventional providers are starting to think green. That includes the Forest Home Cemetery, a historic landmark in Milwaukee. Cemetery President Tom Kursell says a two-and-a-half acre meadow full of native Wisconsin grasses will be used for green burials as early as next spring. That's where the process of "ashes to ashes" will take place at a much more rapid place.

Whether it's a conventional cemetery carving out areas for green burials, or burial grounds being created in an effort to preserve open space, Sehee says it's all connected to the same idea: One's final act can have meaning for a family while having less impact on the earth.

Q&A: What It Means to Have a Green Burial

When Six Feet Under character Nate Fisher was laid to rest in the HBO series, his unconventional funeral gave many viewers their first glimpse of eco-friendly "green burials." A scene in the series shows several characters carrying Fisher's shrouded body — sans casket — to a gravesite in the woods.

Since then, the movement to make funerals more environmentally friendly has grown. But what exactly makes a funeral green? Here, a look at some of the environmental, health and legal issues involved.

What is a "green burial?"

Green funerals shun chemical preservatives, traditional heavy metal and wood caskets, and other features of costly modern burials. Going green is billed as a low-cost, highly personal alternative to a conventional burial. Un-embalmed remains are put directly into the ground, either shrouded in cloth or buried in natural caskets made of biodegradable materials, such as cardboard, wicker and pine. Burial vaults – underground, concrete reinforcement used to ensure that graves do not collapse – are not used.

Where do green burials take place?

Usually, at cemeteries that aim to preserve the natural landscape. Some cemeteries also create a conservation fund to protect the burial area for years to come.

Why opt for a green burial?

The principle is to follow the natural cycle of life by returning the body to the earth and embracing the Biblical philosophy of "ashes to ashes, dust to dust."

Advocates also cite their reduced environmental impact over conventional burials, as well as land-preservation benefits and affordability. Traditional burials, they argue, are a waste of resources: Each year, cemeteries bury millions of feet of wood, thousands of tons of steel, copper and concrete, and hundreds of thousands of gallons of embalming fluids — which contain formaldehyde, a known carcinogen.

Not by federal law. Some funeral practitioners say embalming is vital for preventing the spread of disease. But the Green Burial Council — which has set standards for the practice — argues that "there is no evidence suggesting that embalming provides any public health benefits." In green burials, bodies are preserved using dry ice or a cooler for up to three to four days.

Advocates say water quality will not be jeopardized because, for the most part, harmful bacteria and viruses become inert within hours or days after death. To prevent any potential contamination, they say burial sites should be kept far from streams.

If the natural landscape is supposed to be preserved, how are graves marked?

Where are green burials held?

A handful of green cemeteries have sprouted up in a few states — including California, Florida, Michigan, New York, South Carolina and Texas. Many traditional cemeteries are also considering devoting areas to burials where remains are not embalmed and vaults are not used.

Ramsey Creek Preserve in northwestern South Carolina –- the first green cemetery in the U.S. — does not require a casket; instead, bodies may be wrapped in a shroud or blanket. Most graves there are hand-dug in order to protect plants and minimize the impact on surrounding land.

Cremation uses far fewer resources than burial. But the process involves burning fossil fuels, and it can produce emissions including carbon monoxide and mercury (from dental fillings). Some crematoriums are considering reducing their carbon footprint by participating in carbon-offset programs.

Those who want to bury cremated remains can purchase biodegradable urns. Some people also opt to add ashes to balls that are dropped onto memorial ocean reef sites, according to Grave Matters, a book on the natural death movement.

How much does a green burial cost?

At Ramsey Creek Preserve, prices start at about $2,000, which covers the cost of the burial site. A pine casket can cost $420, a cardboard casket as little as $50. According to the National Funeral Directors Association, the average cost of a traditional funeral is $6,500 — excluding cemetery costs such as a lot, vault and plot marker. Many funerals run well over $10,000.