Accessibility links
Flaxseed: The Next Superfood For Cattle And Beef? : The Salt After years of research, an animal scientist looking for ways to keep inflammation down in cattle came up with a novel approach: feed them flax. The flax in their food helps keep animals healthy and has an added benefit for people who later eat their meat: omega-3 enriched beef.

Flaxseed: The Next Superfood For Cattle And Beef?

Flaxseed: The Next Superfood For Cattle And Beef? 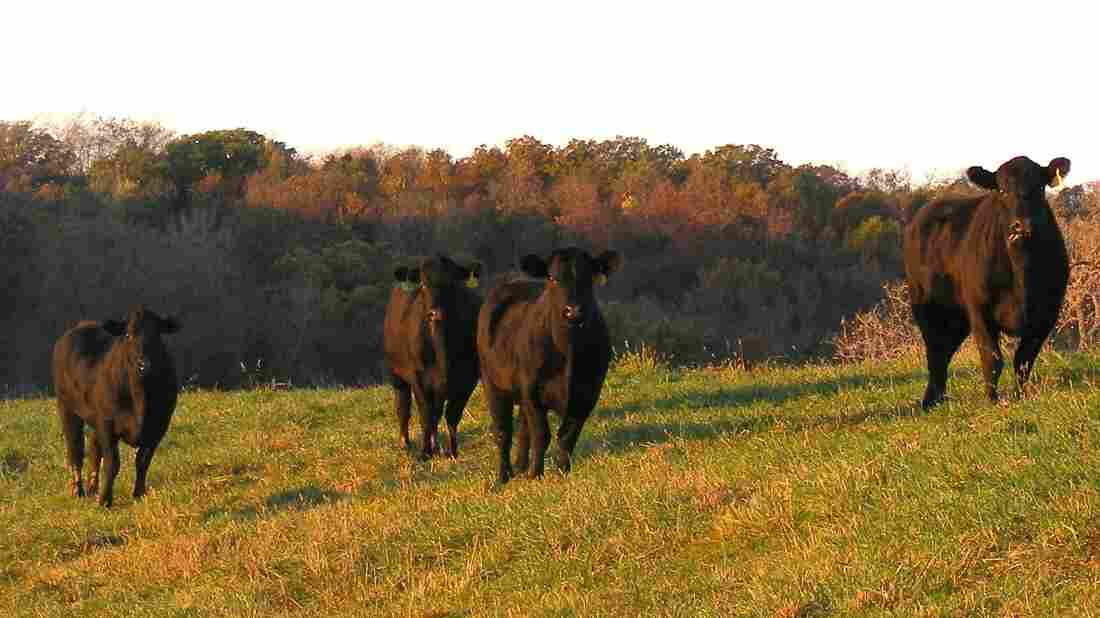 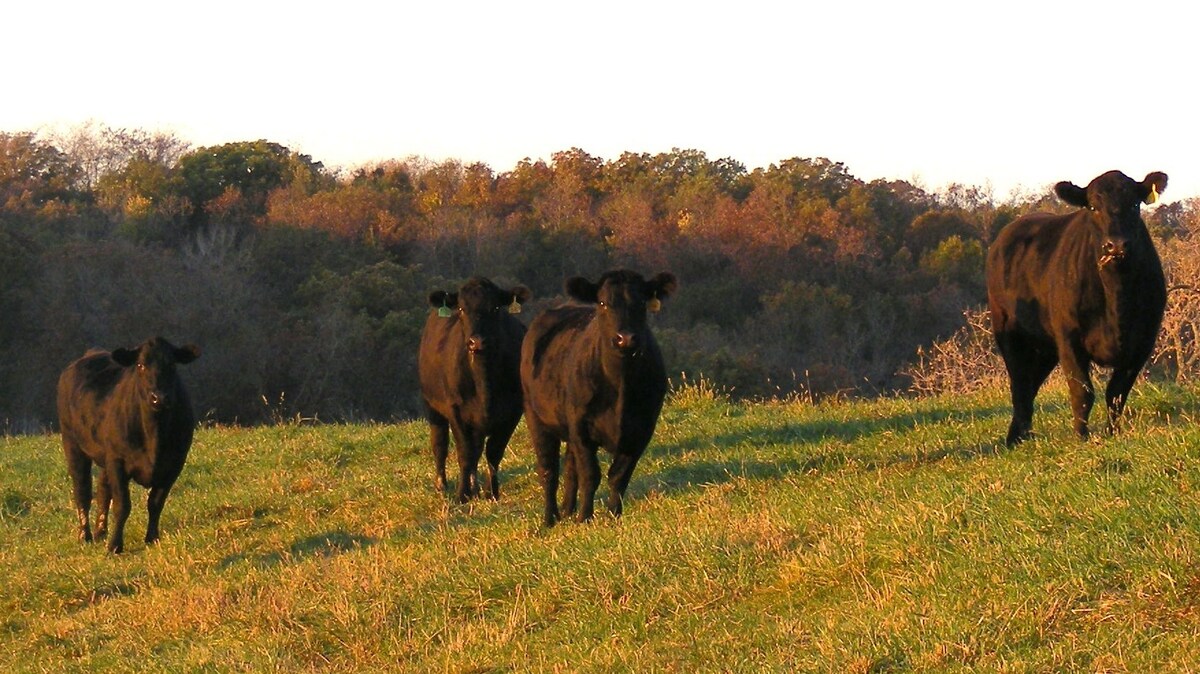 Heifers at Timber Ridge Cattle Co., an operation in Osceola, Iowa, that feeds some of its cattle flaxseed.

Flax is the oily seed usually spotted in the nutritional supplement or cereal aisles. It's marketed as a superfood because of its high levels of omega-3 fatty acids and fiber.

Omega-3s may do all kinds of good things for humans — like protect against Alzheimer's, heart disease and even cancer — so it seems reasonable to think they could also protect the health of animals.

That's what has Jim Drouillard, a professor of animal sciences and industry at Kansas State University, wondering whether flax might be good for beef cattle. In a series of experiments over the past 10 years, he found that feeding flaxseed to cattle in the five months before slaughter reduced inflammation and the need for antibiotics, and offset some of the negative effects of a corn-based diet. It also had an unexpected benefit for consumers.

"We were interested in improving the health of the animals, but we also saw that we could get a large increase in omega-3s in the [meat]," Drouillard tells The Salt.

Drouillard had stumbled upon omega-3 enriched beef, and some people who sell beef took notice. Their hunch was that consumers might prefer to get their omega-3s from beef rather than salmon, tuna or walnuts. The U.S. Department of Agriculture got on board, too.

"Assuming a lot of people are not going to eat flax or be able to afford salmon, one of our arguments [for flax-fed beef] is that there are a lot of people who like to eat beef," says Scott Kronberg, a research animal scientist with USDA's Agricultural Research Service who has done his own research on the benefits of flax-fed beef. 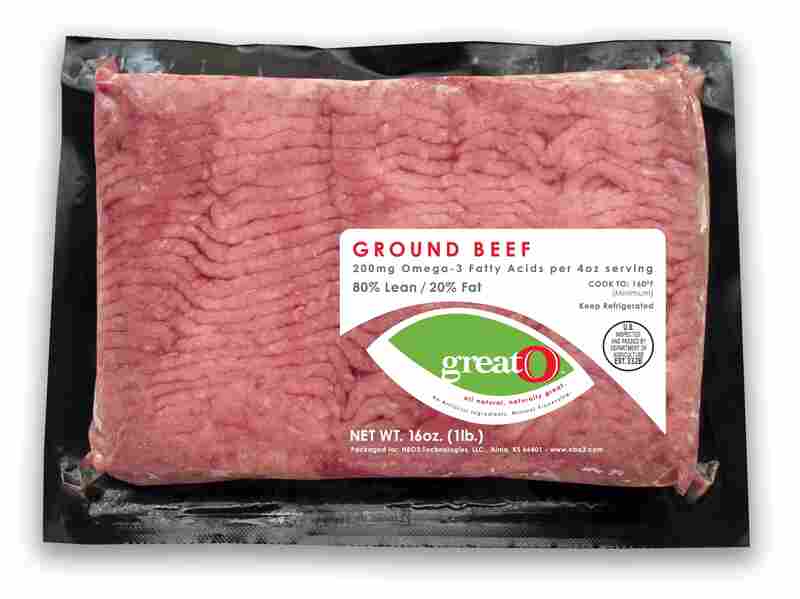 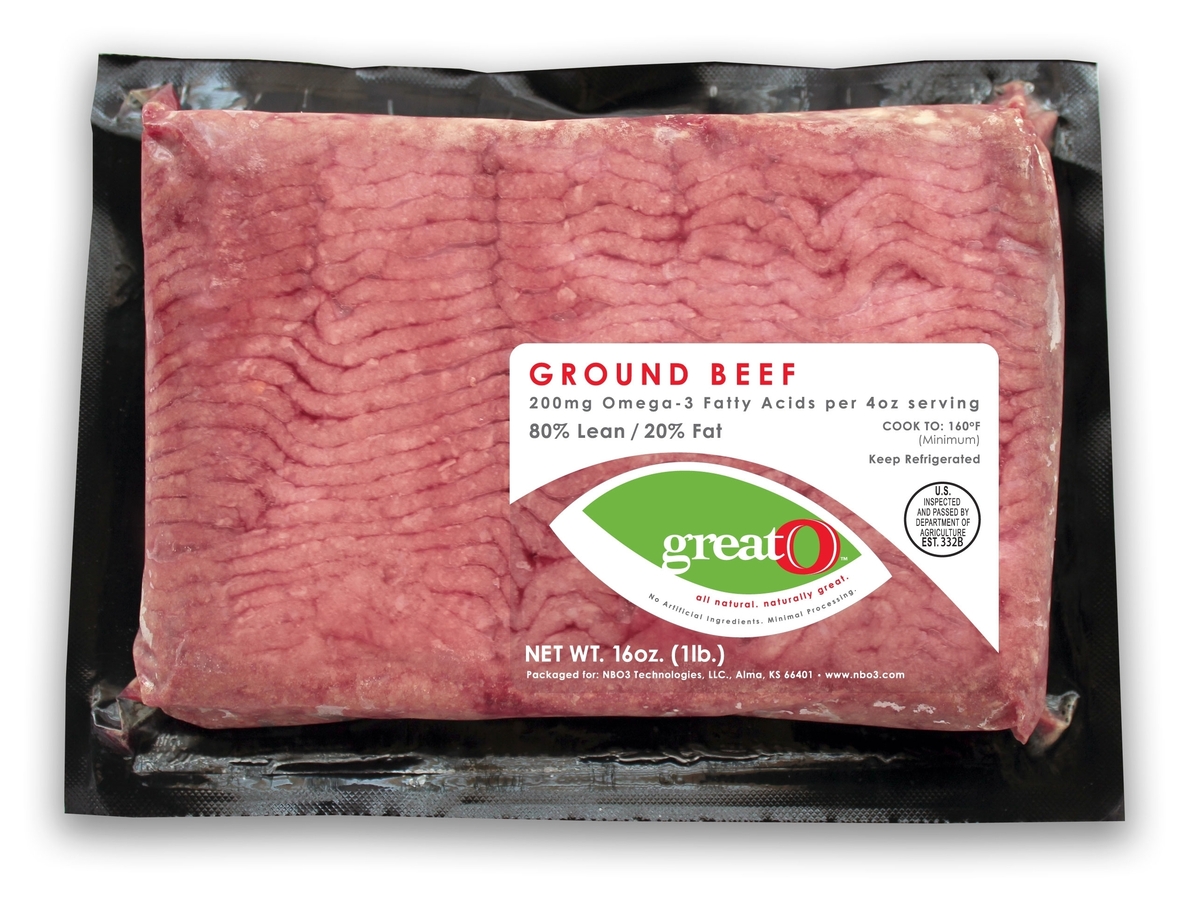 NBO3 launched its enriched ground beef at the Tops grocery chain in New York in March.

Earlier this year, a Kansas startup, NBO3 Technologies, launched its GreatO ground beef product at a grocery chain in Buffalo, N.Y. The company says a 4-ounce serving contains 200 to 350 milligrams of omega-3s (that's less than a fifth of the amount of omega-3s found in a similar portion of salmon).

And in Osceola, Iowa, Peter Woltz is giving his cattle flax for the omega-3 enriched beef sticks, summer sausage and jerky products he sells online and at farmers markets under the brand name Timber Ridge.

Before he got into the flax-fed beef business, Woltz raised cattle on a conventional feedlot. But he says he decided to sell it because it required too much crisis management.

"There's always the risk of disease," he says, "so you have a very active antibiotic program, and sometimes you give it to them whether they need it or not. That turned me off."

When Woltz heard that there were opportunities to produce "all natural" beef without hormones, additives or antibiotics, he was intrigued. "It sounded like a more sane, responsible way of producing beef," he says. Drouillard's flax feed also appealed to him as a way to make a niche product.

About one-fifth of Woltz's cattle now eat flax in the last 100 days before slaughter, when it makes up about 8 of their feed. And he says those cows are healthier than the ones that don't get flax.

"It was a real surprise to us how big the health benefits to the [flax-fed] herd were," he says. "Pinkeye outbreaks are very common in raising cattle, but in six years of doing this, I have never seen a flax-fed cow with pinkeye."

Woltz says he believes his herd of flax-fed cattle will continue to grow. "It's just a question of how fast do we want to expand the herd."

But Kronberg of the USDA cautions that the economics of flax-fed beef aren't yet well understood. "Flax is pretty expensive nowadays, and the profitability of beef production is not always so good," he says. "So it will be interesting to see how these companies do."

Across the pond in Europe, animal science researchers are enthusiastic about flax, too. They're feeding it to dairy cattle to improve their digestive health and reduce methane emissions from their belching.