Accessibility links
Got Snow? Add Bicycle. Jill Homer, Iditarod biker, shares the secret joys, fears and survival tips for cycling in serious snow. Hint: It helps to have the right brakes. Expect to go slowly. And watch out for moose tracks — those deep holes are just killer.

Jill Homer, Iditarod biker, shares the secret joys, fears and survival tips for cycling in serious snow. Hint: It helps to have the right brakes. Expect to go slowly. And watch out for moose tracks — those deep holes are just killer.

Laura Conaway who keeps our blog afloat with literally hundreds of posts a day is here today. She is bringing us up to speed on our On the Blogs segment. We got the music right this time. You know why, because I wasn't responsible to talk to it, they just fired it automatically. So here it is…

BURBANK: …with music and all, Laura Conaway On the Blogs, what have you?

One of the things we have is a little update on the MySpace suicide case.

CONAWAY: The lawyer for the woman who had some part in putting up the MySpace page that had the fake Josh Evans and wooed Megan Meier who then killed herself. The lawyer finally got back to us, and there's not a whole lot to it, but I'm going to go ahead and put it out there just to get the other side.

STEWART: And for people who may be just tuning in to the podcast today, how did we come to have a pet bat, Laura?

CONAWAY: Well, this guy named Bill Chappell in Washington D.C. who works for NPR noticed this little thing - it - really, it's the size of walnut - hiding in the crevice of a building in Washington and…

BURBANK: Right across from NPR D.C.. I recognized…

BURBANK: …the building where it is - around Seventh Avenue there.

CONAN: So we started blogging it and then we took some video of it and it's just now, it's a world-famous bat, so we'd like you to name it.

STEWART: It's kind of like "Our Moment of Zen" from the Daily Show at the end or like Sunday morning when they just have a beautiful piece of wildlife at the end. We have a bat - about 40 seconds of the cute bat on our Web site.

BURBANK: And it's - he doesn't even, I don't know if it's a boy or girl, the bat barely moves in the video and yet it is the most compelling thing I have ever seen. I've watched it now about 57 times and counting.

CONAWAY: And someone called in a haiku to the bat.

CONAWAY: Which I thought was pretty good.

The big thing I have going on today though is Jill Homer, the Iditarod biker, checked in. She is the person up in Juneau, Alaska who's planning to ride 350 miles on a mountain bike through the snow on the same trail that's used by the sled dogs. And I just frankly asked her, well, how do you deal with this much snow? So, she sent 10 top tips for biking in snow. And then I said, let's get real. So I called her and I said, Jill, how much snow is too much snow? What if you're on the race and you get two feet of snow?

Ms. JILL HOMER (Iditarod Biker): You get pretty stuck. A couple of feet, you wouldn't be able to ride a bike in that. So when things like that happen during the race, they usually get long periods where people are walking their bikes through the snow until a snowmobile goes through or a different trail-breaker go through and pack down the trails so they can ride.

CONAWAY: So, I mean, this is an athlete. She says things like I went for a longer ride than I expected and then I went up a mountain.

CONAWAY: And so I asked her, how many hours is she spending on the bike now?

Ms. HOMER: It's up to about between two and three on weekdays, and then I'm trying to do at least one long ride every weekend that I'm increasing. Right now, it's eight hours for my long ride and then that's going to keep going up a little bit.

STEWART: I can imagine her quads.

CONAWAY: It's kind of nuts, right?

CONAWAY: Yeah, eight hours and going up. And…

BURBANK: Quads of steel and tears of ice.

CONAWAY: Right. The last time we talked to her, she admitted to feeling a little bit of nervousness. She'd been tossed around in her sleeping in her backyard trying to practice winter camping. So I checked in with her again about that and it sounds like she's got the nerves under control. And then I asked, well, do you ever dream about the race?

Ms. HOMER: I do. I actually had a dream last night that I fell through some ice.

Ms. HOMER: You know, just things like that that I am fearful of, but learning about them helps me overcome that fear.

CONAWAY: She's a better man than I am.

STEWART: I think the blog is a little cathartic for her.

STEWART: I'm getting the sense that she's been - she's able to verbalize some of her fears in a way that maybe she isn't comfortable with, you know, the people who are helping her train or a boyfriend who's right in there with her.

BURBANK: Yeah, because we had this update from her a week ago where she was talking about how terrifying once you get stuck in the snow with a busted tire, this and that. And then when she got on the show and she had been blogging about it, she already sounded like she was getting better, working past it, and feeling stronger.

CONAWAY: I think that conditioning herself to accept the fear and to keep going despite the fear is a big part of her training, you know, just learning to - what do you do when you're terrified? Keep going.

BURBANK: You turn to THE BRYANT PARK PROJECT blog is what you do, npr.org/bryantpark.

Laura Conaway, our online editor, thank you so much.

STEWART: Two lessons on the way - one about grammar; one about what you can see at the movies. Stick around. 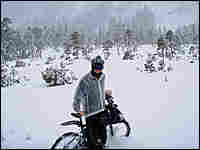 Believe it or not, you can ride out here. Courtesy of Jill Homer hide caption 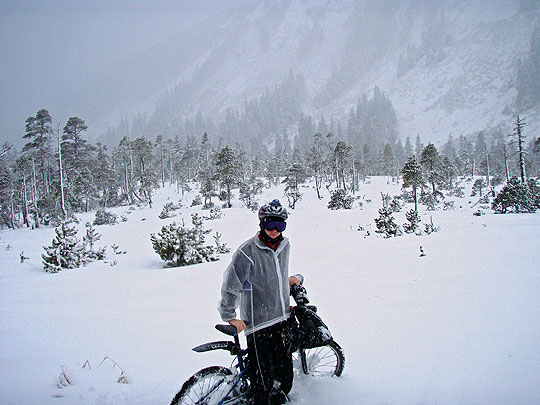 Believe it or not, you can ride out here.

Jill Homer of Juneau, Alaska, is training to ride 350 miles in the human-powered Iditarod. The race, which starts in February, follows the same route used by the famous dog sled teams.

1. Think surface area: If you've ever used snowshoes before, you know that all that mass at the bottom of your feet can mean the difference between coasting atop power or wading knee-deep in it. Snow bikes work they same way. They incorporate wide tires with a flat profile in order to distribute bulk (you) as evenly as possible, allowing for maximum floatation.

2. Fat is the new skinny. As long as there have been bicycles, there have been weight-weenie types trying to shave grams off wheels. Nowadays, it's not uncommon to see a spoke-free wheel sporting tires as thin as razors. But once you slice into snow, skinny tires might as well be razors. Snow-bikers know that fat means float, and have been developing bicycles to accommodate increasingly larger wheels for years. I predict that not too far in the future, someone will build a bicycle frame with room for motocross tires. Look for it.

3. There is no shame in walking. Cyclists hate to admit when they come to a hill or an obstacle they just can't conquer. I have seen cyclists blow out their knees and face-plant over logs just to avoid suffering the indignity of getting off the bike and walking. Snow-bikers have no such pretensions. We know that bikes are not ready-made for snow, and vice versa. If snow is too soft, or too deep, or too wet, we simply step off and amble along until we can ride again. We learn to enjoy it, like walking a dog, but without the constant slobbering.

4. When in doubt, let air out. Often, snowy trails are what we would call "marginally ridable." By letting air out of tires, you can increase the surface area and improve your floatation. Sometimes it means riding on nearly flat tires at a pace a snail wouldn't envy, but, despite what I said in the previous paragraph, it's still better than walking.

5. Learn your snow types. It's been said that Eskimos have dozens of different words of snow. Snow bikers also understand the myriad varieties: powder, sugar, corn, hard-pack, sandy, slushy, and so on. Each type comes with its own challenges. But understanding the nature of the white stuff you are trying to ride atop, you can adjust your riding and wheels to meet the conditions.

6. Don't be disappointed when you fail to set a land-speed record. Snow, like sand, puts up a lot of resistance, and snow bikers are not known for their speed. I have often heard accounts of cyclists who said felt like they were careening down a hill, only to look down and see they hadn't even breached the 10 mph barrier. In snow races, 10 mph is considered fast. Eight mph is average. Six mph is respectable, and four mph isn't uncommon. When asked to describe the nature of the 2006 Iditarod Invitational, which was plagued by cold temperatures and fresh snow, third-place finisher Jeff Oatley said, "It was about as intense as a 2.5 mph race can be."

7. All brakes are not created equal. When contemplating what brakes to put on their bikes, cyclists have all kinds of reasons to choose between disc or rim. But snow bikers, who often find their rims coated in a thick layer of ungrippable ice, have the best reason of all: Rim brakes could mean an icy death by gravity. Go with disc.

8. Re-lubricate and be free. There is nothing that will slow down a snow biker faster than having their hubs freeze up, which is always a possibility when the mercury drops below zero. We have to lube up our moving parts with a special low-temperature grease, sold widely in cold regions like Fairbanks and Minnesota.

9. Stay away from moose tracks. Common injures for road cyclists include road rash and head injuries. Mountain bikers have problems with broken collar bones and bad knees. Alaska snow bikers are always being tripped up by the deep, narrow holes moose leave when they walk through the snow. Avoiding these minefields will help curb post-holing injuries like broken ankles.

10. Stay away from dogs. We talk a lot about fear of angry moose, grumpy bears and rabid wolves, but our most likely animal to have a dangerous encounter with remains the sled dog. They approach so quickly and quietly that we sometimes don't even have time to jump off the trail. A collision can be disastrous — imagine tangled lines, confused canines and a lot of sharp teeth. Add to that an annoyed musher who's likely packing heat, and you stir up the kind of fear that convinces snow-bikers to give those racing puppies a wide berth.