Accessibility links
Democratic Hopefuls Make Last Pitch to Iowans Democratic presidential candidates try to score some last-minute points during their final debate in Iowa, which goes to the polls on Jan. 3. Voters are looking for a change of direction.

Democratic presidential candidates try to score some last-minute points during their final debate in Iowa, which goes to the polls on Jan. 3. Voters are looking for a change of direction.

The Democratic presidential candidates are all insisting they are the ones who can change the nation's direction. And yesterday, Iowa voters got a look at six contenders. It's fair to guess that thousands of Iowans will still have a chance to meet candidates in person over the holidays. But this was the final debate before the Iowa caucuses start the presidential selection process early next month.

SCOTT HORSLEY: Democratic candidates tackled some fresh topics yesterday, but the overall message was one we've heard before. Voters are looking for a change in direction, and the candidates are competing over who's got the best roadmap.

Illinois Senator Barack Obama and former North Carolina Senator John Edwards both called for a sharp turn away from politics as usual in Washington. Here's Obama addressing a question about budget priorities.

Senator BARACK OBAMA (Democrat, Illinois; Presidential Candidate): What I want to do is get the long-term fundamentals right. That means that we are investing in education. We're investing infrastructure. We're getting our trade deals, structured so that they're fair. The fact is that we're not going to be able to do this unless we're able to overcome some of the special interests that have clogged up the system.

HORSLEY: Edwards and Obama are in a close three-way race in Iowa along with New York Senator Hillary Clinton. Clinton took a subtle jab yesterday at Edwards' brand of populism and Obama's rhetoric of hope.

HORSLEY: Yesterday's debate was the last time the Democrats would share the stage in Iowa before the caucuses. They discussed taxes, energy policy and trade. Iowa is a major exporting state, but many residents here are skeptical that free trade has been good for the economy. Edwards says increased trade with China is just another example of how corporate interests are leading U.S. policy astray.

Mr. EDWARDS: Big corporations made a lot of money - are continuing to make a lot of money in China. But what did America get in return? We got millions of dangerous Chinese toys. We lost millions of jobs. Right here in Iowa, the Maytag plant in Newton closed. A guy named Doug Bishop, who I got to know very well, had worked in that plant, and his family had worked in that plant, literally, for generations.

HORSLEY: Edwards has also criticized the North American Free Trade Agreement, which former President Bill Clinton signed into law. Hillary Clinton said yesterday that NAFTA should be modified, but she won't go as far as Edwards in attacking the free trade policies championed by her husband.

Sen. CLINTON: You know, you have winners and losers from trade right here in Iowa. People who are gaining because we're exporting and people, who John has rightly pointed out, have lost their jobs. We need to make a clear it to the rest of the world that we are an open society. We believe in trade. But we don't want to be the trade patsies of the world.

HORSLEY: Edwards and Obama typically present themselves as fresh alternatives to Clinton. But moderator Carolyn Washburn of the Des Moines Register pointed out Obama relies on many of the same foreign policy advisers who assisted former President Bill Clinton.

Ms. CAROLYN WASHBURN (Editor, Des Moines Register): With relatively little foreign policy experience of your own, how will you rely on so many Clinton advisers and still deliver the kind of break from the past that you're promising voters?

Sen. CLINTON: I want to hear that.

Sen. OBAMA: Well, Hillary, I'm looking forward to you advising me as well.

HORSLEY: That was one of the biggest applause lines of the afternoon. Another came from Connecticut Senator Chris Dodd, who was asked if he's running to restore his family's reputation after his senator father was censured in 1967 for misuse of campaign funds. On the contrary, Dodd said he is hoping to follow his father's example of public service.

Senator CHRIS DODD (Democrat, Connecticut): Lawyers only have so many clients. Doctors only have so many patients. But a well-intentioned public servant can make a difference in the lives of millions of people. That's my motivation. I want to carry that tradition on. That's why I'm running for president. 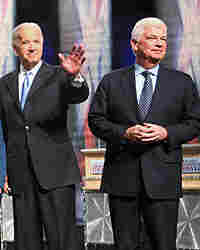 Democratic presidential hopefuls pledged Thursday to put the country on the road to a balanced budget by raising taxes for wealthy Americans and big corporations.

But they all agreed there is no quick fix when it comes to reducing the country's $127 billion deficit.

"You can't do it in a year. It'll take time, but the economy will grow again when we start acting fiscally responsible," said Sen. Hillary Rodham Clinton, who took the stage with five of her Democratic rivals for the final debate before Iowa's caucuses on Jan. 3.

Clinton said she would cut costs and implement programs to make the government run more efficiently, harkening back to the 1990s when her husband, former President Bill Clinton, left the Bush administration a budget surplus.

"We don't have to go back very far in our history — in fact, just to the 1990s — to see what happens when we do have a fiscally responsible budget that does use rules of discipline to make sure that we're not cutting taxes or spending more than we can afford," Clinton said. "I will institute those very same approaches."

Clinton and her rivals also called for higher taxes on the country's wealthiest citizens and big corporations to help put the country back on sound financial footing.

"The truth of the matter is the tax policy has been established by the big corporations and the wealthiest Americans," said former Sen. John Edwards of North Carolina. "What we ought to be doing instead is getting rid of those tax breaks."

The candidates also acknowledged the need to cut government waste and make changes in programs, including Medicare, but Illinois Sen. Barack Obama said it will take a new kind of politician to actually make that happen.

"We are not going to make some of these changes unless we change how business is done in Washington," Obama said. "The reason that we can't negotiate for prescription drugs under the Medicare prescription drug plan is because the drug companies specifically sought and obtained a provision in that bill that prevented us from doing it."

Both Obama and Edwards have criticized Clinton for being too accommodating of corporate interests on matters including health care — and the need for a change is a common theme of Obama's campaign.

The Democrats answered questions on the same stage that Republican White House hopefuls held on Wednesday, during the second half of a debate double-header sponsored by The Des Moines Register.

Polls show Obama, Clinton and Edwards in a tight race.

But the debate also provided a forum for some of the lesser-known candidates in the race.

New Mexico Gov. Bill Richardson talked up his energy plan, which is more aggressive than most of the other Democrats' plans.

"I think fuel-efficiency standards in this country should be 50 miles per gallon, not 35. I think that's pathetic," he said.

The candidates were also asked about education. Biden said he favors starting children to school earlier and putting them in smaller classes. He also said every child should have an opportunity to attend college.

Rep. Dennis Kucinich of Ohio was excluded from the debate by the debate's sponsor because he does not have a campaign office in Iowa.