Accessibility links
Two Films Unveil a Lost Jazz Legend Not one note of recorded sound exists to document Buddy Bolden's genre-defining music. Still, rock musician Dan Pritzker is making not one, but two movies about him. The nearly mythic "King of Jazz" influenced Louis Armstrong, a key character in both films.

The only known photograph of Buddy Bolden (pictured far right) with his band, circa 1900. hide caption 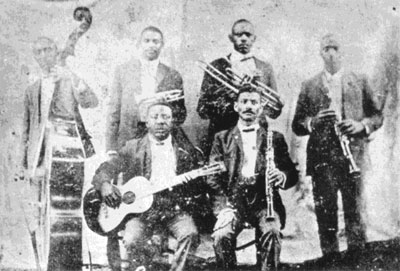 The only known photograph of Buddy Bolden (pictured far right) with his band, circa 1900. 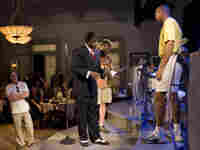 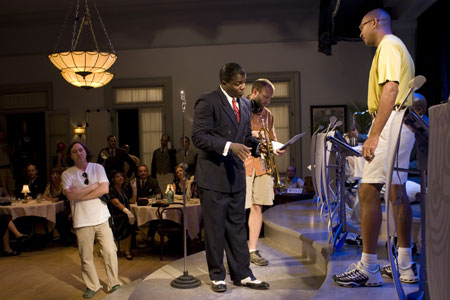 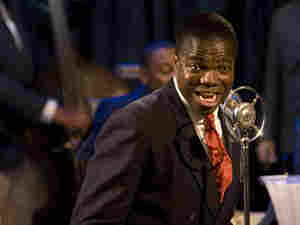 At the turn of the 20th century, late at night after polite crowds had left the dance halls of New Orleans, a young bandleader named Buddy Bolden would lift his cornet and let it rip for the dancers who came in after hours. This is the sound that would become jazz.

Despite the fact that not one note of recorded sound exists to document Bolden's genre-defining work, rock musician Dan Pritzker is making not one but two movies about him.

New Orleans trombonist Delfeayo Marsalis is the musical adviser on both films. He says it was Bolden's take on a tune that made him a beacon to other musicians.

There is an element of mystery, because nobody alive today really knows what Bolden sounded like. Legend has it he made a few records, which have since disappeared. And his biography, In Search of Buddy Bolden: First Man of Jazz by Don Marquis, is little more than a sketch of a man who brought an edge to the music.

"He had a reputation for playing loud and he was playing something different than what the other bands were," Marquis says. "I don't know what you would call it; he was ragging the music. He was not playing strictly by notes — they weren't reading the music."

Marsalis agrees, but also imagines Bolden as the consummate entertainer.

"He has become this legendary jazz figure, but in realistic terms, I think he was the first great pop musician, and he knew how to please and get the women all worked up and just play what everybody wanted to hear."

By most accounts, a mix of alcohol and mental illness sent Bolden into an asylum in 1907; he stayed there until his death in 1931. Over the years, gaps in his biography were filled with the myths that eventually crowned Bolden "King of Jazz." His sound influenced Louis Armstrong, his life inspired a novel — Coming Through Slaughter by Pulitzer Prize-winning author Michael Ondaatje — and now the Bolden mystique has lured Pritzker into trying to tell his story on film.

On tour with his rock band, Sonia Dada, Pritzker was playing a gig to ring in 1995 when between sets he learned about Bolden from a radio programmer.

Bolden didn't really invent jazz, but Pritzker spent much of the last decade learning what he could about him. He was driven by the mythology and drama of Bolden's life, and decided — without any prior experience — to make two movies. Bolden! is a full-length feature and The Great Observer is a black-and-white, silent short film intended to be screened with a new composition by Wynton Marsalis.

Pritzker is bankrolling the films with money he inherited from his father, Jay Pritzker, co-creator of the Hyatt hotel chain. This allowed him to hire veteran filmmakers, including cinematographer Vilmos Zsigmond, who shot The Deer Hunter and The Black Dahlia.

Pritzker says that his years touring with Sonia Dada didn't prepare him for directing. Compared with being in the band — where he's collaborating with fewer than a dozen people — calling the shots on a movie set is an entirely different experience. He likens it to painting a picture 100 yards away with 40 people holding your paint brush.

Much of the filming on both films is done. Pritzker is now editing them, and hopes by this time next year that he can introduce a wider audience to a man he calls a shaman — and a legend who turned the lights on for everyone, then left the room unnoticed.