Accessibility links
Who Is Singing Me Lullabies? : Krulwich Wonders... One night, an elderly woman woke up to a female voice singing Irish ballads. The problem was the voice was in her head. Dr. Oliver Sacks was able to determine why she heard the voice. But the more interesting question was -- whose voice was it?

Listen
Who Is Singing Me Lullabies? 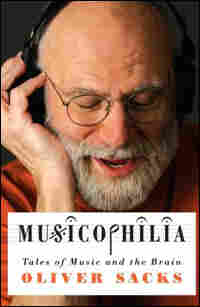 Dr. Oliver Sacks called her "Mrs. O'C;" She was Irish. She was old (in her 80s). And she had a problem: One night, back in the 1970s while sleeping in her room at the Catholic old people's home in the Bronx, she was awakened by a voice, a female voice singing Irish ballads.

The music was so loud that Mrs. O'C couldn't understand why the other women in her home weren't awakened. She got out of bed, determined to turn off the radio or the record or whatever it was that was "on" in the middle of the night. But nothing was "on." She realized, with some alarm, that the voice was in her head.

She saw the house doctor, then a psychologist, and then the home's neurologist, who happened to be Dr. Sacks.

Mrs. O'C had two questions: "Why is this happening?" (She presumed she was going crazy.) And, "Who is that in my head?" The voice seemed vaguely familiar.

Who Could It Be?

Dr. Sacks was able to reassure Mrs. OC that she was not having a mental breakdown. He explains in our broadcast that he could see from tests that she had either suffered a stroke or maybe had a tumor pressing a region of her brain associated with music. The pressure had triggered, he thought, a kind of musical epilepsy, the sudden production of music in her brain.

But the second question, "Who is that singing?" was tougher to solve.

Mrs. O'C told Dr. Sacks that the tunes in her head were all Irish, all sung by the same female and sounded vaguely like ballads or lullabies.

Dr. Sacks also asked her about her childhood and learned that her father had died before she was born. Her mother died, too, when she was only 5.

"Her childhood was sort of desolate," he says. "Orphaned, alone, she had been sent away (from Ireland) to America to live with a rather forbidding maiden aunt. She had no conscious memory of the first five years of her life. No memory of her mother, of Ireland, of home."

Mrs. O'C confessed to Dr. Sacks that she had lost all conscious memory of her mother. "She had always felt this as a keen and painful sadness," he says.

But when someone hears music, unbidden, in ones head, scientists can't say where that music comes from. It might be a specific memory from long ago, a repressed memory perhaps, or maybe just a sound that slipped into the brain a while ago, an ad jingle, a pop tune, a Christmas carol, a hymn. We just don't know.

"I am something of a romantic at heart," Dr. Sacks said, so he offered Mrs. O'C an explanation about the songs in her head that made her feel dramatically different about her illness.

I Can't Say This for Sure, But…

He suggested that maybe, at the age of 88, she was getting the rare, rare opportunity to hear the actual voice of her mother singing her lullabies. He gave Mrs. O'C a short story by the great H.G Wells that described a man who could magically open the door to his pre-conscious, infant past and hear what is denied to the rest of us: the sounds of earliest childhood. Perhaps (and this is a big perhaps), Mrs. O'C's disease had opened that door in her, and the voice she was hearing belonged to her mother.

I could tell you what happened next, how Mrs. O'C reacted, but I'd much rather you hear it from Dr. Sacks himself, who admits that "I sometimes depart from strict neurology" for the sake of the patient's wellbeing. And Oliver Sacks telling a story is one of life's keen pleasures.

Just push the button on the upper left side of this page and treat yourself.

The story of Mrs. O'C was first told in Dr. Sacks book, The Man Who Mistook His Wife for a Hat, but what Dr. Sacks' told Mrs. O'C then, he says he probably wouldn't tell her now. He updated the story in his newest book, Musicophilia.

I chose two ballads to imagine the voices inside Mrs. O'C's head. They are my choices, my own acts of imagination. Mrs. O'C died many years ago and there is no way to know precisely what she heard. My choices were "Shule Aroon," a traditional Irish folk tune and "Down By the Sally Gardens," from a poem by W.B. Yeats.

The voice you hear belongs to Anne Bobby, who very kindly agreed to help us out. Anne is an actress whom you may have seen as the distraught wife of a murder victim on Law and Order. She's feeling better now and so she's appearing in a New York City production of I Love You, You're Perfect, Now Change. We made the recording at NPR studios in New York City.