Accessibility links
Huckabee Talks Tough on Mortgage Bailout Earlier in the year, former Arkansas Gov. Mike Huckabee was near the back of the pack among Republican presidential contenders. Now, he's running second nationally. Huckabee outlines his positions on Iran, the mortgage crisis and his religious beliefs. 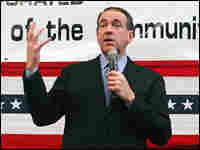 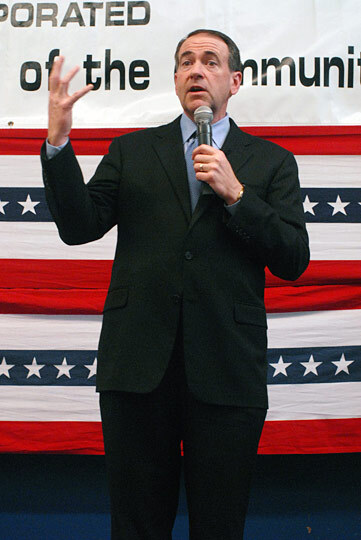 Earlier in the year, former Arkansas Gov. Mike Huckabee was near the back of the pack in the race for the Republican presidential nomination.

Now, he is leading the polls in Iowa and South Carolina — and running second, but gaining on, Rudolph Giuliani nationally.

Huckabee talks with Robert Siegel about Iran, the mortgage crisis and the current scrutiny of his religious beliefs.

There are umpteen columns and papers and briefings about Iran now. Where does it all leave you, in terms of the need to be preparing right now for military action against Iran?

All options have to be on the table. But before we bomb them, we ought to bankrupt them. There are a number of ways that we ought to attempt to resolve this short of military action, but you just don't tell what you're going to do or what you're never going to do. That would be a foolish mistake on the part of the United States government. But what you do is make it very clear that weaponized nuclear devices on the part of Iran is unacceptable.

In an interview on Fox News recently, you said that the government should not be bailing out people whose mortgages are about to reset to interest rates that they can't afford. Foreclosures are at record rates right now. Wouldn't doing nothing — as millions of Americans risk losing their homes — smack of Herbert Hoover deferring to the market as 25 percent of Americans were unemployed in the Depression?

Not at all. What you have is a situation where you have culpability on the part of the lenders and the borrowers. The fact is you need to encourage the lenders to try to work with those who have borrowed to keep from foreclosure because ultimately nobody wins. The banks don't need an enormous inventory of property on their hands that they can't move any more than the market can. The lender doesn't need to be in default and ultimately bankruptcy and out of a home.

But what we don't need is a government bailout. That is not the purpose of government, to prop people up from every poor decision they make. In fact, when you do that ... whether it's in the world of finance or the world of drug addiction ... it creates an enabling codependency. It's the last thing that really helps people.

Is there some way to bring some resolve to it? Yes. But it needs to be handled by the ... people who made the mistake in the first place: overambitious borrowers and greedy lenders, who saw a way to suck people into interest rates that they should have known they couldn't afford in the long term.

But apart from assigning an ethical or moral responsibility to the players in this problem, where does the government step in? What's the role of the federal government, and if you were president and this crisis were deepening, what would be the role of the Huckabee administration in approaching it?

I think you would do similar to what the Bush administration has done. You wouldn't bail people out with other people's taxpayer money. You would ask those parties to sit down and find out is there a way they can resolve it. And the reality is, in some cases, yes, they can work it out. In some cases, they cannot. And there are consequences for people's actions. If I drive 95 miles an hour and drive on icy roads, there are consequences. And there are a lot of consequences that the government can't fix. And a government that can do everything for you is a government that can take everything from you. We don't want that kind of government.

But there's a different degree of danger in somebody who takes the risk of driving 95 miles an hour on icy roads and somebody who notices that real estate prices are going up all around them and buys a house one size too big. To your mind, moral hazard is still at work — you don't want to encourage that kind of decision?

Well, the question still comes: If you're a taxpayer, and you've responsibly made financial decisions, should you be made to involuntarily pay your house payment and that of your neighbor, who bought more house than he could afford, even though you acted prudently?

I will go on to another subject, which comes in the New York Times profile that's going to be published on Sunday. In that, you made a remark that you've been asked about a great deal — and you've already apologized for it — about the Mormon faith. You asked, isn't it true that Mormons believe that the devil was Jesus' brother, or something like that. I gather that you apologized to [Massachusetts] Gov. Mitt Romney [who is a Mormon] for it. It raises a question for many people: Are you ready for primetime? Are you ready for the scrutiny of everything that you say, every remark that you make or have made, that will now be subject to the microscope of national political coverage?

Well, I think the answer is yes. I've been under that microscope for quite some time, and it's certainly intensifying. All the sharp knives in the kitchen have been brought out of the drawers now that we're leading in polls all over the country. The interesting thing is that there seems to be a great deal more attention on ... really, an intense scrutiny on the details of my faith, than there is on anybody else's, including Mitt Romney's. Every day there is some new nuance about the Baptist faith, some statement I made 15, 20, 25 years ago that gets a lot of attention.

And I'm not sure why that there is almost an unbalance — and I don't have a whole lot of people lining up to tell me that they're not going to ask those questions anymore. Tried to be honest with them, answer them all I can, but in running for the presidency, people are looking for what I would do about energy and education and health care, building the infrastructure of this country, becoming energy independent, making this country safe and securing its borders. I honestly don't have a whole lot of people out in the town hall asking me about the details about Baptist doctrine.

Do you feel you're getting an unfair shake here about being a Baptist minister, and that people are going after your beliefs more than is appropriate in a presidential campaign?

For people to dig back 20 years and say "Oh, you know what, you said something in a church somewhere" — I'm not running to be the pastor of America, I'm running to be the president. And if people want a president who can lead them in a positive and optimistic and resilient way, they can look at the record that I have and also look at the plans that I do have for the future and frankly, that's why there is an incredible upsurge all over this country.

It's no longer a matter of people [saying], "His support is coming only from the evangelicals." You don't have that kind of support just from evangelicals and end up No. 1 in Michigan and in Delaware and in states where the evangelical voting base is not that significant. "

Are those people giving you money? Are you actually raising some money for this campaign?

Absolutely. We raised more in November than we raised in all the 10 months previous put together, so clearly, things are on the upswing for us.