Accessibility links
Timeline: Blackwater and Security Regulations The Defense Authorization Bill, with a provision to tighten regulations on security contractors abroad, has reached President Bush's desk. Bush's decision on whether to sign the bill will affect companies like Blackwater Worldwide. 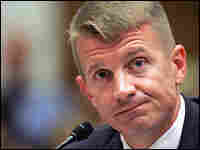 The Defense Authorization Bill passed by Congress contains provisions that tighten government oversight of private security contractors working in Iraq and Afghanistan. It would require clear rules of engagement for private guards, and it would establish minimum standards for hiring and training guards. The contractors would also have to comply with military regulations and orders issued by commanders in a war zone.

The drive to pass the legislation was prompted by a series of violent incidents involving private security companies in Iraq, including one of the largest, Blackwater Worldwide. Here's a timeline of events in Blackwater's rise and some of the incidents that triggered calls for tighter regulation:

December 1996: Blackwater is founded by Erik Prince, heir to a fortune earned by his father in the auto-parts business. Over the next few years, the company builds its customer base by providing training in firearms, personal security and counterterrorism.

March 2004: Iraqi insurgents kill four Blackwater contractors in Fallujah, Iraq. Their bodies are set afire and dragged through the streets before being hanged from a bridge over the Euphrates River. The incident was one of the factors leading to the first Battle of Fallujah in April, in which the American military tried unsuccessfully to capture the city.

January 2005: Families of the four contractors killed in Fallujah file a wrongful death suit against Blackwater, claiming the company failed to provide the force protection it had promised to its client. Blackwater counter-sued, saying the Blackwater employees had signed away their right to take legal action against the company.

June 2005: Blackwater guards shoot and kill an Iraqi man in Hilla, south of Baghdad. The guards fail to report the incident, which a U.S. State Department memo describes as "the random death of an innocent Iraqi citizen."

September 2006: A Blackwater security convoy traveling on the wrong side of the road collides with a civilian vehicle. Blackwater personnel reported that they couldn't rescue the civilian driver, because his car burst into flames.

December 2006: A Blackwater guard is accused of killing one of the security guards of Iraq's vice president in the Green Zone. Blackwater fires the man for "violating alcohol and firearm policy," but he is not prosecuted.

February 2007: The House Committee on Oversight and Government Reform holds hearings on the use of private contractors in Iraq, including testimony from Blackwater and the families of the Blackwater employees killed in Fallujah.

September 2007: Blackwater guards on a State Department convoy open fire in Nisoor Square in Baghdad, killing 17 Iraqis and wounding about two dozen others. An FBI investigation finds that at least 14 of the shootings were not justified.

October 2007: Blackwater founder Erik Prince testifies before a House panel, saying his company has few remedies for dealing with employees accused of crimes.

December 2007: Blackwater says it will go ahead with plans to build a training facility in Southern California, about 45 miles east of San Diego. The announcement comes just a day after voters in the nearby town of Potrero voted to recall five planning board members who had approved the project. The issue is now in the hands of the San Diego County Board of Supervisors, which is waiting for the results of environmental impact studies.

The Defense Authorization Bill, including a provision to create a Commission on Wartime Contracting, is passed by the House, then the Senate — and is sent to President George Bush.