Accessibility links
Contentious Climate Talks Yield 'Bali Roadmap' After marathon talks in Bali, Indonesia, the U.N. climate conference agreed Saturday on a roadmap for negotiations for a new treaty to combat global warming. The conference nearly broke down, but in a last-minute compromise, the U.S. signed the pact.

After marathon talks in Bali, Indonesia, the U.N. climate conference agreed Saturday on a roadmap for negotiations for a new treaty to combat global warming. The deal sets an agenda for negotiators working to find ways to reduce pollution and help poor countries adapt to environmental changes.

The conference nearly broke down, but the U.S. dropped its last-minute demands and signed the new pact after an outpouring of outrage and disappointment from other delegations. Nations now have two years to craft a legally binding treaty. 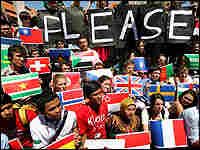 Environmental activists and supporters shout slogans during a demonstration at the venue of the U.N. Climate Change Conference 2007 in Nusa Dua on Bali. Jewel Samad/AFP/Getty Images hide caption

A new climate deal finally came to life today in Bali and in an extraordinarily dramatic fashion. The talks were supposed to end Friday, but spilled deep into Saturday. First, it seemed India would poison the deal, then it seemed the United States was going to kill it.

But the United States changed paths, and the result is a document called the Bali Roadmap, which includes measures for preserving tropical rainforests and helping poor countries adapt to a green economy. It is supposed to guide the world to a new climate treaty over the next two years, taking up where the Kyoto treaty leaves off.

It took more than 10 days to get close to agreement in Bali. Schisms, as usual, appeared between the United States and a more aggressively green Europe. And just as those divisions were patched up, a bigger problem arose between the developed and the developing world.

A long simmering issue is how strongly developing countries such as China would be compelled at some point to limit their emissions, too.

Final sessions at these meetings usually seal done-deals, but it was not so in this case. The deal seemed so fragile, United Nations Secretary-General Ban Ki-moon flew in from East Timor to plea for a climate agreement.

Indonesia President Susilo Bambang Yudhoyono came, too, and exhorted the negotiators on to success. But in the final session, India proposed some new language that would ease somewhat the obligations of the developing world. United States representative Paula Dobriansky asked to speak. She said the United States would stick by its long-held position that developing countries ultimately have to limit their emissions, too.

"We would like to find a way a forward here, we are not prepared to accept this formulation at this time," Dobrianksy said.

The vast meeting room erupted with boos. By this time, the meeting had already run on 20 hours longer than it was supposed to, and the prospect of yet another delay seemed quite likely fatal to the talks.

And there was much in this agreement that everyone wanted. For example, the document includes financial incentives for developing nations to not to chop down their tropical forests, and significant new aid for poor countries most vulnerable to climate change.

Quickly, delegations sided with the developing world. Kevin Conrad, representing Papua New Guinea, turned to the United States representative as he lit in.

"We ask for your leadership," Conrad said. "We seek your leadership. But if for some reason you're not willing to lead. Leave it to the rest of us. Please get out of the way."

America's strong allies also piled on, including South Africa's representative, who said U.S. representative Dobriansky's statement was "most unwelcome and without any basis."

Speech after speech made it clear the United States was isolated on this. If they stuck by their position, the talks would fail and the U.S. would bear the blame. So all eyes turned to Dobriansky, when she raised her sign and asked to speak again:

"I especially want to assure my dear friend to South Africa that I think that we have come a long way here, and in fact the United States is very committed to this effort, and just wants to really insure that we all will act today. So, Mr. Chairman, let me say to you that we will go forward and join consensus in this today."

Why the United States nearly killed the treaty, then pulled back at the last moment is surely a story of intrigue in itself. Whatever happened, there was a huge sigh of relief in the room. And with no other objections, the conference president asked for consensus, as is required for United Nations negotiations. Nobody objected. His gavel came down and the deal was done.

The roadmap will chart a path forward for a new climate treaty. The details of that get negotiated in more meetings like this, between now and 2009.