Accessibility links
Revisiting the Little Rock Chili Incident In 1958, a black girl at Little Rock's Central High School spilled some of her lunch on a white boy, nearly causing a riot and changing both of their lives forever. Exactly 50 years later, we look back on this key moment in civil rights history. 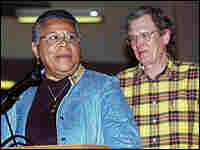 Two years ago Minnijean Brown (left) and Dent Gitchel (right) were reunited for the first time since the incident in the same place where it took place. Richelle Antipolo/Flickr hide caption

The incident occurred at a critical moment in civil rights history. Just a few months earlier, in September 1957, nine black students attempted to attend the previously all-white Central High. The governor brought in the National Guard to keep them out, but the president trumped the move, bringing in the Army to facilitate their admission. For weeks, angry mobs taunted the black students as they came and went, keeping the story in the headlines.

By December, the crowds and reporters were gone, but the harassment by the white kids grew, recalls Minnijean Brown Trickey, who was one of the nine black children attending Central High. Catcalls and worse were a part of daily life as she made her way down the halls.

"We were always getting hit and kicked," she remembers. "Some of the boys wore these toe plates and heel plates so they could kick pretty hard."

On Dec. 17, 1957, things came to a head. Trickey was inching her way between the tables in the lunchroom.

"I was holding the tray above their heads, trying to get through the aisle," she recalls.

Meanwhile, junior Dent Gitchel was trying to eat his lunch.

"There were some guys harassing her along the aisle," he says. "Some people would refuse to move their chairs, and I think somebody kicked a chair at her."

"Pandemonium broke loose in the cafeteria at that moment," he recalls.

Both students were ordered to the principal's office.

"When I got to the office, the girls' vice principal asked me if I had done it on purpose," Trickey recalls. "And I said, 'Accidentally on purpose.' That's because I really hadn't understood it."

The school sent Gitchel home to change his clothes. He was back in school that afternoon. Trickey was suspended for six days. Two months later, she was gone; she would finish high school in New York.

Gitchel went on to become a lawyer and law professor in Arkansas.

"In many ways, it was a positive thing because it opened up my mind," he says. "It started the process of changing my attitudes on a whole lot of things."

Trickey says the chili incident in the lunchroom taught her this lesson: She could not be perfect, even if it meant letting down the people who needed her as a civil rights symbol, and further upsetting the racists who taunted her every day.

"You have to be perfect to come to our imperfect school," she says they seemed to be telling her. "That is the nature of racism .... We'll do everything we can to make sure that you can't measure up, for as long as this country exists. And we'll do that so well, you'll think it's your own fault."

Trickey went on to become a teacher, social worker, activist and a mother. She and Gitchel didn't see each other again for decades, until they met and got reacquainted two years ago — at a Little Rock chili cook-off.