Accessibility links
Witness Testimony Sheds Light on Blackwater The Justice Department is considering whether to bring criminal charges against Blackwater employees for a shooting that left 17 Iraqis dead. NPR FBI correspondent Dina Temple-Raston shares the stories of three witnesses — a traffic officer, a bank employee and a doctor who lost his wife and daughter in the shooting.

The Justice Department is considering whether to bring criminal charges against Blackwater employees for their role in a shooting incident that left 17 Iraqis dead. Madeleine Brand talks to NPR FBI correspondent Dina Temple-Raston, who shares the stories of three witnesses — a traffic officer, a bank employee and a doctor who lost his wife and daughter in the shooting. 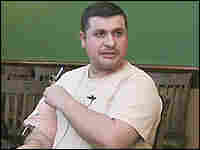 Abdul Wahhab, a computer technician at the Trade Bank of Iraq, was driving near Mansoor Square on Sept. 16, when he was shot in the arm, allegedly by Blackwater security guards. Courtesy Susan Burke hide caption

Watch Abdul Wahhab, who was wounded during the Sept. 16, 2007, shooting incident at Mansoor Square in Baghdad. 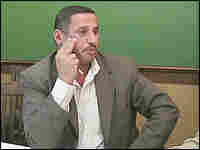 Ali Kahlaf Salman is a traffic officer who was working in Mansoor Square in Baghdad on the day of the Blackwater shooting. Courtesy Susan Burke hide caption

Watch Ali Kahlaf Salman, the chief traffic officer at Mansoor Square since 2004. He was there during Blackwater's Sept. 16, 2007, shooting incident.

Read a chronicle of events in Blackwater's rise and some of the incidents that triggered calls for tighter U.S. government regulation on private security contractors.

By now, most Americans are familiar with Blackwater USA's controversial shooting in Baghdad last September. Seventeen Iraqis died in the shooting. The FBI is investigating. A grand jury is deciding whether to bring charges against the Blackwater employees. What follows are the more seldom heard voices — those of the Iraqi people who were there that day or lost loved ones there. Quite by accident, they find themselves in the middle of an international controversy.

Ali Kahlaf Salman has been the officer in charge of keeping traffic moving at Mansoor Square in Western Baghdad since 2004. That day, he says, he wore the white button-down shirt, blue pants and hat that all the traffic officers wore, and he carried a gun. Even out of uniform, Salman looks like a cop. He has short brush-cut hair, broad square shoulders and big square hands.

On Sept. 16, he knew a security convoy was heading for his traffic circle because the parade of armored vehicles was always announced by the same thing: the thumping blades of helicopters. The security companies send the choppers ahead to ensure that the roads are clear. Salman had found that the easiest way to deal with the phalanx of trucks was simply to clear a path for them, to stop civilian traffic and let the security cars rumble through. So he had started to do just that when the four Blackwater SUVs entered the square and stopped in a semicircle. As soon as they arrived, the Blackwater employees started throwing water bottles at the cars and pedestrians around them to make sure people kept their distance. Their guns were out. Almost immediately, according to Salman's version of events, a Blackwater guard opened fire.

"The man in the third car started firing his gun, and he fired three or four shots randomly," Salman told American lawyers who provided a videotape of his account to NPR. Through an interpreter, he provided a description of the first shooter: "He was big, had a mustache and was white."

When the shots first rang out, Salman thought the security contractors were firing over the traffic. But when he turned toward the line of civilian cars in front of him, he realized he was mistaken. From a small white sedan in the square, he could hear a woman beginning to wail, "My son, my son ..."

Salman started moving in the direction of the cries. The woman inside the white sedan was rocking a young man in her arms, wailing his name. He was covered in blood.

"I tried to help him out of the car," Salman said, "but the mother inside was holding her son too tightly. She wouldn't let go."

Salman started waving at the Blackwater guards, trying to signal that they ought to stop shooting, that the car wasn't a threat, that someone was hurt.

"He was telling them, 'Don't shoot, please,'" the interpreter said. "He raised his hand, trying to tell them a young man was dying, but this time the man in the fourth car shot the mother dead."

Salman sprung back, worried that he would get hit, too. It took him a moment to realize that the Blackwater guards were still shooting. He took cover behind the traffic officer's booth. He said bullets rained in his direction. They ricocheted off a traffic light above him and off the open door of the booth.

In the nearby white sedan, the young man he had tried to pull from the car was slumped over the wheel. His mother lay motionless. The car kept creeping forward. Blackwater opened fire on the car, Salman said, mimicking the sound of the guns as he described what happened.

"Boom, boom, boom," he said. "The car had started moving very slowly by itself because it was an automatic car. It was moving toward the square, and at this moment they started shooting the car with big machine guns. And then the car exploded."

Abdul Wahhab is 36 years old and has the beefy build of a linebacker. A computer technician at the Trade Bank of Iraq, he happened to be in the square that day. He had left the office just before lunch to buy a present for a friend's new baby. Traffic was clogged at Mansoor Square. He got out of his car to look at what the problem was, he said, when he saw a white car burning just 300 feet away. Two small helicopters were flying low, blades whooping overhead. He could see men filling the open side doors of the choppers. They were shooting into the square. He could see the flashes coming from the muzzles of their guns and hear the sound of gunfire. That's all Wahhab needed to see. He turned his car around and started trying to weave through the traffic to get away.

"I used my car horn and was shouting to the people, 'Go, go, go ... move, move,' and suddenly I use the middle mirror inside the car, and I saw the armored cars behind me," he said.

In his rearview mirror, Wahhab watched the SUVs closing in, swallowing the distance between them. He couldn't move; he was stuck behind three other cars. He leaned on his horn. He heard loud thumps on his back windshield. His heart started to race. The Blackwater contractors were throwing water bottles at his car. Then it got worse.

"So suddenly there is something stop my car. When I turn around, I saw a big car hit my car from the right side, and the window of the front door, it's broken," he said. "I feel my hands (arm) get broken, I know that they are shot me. So I open the door and drop myself in the street because I thought that they wants to kill me."

Three months after the incident, Wahhab is still healing. He has pins in his arm where the bullet shattered his bone. A big metal frame holds the pins in place. He isn't emotional when he talks about the shooting; he is very matter-of-fact. He is suing Blackwater in the U.S. courts for a wrongful shooting.

Not far from the square, on Yarmuk or Hospital street, Dr. Jawad was waiting for his eldest son, Ahmed — a medical student — and his wife, Mahasin. They were supposed to pick him up from work. They never arrived. They were the two people in the white sedan — the two people officer Salman tried to save that day in the square. Dr. Jawad is inconsolable.

"I would never let her drive a car alone," he says in barely a whisper. "So there was always a man in the car. My son, for example, was with her in the car because the situation in Iraq was insecure. Unfortunately, my son being with my wife was a precaution against the situation but ... I think my plan failed that day."

Jawad filed a wrongful death suit in the U.S. courts against Blackwater earlier this month.

Susan Burke is the Philadelphia lawyer representing him and five other families of Iraqis who either died or were wounded in the shooting that day. She provided NPR with the videotapes and audio recordings of her clients. She flew to Istanbul to interview them for the case earlier this month.

"Obviously, from the families' point of view, we can't make things right and bring back loved ones," she said when she returned. "But we can give them a nonviolent, constructive outlet, and the civil action gives them a place to try to do what they can to try to hold the company accountable for killing their loved ones."

NPR called Blackwater for comment on this story and the Iraqis' version of events. Spokeswoman Anne Tyrrell said Blackwater was cooperating with the FBI and "did not want to compromise that investigation."

She provided Blackwater CEO Erik Prince's prepared Congressional testimony from Oct. 2. It is not the version Prince delivered. When he testified, he declined to talk about that day, saying an investigation was under way.

In the prepared testimony, Prince laid out Blackwater's version of events. The statement said the convoy was "receiving fire" when it entered the square, men with AK-47s were threatening the convoy, and some of the people firing on them were wearing Iraqi National Police Uniforms. The statement said the cars tried to leave, but one of the cars was disabled by enemy fire. It said five Blackwater employees discharged their weapons and that the Blackwater guards in the helicopters never fired their guns.

That version of events flies in the face of what the witnesses say they saw. Investigators for both the FBI and the Iraqi government have not been able to substantiate claims that the convoy was taking fire. Salman said he and one other man were the only officers in the square. And Salman didn't draw his gun; he laughed when asked if he had.

"These guys killed 40 unarmed people. If I had drawn my gun, what do you think would have happened to me?"

Prince spoke to NPR in October and was asked in that interview about the perception that his company's employees had no regard for Iraqi lives.

"No, that is absolutely not the case," he said. "The idea that the guys don't have high regard for the Iraqis is just not correct."

The more immediate concern is that Blackwater's actions in Iraq don't just reflect on the security company. It has become a broader American problem because Iraqis — like Dr. Jawad — don't distinguish between the Blackwater employees and the American military more generally.

"Did you learn who did this later?" one of the lawyers asked Dr. Jawad on the tape.

"You mean, like, security company?" Jawad asked wearily. "What difference this makes? They are Americans."

The State Department offered Jawad $10,000 in compensation if he agreed not to sue. He refused. The Justice Department has convened a grand jury in Washington, D.C., to look at the case. Sources say they are focused on the actions of just three or four Blackwater guards. While the grand jury sorts through the evidence, Justice Department lawyers are trying to decide what charges to level against them.