Accessibility links
The White Stripes: Collaboration, 'Conquest' In recording material for its new series of singles, the hard-rock duo worked with Beck, a mariachi band and a cover of a 1952 Patti Page song. Renee Montagne speaks with White Stripes frontman Jack White.

More from the White Stripes

More from Renee Montagne's interview: Jack White talks about how the White Stripes came up with their peppermint candy color scheme, and about playing Elvis in the new movie Walk Hard: The Dewey Cox Story.

Watch a music video for The White Stripes' new single: 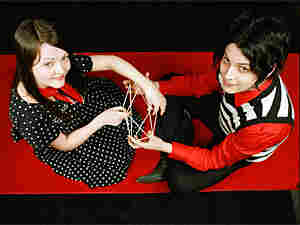 For the B-sides of the duo's new series of singles, The White Stripes cut three new tunes: "It's My Fault for Being Famous," "Honey, We Can't Afford to Look This Cheap" and "Cash Grab Complications on the Matter." Autumn de Wilde hide caption

One of America's biggest rock bands, The White Stripes, is also one of its smallest.

The duo of guitarist Jack White and drummer Meg White draws from blues and punk in equal measure, but its latest release is inspired by a pop song from the '50s.

Patti Page is best-known for her hit "How Much Is That Doggy in the Window." Her more sultry "Conquest" is a song Jack White wanted to sing for years.

"Conquest" is the A-side on three new vinyl singles from The White Stripes. The B-sides are new songs.

"Well, the problem with B-sides is, it's almost like, 'Okay, we'll go and write some mediocre songs,'" Jack White says. "I really love B-sides, because it gives you a new chance to breathe some new life into a whole project that you were already working on. It's almost like the stepchildren of the project of the album."

Earlier this year, the band released its sixth studio album, Icky Thump. For the new B-sides, The White Stripes teamed up with Beck and recorded in his Los Angeles home studio.

The new songs include an acoustic, mariachi-style reworking of "Conquest." Being in Southern California, Beck pointed out a place where they could find mariachi ensembles standing around waiting for work.

"While we were working on a song, we asked if somebody could go over there and check and see if there was anybody there," White says. "She called back and said, 'Do you want a four-piece or a five-piece band?'"

Jack White spoke with Renee Montagne about working with Beck, as well as the new songs and the inspiration for The White Stripes' sound.

"One thing we've always tried to avoid in The White Stripes is all those words that I can't stand that start with 'R,' such as retro, and relic, and reissue, and re-create, all that stuff," White says. "All I know is I just want my stuff to sound as soulful as I can." 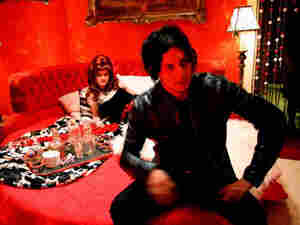 Currently on tour to promote their latest album, Get Behind Me Satan, The White Stripes are from Detroit with a minimalist sound built on basic drums (Meg White) and guitar (Jack White). The band's inspired mix of classic rock, blues and punk is stripped bare but intense. It's been a wildly successful formula, earning a legion of fans worldwide and nearly universal praise from critics.

M. Ward writes quiet, introspective folk and sings with a wisp of a voice. His music is often processed to give it a distant, creaky feel, as though it were coming from an old radio in another time. His latest CD is, in fact, called Transistor Radio, a delicate tribute to a forgotten era.