Accessibility links
In a Forest's Breath, Deciphering Climate Clues The world's forests currently soak up 25 percent of the carbon dioxide created by burning fossil fuels. But as forests age, they may start releasing more CO2 than they absorb. Scientists have put Harvard Forest under the microscope to find out which way trees will sway. 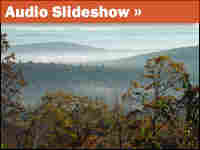 Tales of a New England Forest

We know where [the carbon] is going, but we don't know why. We're trying to unravel that. It's one of the big questions in climate change science. 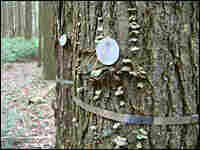 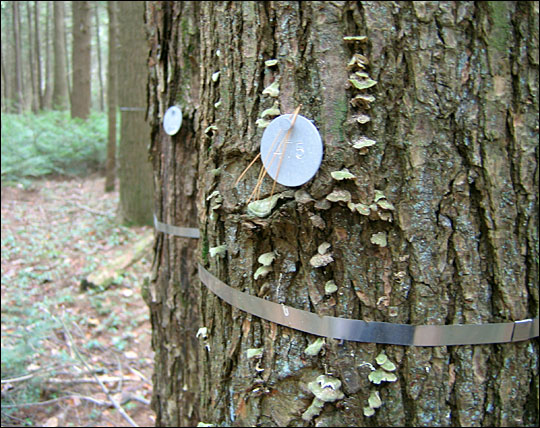 Trees in Harvard Forest carry identification tags and bands to measure their growth. 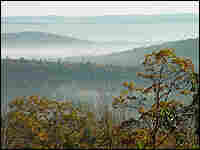 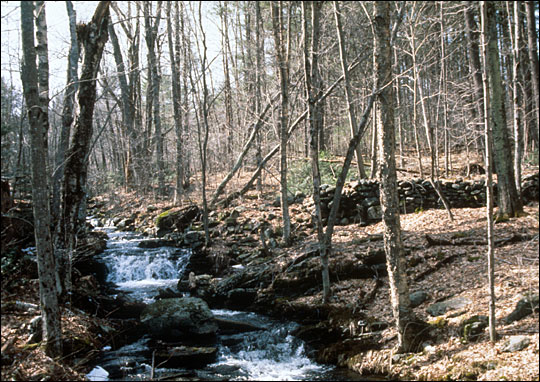 Harvard's 3,000 acre forest laboratory is providing valuable information about how forests absorb — and release — carbon from the air.

A place called Harvard Forest sounds like it should inspire deep thoughts about nature. And in fact, it does.

This forest in north central Massachusetts is under a microscope. Throughout the forest, you see signs of research under way. Hundreds of trees are labeled and wear shiny metal belts to measure their growth. Buckets collect falling leaves; holes in the ground yield data on the soil.

Slowly, the forest is giving up its secrets.

One of the most startling revelations came from instruments mounted atop several towers in the forest.

Harvard Forest researcher Julian Hadley leads the way up the steps of one such tower. Eighty feet above the forest floor, we climb into sunlight. The tops of hemlock trees form a blanket of green around us.

"You can't see the ground very well because of the dense foliage — which is good for people with acrophobia," Hadley jokes.

Above us, suspended on a steel rod like a weather vane, there is a sensor that detects the slightest air current and an intake valve that samples the air going by. This equipment is monitoring the flow of the most important greenhouse gas, carbon dioxide.

When scientists started monitoring the breathing of this stand of hemlock trees, they suspected any carbon dioxide captured by new growth would be canceled out by carbon dioxide released from decaying old trees. This is one of the oldest parts of Harvard Forest. Unlike other sections, it was never cleared for agriculture but was used instead as a woodlot. Some of the trees are 300 years old.

But the measurements delivered a surprise. The hemlocks capture a lot more carbon from the air than they give up: about a ton more, per acre, per year.

Equally surprising is the carbon's destination: "Only about half of the carbon that gets pulled out of the atmosphere is going into wood," says Hadley. "The rest must be going into the soil."

Other places in this forest, where the trees are younger, have been capturing even more carbon. And Steven Wofsy, the scientist at Harvard who pioneered the monitoring techniques used here, says at the site that he's watched the longest (17 years), the forest has been soaking up carbon faster and faster.

"That is a real mystery," he says. "We know where it's going, but we don't know why. We're trying to unravel that. It's one of the big questions in climate science."

For one thing, Wofsy would love to know how long this forest — and others like it — will keep capturing carbon. There's a lot at stake.

"The forests of the world are currently taking up 25 percent of all the carbon from burning fossil fuels, and we would very much like to know whether that's going to continue or whether it could turn around, and the forests put that back into the atmosphere," he says.

The forests of Massachusetts certainly won't continue to capture carbon if they're cleared. And Harvard Forest director David Foster is trying to ensure that they're preserved.

Those forests staged a remarkable recovery over the past century. In 1830, 60 to 80 percent of Massachusetts (like most of New England) had been cleared of trees. But when New Englanders abandoned farmland, the forests came back and now cover 60 percent of the state.

Now the forests are shrinking again. This time, Foster says, buildings, lawns and parking lots are taking over. And it's hard to imagine that forests ever will return to land covered by asphalt, the way they did to abandoned farmland.

Foster has been working on a strategy for keeping those forests in place. That strategy includes careful use of woodland — harvesting timber from it.

"These forests can recover from harvesting; after all, they recovered from complete deforestation," he says.

New Englanders consume a lot of imported wood. Foster says they should buy that wood locally. If landowners can make money from their forests by harvesting timber occasionally, they're more likely to agree to preserve that woodland.