Accessibility links
How to Cook Your Goose The first goose that food writer Bonny Wolf made was a disaster, a tough bird swimming in fat. Since then, she has grown to relish the bird's rich, flavorful meat — and its fat — and wants others to learn from her mistakes.

How to Cook Your Goose

How to Cook Your Goose 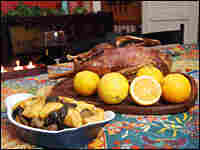 Goose offers rich, flavorful meat, and the fat isn't as bad for you as you might think. David S. Deutsch for NPR hide caption 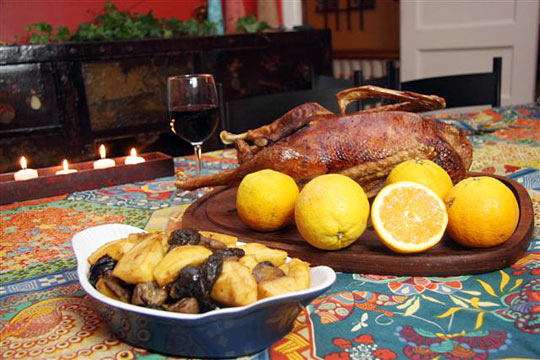 Goose offers rich, flavorful meat, and the fat isn't as bad for you as you might think.

Get recipes for Roast Goose with Prunes, Apples and Chestnuts(pictured above), Early American Goose and Perfect Roast Potatoes.

The Skinny on Goose Fat

For me, the fat is almost the point of cooking the goose. It is liquid gold. It has a silky texture and deep flavor and can be used for anything from frying onions to preserving food (confit). Goose fat has a high burning point, so when baking with it, the oven can be turned all the way up. Goose fat, therefore, makes incredibly crisp roast potatoes.

If I have goose fat in the freezer, the winter will not pass without at least one cassoulet. Goose fat is an important ingredient in the French peasant stew.

Jarred goose fat is available from specialty stores and through mail order. But if you have heeded the directions not to discard, by the time you've finishing cooking your goose, you should have enough to store for future cooking. It will keep in the freezer for at least a year.

For those who are horrified at the thought of using fat in these ways, goose fat is one of the better fats. It has less saturated fat than butter and is high in so-called heart-healthy monounsaturated fats.

All things, of course, in moderation. I am not advocating the daily use of goose fat. I wouldn't, for example, put it on my morning toast. It would, however, be delicious.

I once lost a latke competition to a woman who fried her potato pancakes in goose fat. I have no doubt that was the deciding factor. Goose fat imparts a far better flavor than peanut oil. It is the creme de la creme of fat.

The ancient Egyptians ate goose, and it has been popular in Europe since the Middle Ages. For centuries, it was Eastern European Jews' traditional Sabbath dinner. Marco Polo reported back from China that he had seen a 24-pound goose.

The story goes that Queen Elizabeth was eating goose — a favorite of hers — when she learned that her Navy had defeated the Spanish Armada in1588. She ordered that goose be served every Michaelmas (September 29) thereafter in honor of the victory.

The English who settled America ate goose. But American taste for it lessened with future generations, and goose became a rarity on tables in the New World. There are probably a number of reasons. Goose is all dark meat, with an intense flavor more often compared to beef than chicken. Goose is trickier to cook than chicken or turkey. Finally, and probably most significantly, a goose is one fat bird.

The first goose I made was a disaster, a tough bird swimming in fat. I bought the biggest goose I could find, seasoned it and stuck it in the oven. Learn from my mistakes.

A goose is not a turkey. You don't want an 18-pound goose. The younger (therefore smaller) the goose, the better it tastes. A good size is eight to 12 pounds. Larger (older) birds can be tough.

One good side effect of low demand is that geese are not mass-produced on factory farms. As a result, nice, fresh, free-range geese appear in the butcher's case around the winter holidays. At other times of year, frozen goose is usually available.

The next thing to understand about the goose is that we're talking about a serious amount of fat. This is the bad news and the good news.

A goose has much more fat than a chicken or turkey, although the meat itself is lean. There are easily detached pods of fat that can be pulled out of the goose. Do not discard. Put the fat in a container to render later. This is the good news part.

After removing the obvious fat, prick the goose all over the skin, taking care not to pierce the meat. This gives the remaining fat an escape route during cooking.

At this point, many cooks recommend blanching the goose in boiling water for a minute then letting it dry in the refrigerator for a day or two. This is good if you are organized and plan ahead.

The next step is to prepare a stuffing. (You can, of course, roast a goose without stuffing.) What kind of stuffing depends on the regional source of the recipe. In addition to cooking latkes in goose fat, German Jews stuffed a Hanukkah goose with apples, red cabbage and chestnuts. Germans also make sauerkraut or mashed potato stuffings. Scandinavians favor prunes and apples. The English — and therefore the early American colonists — liked a sage and onion stuffing.

The fat that accumulates in the roasting pan — and there will be plenty — should be siphoned off occasionally with a bulb baster so it doesn't catch fire. Remember, don't even think about throwing out the fat.

Goose is not to everyone's taste. It has a stronger flavor than the chicken breast so common in the American diet. Cooked properly, however, it can be a rich, flavorful meat. This is the time of year to give it a try. And, after carefully collecting the goose fat, anyone can make prize-winning potatoes.

I borrow from several traditions and make a fruit and chestnut stuffing for goose. Serve it with potatoes roasted in goose fat. The only thing to do ahead of time is marinate the prunes in sherry.

6 apples, cored, peeled and cut into one-sixths (any type of apple will work)

Put the prunes in a small saucepan, cover with sherry, bring to a simmer and cook 10 minutes. Turn off heat and let prunes sit for 2 hours.

Remove visible fat from goose and put aside to be rendered later. Rub goose inside and out with the orange half. Salt and pepper inside and out. With a skewer or other sharp tool, prick the skin all over, taking care not to pierce the meat.

Set the goose, breast side up, on a rack inside a deep roasting pan.

Drain the prunes and mix with apples, chestnuts and zests. Stuff into goose cavity and sew shut with kitchen string and skewers.

Place goose in oven and reduce heat to 375 degrees. Cook 2 to 3 hours, until juices run clear when pierced at joint. Let rest 15 minutes before carving.

Remove stuffing and serve with goose. 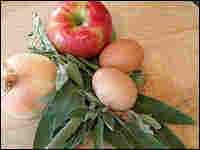 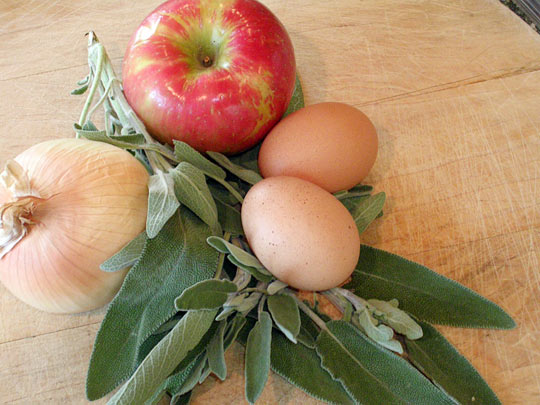 Early Americans ate goose, as they had in England. This version is adapted from Hearthside Cooking: Virginia Plantation Cuisine (Howell Press Inc. 1986) by Nancy Carter Crump. The book is used as a guide for demonstrators at historic sites that feature open-hearth cooking. The recipe is delicious.

2 cups tart apples (such as Granny Smith), peeled and chopped

Rinse goose thoroughly with clean water, pat dry and rub outside and cavity of goose with salt. Prick all over with skewer or other sharp tool, taking care not to pierce the meat.

Peel, quarter and parboil onions for 5 minutes. Drain and set aside to cool. Finely chop onion and combine with apple, egg, sage, pepper and butter. Mix well and taste for seasoning. Stuff mixture into cavity of goose. Sew cavity together with kitchen string and skewers.

Put prepared goose on rack in deep roasting pan and roast 2 to 3 hours, depending on size of bird, usually about 20 minutes per pound. Siphon off fat occasionally. If goose looks too brown, cover with aluminum foil for a time. Skin should be crispy and dark brown, but not black. Goose is done when legs move easily and juices run clear and a meat thermometer inserted into the thickest part of the thigh reads 180 degrees.

*The sage is a strong flavor so use to taste. 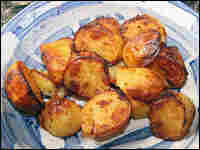 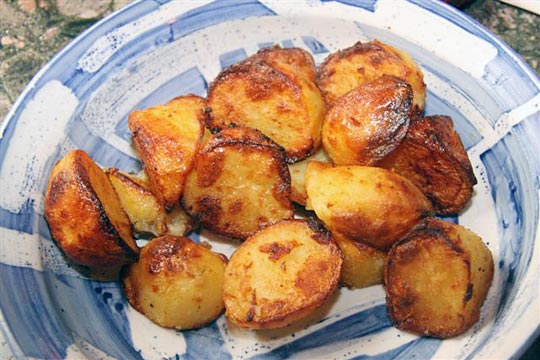 British cookbook writer Nigella Lawson says goose fat makes perfect roast potatoes. "That means sweet and soft in the inside and with a thick golden-brown carapace of crunch without," she writes. This recipe is adapted from her book Feast (Hyperion 2004).

Peel potatoes and cut each one into thirds by slicing off each end at a slant so that you are left with a wedge or triangle in the middle.

Put the potatoes into cold salted water in a saucepan, and bring to a boil, letting them cook for 4 minutes. Don't overcook or the end result will be mushy. Drain the potatoes in a colander and then return to the empty saucepan, sprinkling them with the semolina.

Shake the potatoes around to coat them well and, with the lid on, shake the pan and give the potatoes "a proper bashing" so their edges are a bit blurred. This helps make them crunchy.

Empty the goose fat into a large roasting pan and heat in the oven until hot. Put the semolina-coated potatoes carefully into the hot fat and roast until they are darkly golden and crispy, an hour or so. Turn them halfway through cooking.