Accessibility links
Ganges Dam Leaves Devastating Legacy In 1970, India built a huge dam called the Farakka Barrage to protect the port of Calcutta from silt flowing in the Ganges River. But the dam has had widespread and devastating effects for people living along the Ganges.

The fifth report in a six-part series 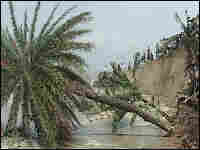 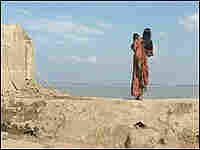 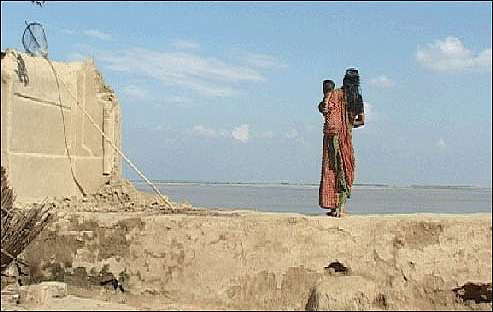 A villager gazes at where Panchanandapur village stood. 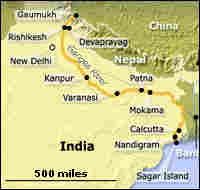 The Ganges River is 1,500 miles long from the Himalayas to the Bay of Bengal. The river's water is the lifeblood for more than 600 million people in India and Bangladesh. Lindsay Mangum, NPR hide caption 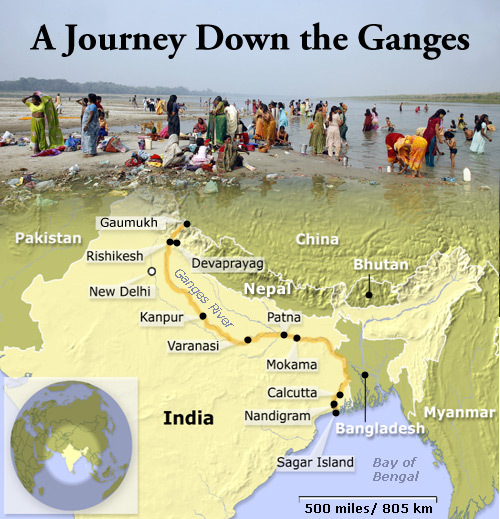 The Ganges River is 1,500 miles long from the Himalayas to the Bay of Bengal. The river's water is the lifeblood for more than 600 million people in India and Bangladesh.

In 1970, the Indian government built a huge dam called the Farakka Barrage, on the border with Bangladesh, to control the flow of the Ganges River.

But the gated dam has had widespread and devastating effects, both in the Indian state of West Bengal and neighboring Bangladesh.

In the fifth installment of a six-part series, independent producer Julian Crandall Hollick travels to a village in West Bengal to see how the dam has affected life and livelihoods on the Ganges.

Hollick starts his journey in Panchanandapur, a village that — on a map — appears to lie well inland from the Ganges. When he arrives at Panchanandapur however, Hollick finds the village's 5,000 residents living precariously on the banks of the river.

Kalyan Rudra, a geography professor in Calcutta, explains that the dam forced the Ganges to shift almost six miles eastward over 30 years, eroding most of the village. An indigo factory, sugar mill, hospital, police station and two-story government building were all swallowed by the river, among other settlements.

The Ganges' fast shift, however, made land that was once underwater reappear on the other side of the river bank. Though the villagers consider themselves part of West Bengal, the shift in geography has opened a territory question; neither West Bengal nor Bangladesh recognizes the displaced villagers.

At the dam itself, Hollick explores the history and legacy of the controversial project. The Farakka barrage was built at the narrowest point on the Ganges to divert water to Calcutta to the south and flush out the silt that was clogging up its port. But scientists say the project was ill-conceived from the start: Water upstream from the dam carried massive amounts of silt, dropping it directly behind the dam.

The buildup — almost 700 million tons annually — has clogged the dam's gates and raised the river bed more than 20 feet. The silt buildup has also forced the river to change its course, swallowing villages and buildings.

Months after his visit to Panchanandapur, Hollick returns to the village to find it completely swept away. Tajaml Huq, a village farmer, said he was asleep in his home when someone cried that the erosion had started. Moments later, his home disappeared into the river. 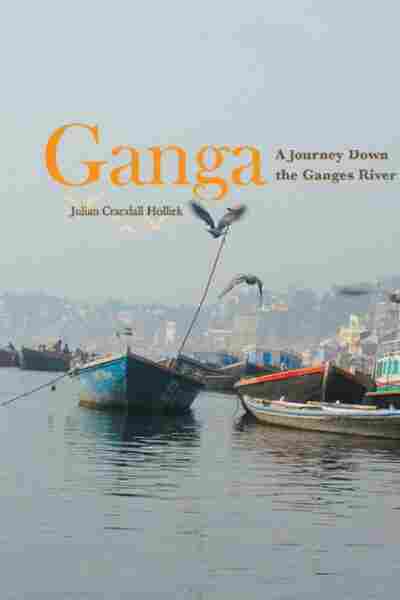 A Journey Down the Ganges River