Accessibility links
U.S., Turkey Share Intelligence on Kurdish Rebels Secretary of State Condoleezza Rice visit Iraq unannounced on Tuesday, but her trip was overshadowed by an incursion into the northern part of the country by Turkish troops hunting guerrillas of the Kurdish separatist group PKK. The U.S. has recently begun sharing intelligence with Turkey to pinpoint guerrilla positions.

Secretary of State Condoleezza Rice visit Iraq unannounced on Tuesday, but her trip was overshadowed by an incursion into the northern part of the country by Turkish troops hunting guerrillas of the Kurdish separatist group PKK. The U.S. has recently begun sharing intelligence with Turkey to pinpoint guerrilla positions.

And we begin today with the Turkish military action and U.S. diplomacy in northern Iraq. Several hundred Turkish troops entered northern Iraq this morning. It's part of an ongoing operation to root out Kurdish separatist rebels known as the PKK. Turkish warplanes have also bombed suspected rebel bases along the border. The operations have the tacit approval of both the U.S. and Iraqi governments, and Washington has been providing Turkey with intelligence on the rebel positions. Today's raid overshadowed a visit by Secretary of State Condoleezza Rice to the northern Iraqi city of Kirkuk. We'll hear a little bit about the importance of that city in a few minutes.

NORRIS: NPR's Soraya Sarhaddi Nelson joins us now on the line from Baghdad. Soraya, what's the latest you can tell us about this incursion?

SORAYA SARHADDI NELSON: Well, we're still not hearing much from the Turkish side, but the Kurdish officials up north as well as the PKK or Kurdish Worker's Party spokespeople say that the soldiers have gone back into Turkey. They did not come in very far. Reports were suggesting was maybe a mile and a half or so. And this is an area up north that's near the Iranian border. We're also not hearing much about casualties at this point, but we do know this is a very remote area that's sparsely populated.

NORRIS: A remote area where tensions tend to run high. And we just noted that Washington has been providing Turkey with intelligence on the rebel positions. What's been the Iraqi reaction to this attack?

NELSON: Well, the Iraqis obviously get upset because they don't feel that any country has a right to cross their borders. But they also understand and they certainly reject having terrorists on their soil. And the PKK, at this point, is identified as a terrorist party by many countries in the world, including the U.S. and Turkey, and so the reaction today was fairly subdued. The parliament did react to the attack by error a couple of days ago because one civilian was killed and several were wounded and there was some discussion of displacement which Turkey also denied. But Iraqi foreign minister Hoshyar Zebari, he was with Condoleezza Rice today at a press conference, and he said they were monitoring the ground incursion closely. He did make a statement saying he would prefer that there were coordination of the - with, or between the Turkish government and Iraq about such operations, but he did not condemn it.

NORRIS: And what about Secretary Rice? Did she have anything to say about the attack?

NELSON: Well, she was fairly vague today about the invasion. She was speaking with the foreign minister. But what she did say was that the United States, Iraq and Turkey share a common interest in fighting Kurdish rebels. But she also had this admonition, and we have this tape here of what she said.

Secretary CONDOLEEZZA RICE (U.S. Department of State): This was a Turkish decision. And we have made clear to the Turkish government that we continue to be concerned about anything that could lead to innocent civilian casualties or to a destabilization of the north.

NELSON: What the secretary didn't say is that Americans have to get permission for Turkish warplanes to enter Iraqi airspace, which apparently we did for at least a few hours on Sunday. And the other thing that we're doing is we're providing intelligence or what's called intelligence sharing with the Turkish authorities. This was a decision reached after the November 5th meeting between President Bush and the Turkish prime minister.

NORRIS: Now, before we let you go, Soraya, I just want to ask another question about Secretary Rice. She began today's visit to Iraq with a stop in the northern city of Kirkuk. What did she do there?

NELSON: Well, she was reinforcing the fact that violence is down and that political progress is needed. And in particular, in Kirkuk, which is known as the Iraqi Jerusalem, if you will, where you a have a lot of tensions between Arabs and Kurds and Turkmen who are all vying for control of that city given the fact that it's rich in oil. I mean, she wanted to promote this political progress and also push at the same time to make sure that there is reconciliation and that these things are handled peacefully.

NORRIS: That was NPR's Soraya Sarhaddi Nelson speaking to us from Baghdad. 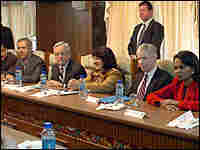 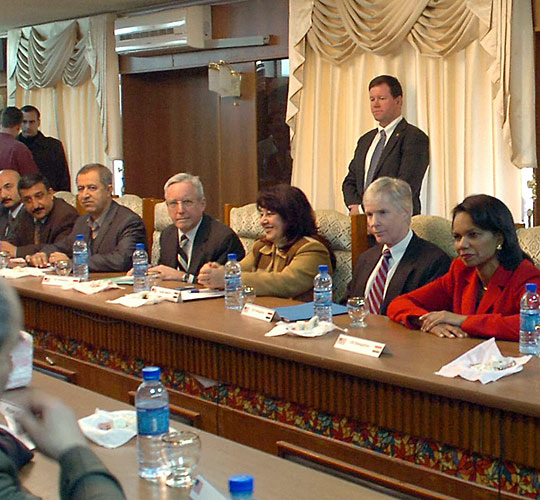 Secretary of State Condoleezza Rice on Tuesday paid an unexpected visit to Kirkuk, even as the Turkish army sent soldiers about 1.5 miles into northern Iraq in a hunt for Kurdish rebels.

Rice met with members of a civilian-military reconstruction unit and about two dozen provincial politicians of varying backgrounds, emphasizing the need for unity.

"It is an important province for the future of Iraq, for a democratic Iraq, an Iraq that can be for all people," she said at the start of the meeting with the provincial leaders.

Sunni Arabs ended a yearlong political boycott earlier this month in Kirkuk — the hub of Iraq's northern oil fields — under a deal that sets aside government posts for Arabs. It was the biggest step yet toward unity ahead of a referendum on the area's future.

Rice highlighted that development — although a separate ethnic group is still boycotting the provincial governing council — and the new role of the United Nations in resolving the future of disputed Kirkuk.

The U.N. representative, who arrived last month, is aiming to help manage competing interests leading up to the Kirkuk referendum, which is expected in late 2008. Iraq's constitution required the referendum by the end of this year.

Turkey and other countries in the region with Kurdish minorities have long feared that Kurdish control of Kirkuk's vast wealth would encourage Kurds to declare independence from Iraq — a move that Iraq's neighbors could not tolerate.

Kurds are generally thought to have a slight majority in the province, with Sunni Arabs close behind, though a census has not been conducted in 50 years. Provinces cannot schedule new elections until passage of a law known as the Provincial Powers Act, which is currently mired in Iraq's parliament.

Rice's visit was meant to underscore an overall reduction in violence that the Bush administration largely attributes to the escalation of U.S. forces he ordered a year ago.

Attacks in Iraq are at their lowest levels since the first year of the American invasion in 2003, finally opening a window for reconciliation among rival sects, Lt. Gen. Ray Odierno, the No. 2 commander in Iraq, said Sunday.

The Turkish army's incursion into northern Iraq represents a new threat, however.

Turkish officials said troops must cross the border to pursue Kurdish rebels who use the border region to attack Turkey.

Turkey sent 300 troops into northern Iraq at about 3 a.m. Tuesday, said Jamal Abdullah, a spokesman for the regional Kurdistan government. He said the region was a deserted mountainous frontier area.

The Kurdish Workers' Party, or PKK, has battled for autonomy in southeastern Turkey for more than two decades and uses strongholds in northern Iraq for cross-border strikes.

It was unclear how long the Turkish soldiers who entered Iraq on Tuesday would stay, but a Turkish government official said they were sent as reinforcements to existing Turkish troops stationed farther inside Iraq.

About 1,200 Turkish military monitors have operated in northern Iraq since 1996 with permission from local authorities. A tank battalion has been stationed at a former airport at the border town of Bamerni and a few other military outposts were scattered in the region. Ankara rotates the troops there.

Asked about a reported clash between the Turkish troops and Kurdish rebels inside Iraq, Turkey's President Abdullah Gul said: "From now on, whatever is necessary in the struggle against terrorism, it is being done."

Iraqi government spokesman Ali al-Dabbagh said the incursion "is not acceptable and will lead to complicated problems."

"Iraq understands the threat the PKK represents, one that endangers Turkish security," al Dabbagh said. "But Iraq rejects any Turkish interference in Iraq."

Al-Dabbagh said the Iraqi government was given no warning about Tuesday's incursion.

Abdullah, the spokesman for the regional Kurdish government, also criticized the operation and cautioned that Turkish forces should be careful not to harm civilians who might be living in the area.

On Sunday, Turkey conducted airstrikes against PKK rebels in northern Iraq. As many as 50 fighter jets were involved in the attack, the biggest against the PKK in years.

The Iraqi parliament on Monday condemned the bombing, calling it an "outrageous" violation of Iraq's sovereignty. Turkey said Sunday's attack used U.S. intelligence and was carried out with tacit U.S. approval.

Kirkuk is an especially coveted city for both the Shiite-dominated Iraqi government in Baghdad and the Kurdish one in Irbil.

Kurds want to incorporate it into their self-rule area, but the idea has met stiff resistance from Arabs.

Much of Iraq's vast oil wealth lies under the ground in the region, as well as in the Shiite-controlled south. Apart from the petrodollars, Kurds have a strong cultural and emotional attachment to the area and consider Kirkuk, which they call "the Kurdish Jerusalem," part of their ancestral homeland.

Rice did not hold a separate meeting with the semiautonomous Kurdish leadership while in Kirkuk. Kurdish leaders have chafed under U.S. demands for greater inclusion in the Baghdad government and swifter work to complete a framework law for managing and distributing Iraq's oil wealth.

Kurdish leaders also favored a quicker referendum on Kirkuk and resented U.S. pressure this fall to do more to hunt the Kurdish rebels.