Accessibility links
Moby: Making His 'Last Night' One to Remember Moby gives music away for free, calls himself a drunk and talks about his return to dance music with the songs on his forthcoming album, Last Night.

Listen
Moby: Making His 'Last Night' One to Remember

'Only the Lonely (Know the Way I Feel)' - Roy Orbison 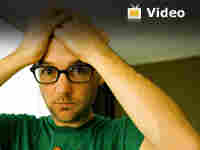 Moby says he writes hundreds of songs, and then throws most of them out. Courtesy of Moby hide caption

Video: An interview with Moby
toggle caption
Courtesy of Moby 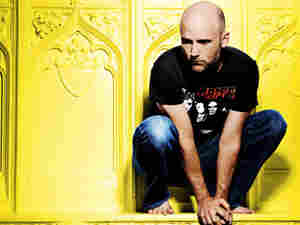 In March, Moby will release his sixth studio album, Last Night. On it, Moby says, he's trying to get back to his dance-music roots. The album is meant to condense one epic, eight-hour night into 65 minutes of music.

Moby came out of the New York City club scene of the '80s, and has always loved the rave-y, piano-heavy, four-on-the-floor dance anthems of the era. This is particularly evident on his new songs, such as "Everyday It's 1989."

The record's single, "Alice," started as a mistake. Moby says he was playing the bassline through a broken distortion pedal and ended up with a strange sound that he decided to keep. Then he assembled a motley crew to sing over it, including a friend who makes her living as a burlesque dancer, someone whose songs he heard on MySpace and friends of someone at his management company.

Though he's been busy writing songs, Moby found the time to start a new venture: MobyGratis offers songs to filmmakers for free. While a film student at SUNY Purchase, Moby says, he met a lot of people involved with film, and their biggest complaint was always licensing music. Record companies wouldn't return phone calls, publishers would say no, or whoever owned the song wanted too much money. He started MobyGratis to circumvent that process.

Generosity and hard labor aside, Moby insists he is not the teetotaling, humorless vegan some members of the press have portrayed him to be. In fact, he says, "I'm just a drunk who makes music. I go out too often, and I drink too much. I like tea and yoga, but I don't do yoga."

On the Bryant Park Project blog: Moby annotates his playlist and previews his new album.

Video: Moby talks about editing yourself.