Accessibility links
'Sweeney Todd: The Demon Barber of Fleet Street' Blood flows freely and imaginatively in this splendid adaptation of the Stephen Sondheim musical — about a vengeful barber and his pie-baking landlady, who doesn't want the victims to go to waste. Happily, so do melody and feeling. (Recommended) 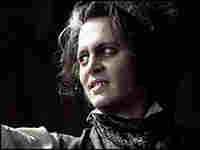 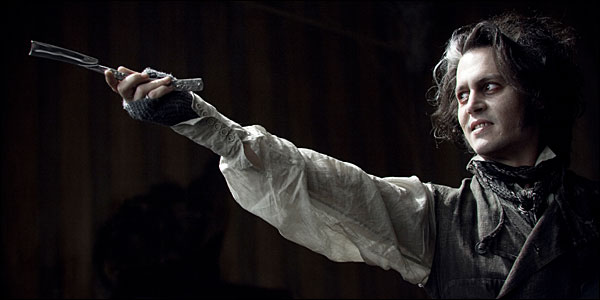 London's skies are raining blood during the opening credits, which amounts to a directorial declaration that meat pies and the fact of Johnny Depp's singing aren't going to be the only things for audiences to buzz about.

In Tim Burton's splendid adaptation of the Stephen Sondheim-Hugh Wheeler musical — about a barber who slashes the throats of his clientele and a pie-baking landlady who doesn't want the corpses to go to waste — blood flows both freely and imaginatively. Happily, so do melody and feeling.

Depp's snarling, vengeance-crazed Sweeney Todd is a wonder, and Helena Bonham Carter's Mrs. Lovett wields her rolling pin deftly. Both look as if they comb their hair with garden rakes and roll in flour before they head out in the morning, to greet a London that Burton films in sooty grays with the occasional blood-red highlight.

You expect the stars to nail the roles emotionally, but they turn out to be decent vocalists as well, with pop voices that work nicely in circumstances where projecting to the back row isn't an issue. Also handling vocal chores better than might be expected are Alan Rickman as Sweeney's nemesis, Judge Turpin, and Sacha Baron Cohen as a rival barber who fatally underestimates the competition.

Newcomers Jayne Wisener and Jamie Campbell Bower (whose Anthony looks from some angles uncannily like Claire Danes) are effective as the young lovers. Timothy Spall comes across as creepiness itself as the man who tries to keep them apart, and one of Burton's more startling choices — casting a 10-year-old boy as Toby, a pivotal part usually played by an adult male — pays eerie dividends in the final reel.

In short, the movie may substitute Grand Guignol for laughs at times, but it's spectacularly stylized — each throat-slashing exceptional — persuasively sung, and imaginatively adapted for the screen. (Recommended)