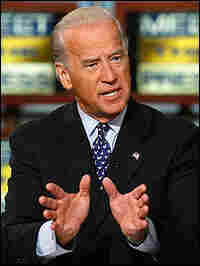 And right now, THE BRYANT PARK PROJECT continues its look at hometown perspectives on national political candidates. And today, we're on to Joe Biden, who has been the Democratic senator from Delaware since 1972. He's hitching his presidential campaign to his experience. Here's part of a recent ad.

JOSEPH BIDEN: The next president has to act. The Biden plan to end the war in Iraq has already won bipartisan support. When Pakistan erupted in crisis, I spoke to Musharraf before Bush did. You don't have to guess what I'll do as president. Just look at what I've done.

WOLFF: However, Biden's poll numbers are closer to Mike Gravel's than they are to Barack Obama. So...

WOLFF: Yeah. How? So what gives? Or maybe more to the point, what doesn't give Joe Biden a realistic shot at the presidency? Joining us now to give us hometown perspective is Allan Loudell, news anchor and host at 11:50 a.m. WDEL in Delaware. Hello, Allan.

WOLFF: How are you?

LOUDELL: Well, I'm doing fine. How are you guys?

WOLFF: I'm very curious about Joe Biden, because his failure in the polls doesn't add up to me. Let's start with Delaware. How would you describe the state of Delaware's political leanings? Red, blue, purple or somewhere in between?

LOUDELL: It used to be purple, but increasingly, Democrats from top to bottom. Some pockets of conservative Republicanism, but even the upstate Republicans in Delaware, I think, when they look at the national ballot, will go with the D's.

WOLFF: Okay. So to try to understand Delaware, talk about the special interests there. In the northwest, it's the lumber industry. In Louisiana or Oklahoma or Texas, it's the oil business. What is the special interest of Delaware to whom a guy liked Joe Biden might conceivably be beholden?

LOUDELL: Might conceivably - well, I would say the whole congressional delegation with Biden. But...

LOUDELL: And don't forget, we got America's number one chicken-producing county, Sussex County. So, for example, if you have a trade bill with Russia, and Russia would have the ability to block the import of U.S. chickens, Biden's going to try to protect Delaware on that.

WOLFF: I enjoyed some Sussex County chicken just last evening. It was delicious, I must say.

LOUDELL: And anybody who has not enjoyed paying off a credit card from Wilmington, Delaware, the other day.

WOLFF: I'm way behind on that, but thanks for bringing it up. Now, on which of his policy positions would you guess that Joe Biden doesn't want Democratic voters to focus? Is there something he has done, which if his opponents would seize it, would embarrass him?

LOUDELL: You know, he's - well, you know, he had a book that just came out recently, and it's quite candid about all his failings and what he did wrong in life. And the one thing he did not bring up in that book was the Clarence Thomas hearings. You heard about Judge Bork. You don't hear about Clarence Thomas. Some people thought there was a reason for that in that he got into a lot of trouble with those, in particular, some women who were upset over the way that - you know, it seemed at the beginning there might have been a way to not have a public testimony from Anita Hill. But other than that, I mean, he says what he says and, you know, arguably, there's less pandering, it would seem, than from some of the others.

WOLFF: So here we have a guy who panders less, who has a clear understanding of the Constitution, who has extraordinary experience in foreign policy and who gets a lot of attention in debates with pithy answers. He seems to have enormous appeal. The only thing anyone I talk to can put a finger on as a detraction is that he puts his foot in his mouth.

LOUDELL: Oh, he talks too much. And, of course, there was one debate where he had a one word answer. So...

LOUDELL: But, you know, that is in part of his appeal. And I don't mean to minimize his critics. He does have critics in Delaware. The conservative Republicans, although, when they ran Ray Clatworthy against him a couple of times, you know, it didn't do very well. Although Clatworthy did score against Biden better in the second race than the first.

STEWART: Allan, is he well-liked in his home state?

LOUDELL: But, you know, at one point Castle was winning reelection with the greatest margins of all of our statewide federal politicians, of which, of course, we have one U.S. senator, or two U.S. senators and one member of the U.S. House.

WOLFF: I guess that we're winding down, but if you could boil it down, Allan - it's sort of what I'm trying to get at with this entire segment. You, as a close observer of Joe Biden, how would you explain if you were forced to in say, oh, 23 seconds or so...

WOLFF: ...how would explain Joe Biden's total political impotence in the race for the Democratic nomination?

LOUDELL: I want to call it total political impotence. A lot of people seem to like him as their second choice. The question is, will it gel? I think it's almost like George Bush. You used to hear terms in the Republican Party when he ran the first time, that he took all the oxygen out of the room from the others. And I think Hillary Clinton and Barack Obama have taken so much oxygen out of the room, and not to mention Edwards, has left very little left for the second tier candidates. When Biden contemplated his candidacy, he did not account on Obama running.

LOUDELL: Thus the anti-Hillary, in a way.

WOLFF: Well, there you have it. Allan Loudell, thank you so kindly. News Anchor and host of 1150 AM WDEL, thank you, kindly, this morning.

Coming up on THE BRYANT PARK PROJECT, Moby will talk about his new album and do we tell you? He is deejaying our show today. The music you're hearing right now, picked out by the master himself.

STEWART: This is THE BRYANT PARK PROJECT from NPR News.