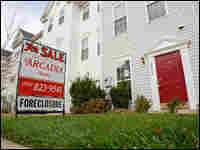 A "Foreclosure" sign is posted with the "For Sale" in front of a townhouse in Herndon, Va., in November 2007. The problem has been especially acute for people who took out subprime mortgages. Paul Richards/AFP/Getty Images hide caption 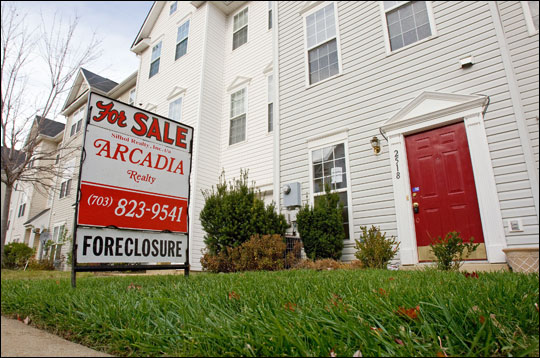 A "Foreclosure" sign is posted with the "For Sale" in front of a townhouse in Herndon, Va., in November 2007. The problem has been especially acute for people who took out subprime mortgages.

Thousands of U.S. homeowners weren't able to pay their home loans in November, pushing up the number of foreclosure filings 68 percent nationwide from the same period a year ago.

"It's a little bit of good news in the otherwise murky real estate market right now," said Rick Sharga, RealtyTrac's vice president of marketing. "The fact that we're seeing a 10 percent decrease is significant. It's a good thing."

The news comes a day after the Federal Reserve Board took steps to halt predatory lending practices that brought on the nation's worst housing crisis, that has since spread to world credit markets.

The filings include default notices, auction sale notices and bank repossessions. Some properties might have received more than one notice if the owners have multiple mortgages.

Some 43 states saw an increase in foreclosure filings over the last year, with Nevada, Florida and Ohio charting higher.

The rise came despite a respite in adjustable-rate mortgage resets, Sharga said.

Such loans typically have a low introductory interest rate, then reset sharply higher after a set period. The number of borrowers who took on adjustable-rate mortgages offering a teaser rate for just two or three years rose sharply in the last couple of years of the housing boom, particularly in high-priced states such as California.

But many borrowers have been unable to afford the increased payments that come with the resets, and falling housing prices have made it harder to refinance or sell.

"We'll see another fairly big spike in (foreclosure) filings in early '08," Sharga projects. "Then there's another group of loans that's due to reset in May and June, so we'll see another wave of defaults probably in the fall."

Experts estimate that about 2 million adjustable-rate mortgages are due to reset at higher rates in the next seven months.

Nevada reported one foreclosure filing for every 152 households, earning the state the highest rate in the nation for the 11th month in a row. The state had 6,694 filings in November, up 167 percent from November 2006.

The Fed's new plan establishes rules that safeguard subprime borrowers — those with bad credit and low incomes. Subprime borrowers were hit hardest by the housing and credit debacles. The rules apply to new loans made by banks, mortgage brokers and other lenders.

In a 5-0 vote, the Fed agreed to set parameters that would halt seemingly carefree lending practices by requiring banks and other mortgage issuers to both lend only to those who prove their income and to make sure conditions of the loan are understood by borrowers.