Accessibility links
Iraqi General Works to Transform National Police Few of Iraq's nascent security forces have been as reviled as the country's national police, which, critics say, has been infiltrated by death squads and is riddled with corruption. But the head of the beleaguered force is trying to turn it around. 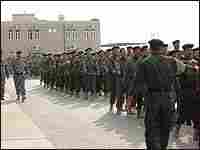 About 1,900 enthusiastic Iraqi cadets march in formation at the national police force's training facility southeast of Baghdad. For the first time, there are as many Sunnis as Shiites training here. Soraya Sarhaddi Nelson, NPR hide caption 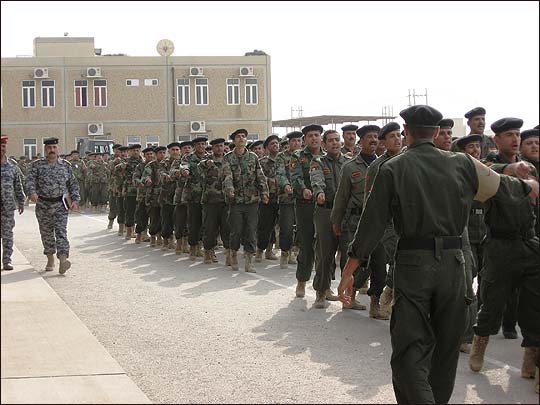 About 1,900 enthusiastic Iraqi cadets march in formation at the national police force's training facility southeast of Baghdad. For the first time, there are as many Sunnis as Shiites training here.

Few of Iraq's nascent security forces have been as reviled as the country's national police.

Critics say the Shiite-dominated, 26,000-man force has been infiltrated by death squads and is riddled with corruption. There have been repeated calls from Americans and Iraqis for the force to be disbanded.

But the head of the beleaguered national police is trying to turn the force around with Western help.

About 1,900 enthusiastic Iraqi cadets march in formation at the police force's training facility southeast of Baghdad — in the middle of nowhere. For the first time, there are as many Sunnis as Shiites training here to be national policemen.

They come from towns all across Iraq, many of them recruited from Sunni tribes who are joining with U.S. and Iraqi forces to fight al-Qaida in Iraq.

It is hoped the new class will help transform the national police into the force that American and many Iraqi officials wanted in the first place: one that is professional, well trained and reflecting Iraq's religious and ethnic makeup. It would be a force to not only fight criminals and insurgents, but to protect the new, democratic Iraq against any potential military coup.

Still, Col. David Boslego, the senior American adviser to the national police chief, says it has been tough to persuade Iraqis that the force has changed.

"So, it's an uphill battle in that respect to overcome a bad reputation that had existed in the past — and I think is being overturned by their current performance," Boslego says.

Many of the cadets say they hope to change the image of Iraq's national police. All of the cadets interviewed say they want to help Iraq out of its sectarian quagmire.

Hassan Daya Kadim, a Shiite and former army officer from volatile Diyala province, says he and his classmates want to make the national police force a symbol of hope for his people — one that roots out domestic and foreign terrorists alike.

Nazar Abdulkarim Tahar, a Sunni who hails from western Anbar province, adds that he had no qualms about joining the largely Shiite force. He says all of the trainees here get along well, whatever their religious or ethnic affiliation. They sleep in the same dormitories, eat in the same chow hall and pray in the same mosque.

The new, integrated class is the brainchild of Iraqi Maj. Gen. Hussein al Awadi, who heads the national police. Since assuming his post in late 2006, Awadi says he has fired about 9,000 officers and commanders to eliminate death squads and corruption within his ranks.

"Any new force that's created is going to have its share of problems," Awadi says. "We were in a hurry, so there wasn't time to develop good training. Nor to set standards and make sure the force was diverse, given some sects were preventing their members from joining. But we are working hard to correct all of this."

Back at the training base in Numaniyah, cadets practice raiding homes. They call out "police" three times in Arabic before bursting into concrete, two-story buildings.

Things don't go smoothly at first. Like when the cadets fail to provide cover for one another during the search. Australian trainer John Clay critiques the cadets' performance for them with the help of a translator.

"If we were learning this back in Australia or the States or something, you'd be doing it for a week," Clay says. "A week of learning how to clear a building, to clear a house properly — it's trying to fit a lot in a short time."

The cadets will spend 12 weeks in training before they are deployed. But already the new program has softened some of the vocal critics of the Iraqi national police.

Omar al Jubouri, who heads the Islamic Party's human rights office, says the national police force — like all of Iraq's security forces — is improving with the incorporation of Sunni recruits. He also says that Iraqi Gen. Awadi has done a lot to heal national wounds.

But Jubouri says he worries that progress will be fleeting unless the Iraqi government codifies the diversity and the new standards that the national police force commander has introduced.