Accessibility links
Popular in Kindergarten: Sexy Dolls Parents are finding surprisingly risque toys on the shelves these days, as kids become part of a phenomenon known as "age compression." 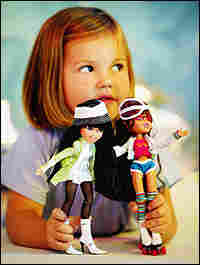 Flummoxed at the toy store by dolls with hot pink bikinis and glittering spiked heels?

Chatterjee says that toy manufacturers are putting sexier dolls on the shelves these days, and that kids are growing up at more rapid clip than they once did. "Whereas kids used to play with a toy until age 12, now they're stopping after age eight," she reports. "They're becoming adults much faster."