Accessibility links
U.N. Security Council Deadlocked over Kosovo The future of Kosovo again tops the agenda of the United Nations Security Council. The U.N. has been running the region ever since NATO helped end a Serb crackdown on ethnic Albanians there eight years ago. But Kosovo's Albanians are planning to declare independence, a move resisted by Serbia.

The U.N. Security Council is deadlocked over what to do about Serbia's breakaway province of Kosovo.

The U.N. has been running the region since 1999 after NATO helped end a Serb crackdown on ethnic Albanians there. Intense negotiations about Kosovo's status have failed to bridge the gap between the parties. Now, the Kosovo Albanians are planning to declare independence, and Serbia is warning that could set a dangerous precedent.

The Security Council debate pitted not just the Kosovo delegation against Serbia — which wants to retain the province — but also the U.S. and Europe against Russia.

Unlike his Western counterparts, Russia's Ambassador Vitaly Churkin said he still believes the impasse can be resolved with more talks on Kosovo's status.

"It did show that there are pessimists, and there are optimists in the council. One thing I can tell you, we are among the optimists; the other thing is we are certainly not alone in being optimists; and the third thing is the optimists base their opinion on the solid ground of international law," Churkin said.

U.S. and European diplomats said months of intensive talks and the Security Council debate had shown the world that the positions of Serbia and Kosovo are irreconcilable and the status quo is no longer tolerable. U.S. Ambassador Zalmay Khalilzad made one final pitch in favor of supervised independence for Kosovo — an idea put forward earlier this year by U.N. envoy Martti Ahtisaari.

"The time has come to move forward," Khalilzad said. "I did call on our Russian colleague, Ambassador Churkin, one final time to embrace the Ahtisaari plan as the sensible way forward with council endorsement."

Churkin said he was not about to change his mind, and he urged the U.N. to disregard any move by Kosovo to unilaterally declare independence.

But that is exactly what is expected given the diplomatic deadlock.

Kosovo's President Fatmir Sejdiu said that Kosovars are exhausted after years of isolation, war and political limbo, and they plan to move ahead with independence with backing from most of Europe and the U.S.

Serbian Prime Minister Vojislav Kostunica said he would declare any independence move by Kosovo to be null and void. And he suggested Serbia might try to take legal actions against any country that recognizes an independent Kosovo.

Kostunica said he would defend Serbia's territorial integrity with everything in his country's diplomatic arsenal — but he would not use force.

"There is something that is much stronger than war and weapons," Kostunica said. It is this weapon that Serbia has at this moment. It is full respect of law and international law, and it is very clear that is the official position of the Serbian government. We will keep on defending in that manner Serbia."

Serbia and Russia have repeatedly warned that if Kosovo declares independence it would set a dangerous precedent for other ethnic enclaves in the world.

Khalilzad argued before the council that Kosovo is in a unique situation. He said the policies of ethnic cleansing pursued by former Serb leader Slobodan Milosevic against Kosovo Albanians had forever ensured that Kosovo would never again return to Belgrade's rule.

Q&A: The State of Kosovo 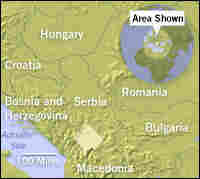 Kosovo, in yellow, surrounded by its Balkan neighbors. Click to view a larger map of the region. Lindsay Mangum, NPR hide caption 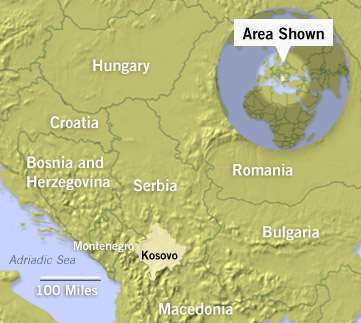 A map of Kosovo and its Balkan neighbors.

After years of dispute over Kosovo, the breakaway Serbian province is expected to declare its independence this weekend.

The plan includes keeping NATO's peacekeeping force in place — and having the European Union take over from the United Nations in overseeing the judicial system and ensuring rule of law.

Serbia has rejected the idea of an independent Kosovo, but has said it would not use force against the province.

Here's some background on the situation:

Kosovo is in southern Europe. It is a landlocked area a bit smaller than Connecticut — north of Macedonia, east of Albania, south of Serbia, and west of Bulgaria. It's at nearly the same latitude as the "ankle" of Italy.

What is Kosovo's legal status?

Kosovo is technically still a part of Serbia, which was the dominant republic in the former Yugoslavia. But since 1999, Kosovo has been run by a U.N. mission and protected by NATO troops. When Yugoslavia existed as a country, Kosovo was — for part of that time — an autonomous area within Serbia.

What led to the current situation?

In 1999, NATO bombed Serbia in order to stop what the organization called a "campaign of terror" against ethnic Albanians in Kosovo, carried out by the then Yugoslav military and irregular Serb paramilitary groups. At the end of the bombing, the Security Council approved Resolution 1244, which gave a U.N. mission the responsibility to administer Kosovo, while developing elements of a local provisional government, until a final political solution could be arranged for Kosovo.

The antagonism between Serbs and Albanians has roots that date back to the Middle Ages. These tensions have flared into violence in varying degrees since then, including in the years just prior to the 1999 bombing.

What has Russia's stance been?

Russia's major public objection is that the United Nations doesn't have the right to carve up sovereign states and warns this will set a bad precedent. Moscow refers frequently to U.N .Security Council resolution 1244, which mentions the U.N. "commitment" to the "sovereignty and territorial integrity" of Yugoslavia. In addition, Moscow backs Serbia in saying that Serbs in Kosovo have not, and cannot be, adequately protected, and says further talks should be held between Serbia and Kosovo.

The United States and the Kosovo government have rejected the idea of more talks, and the U.N. envoy has said the possibilities for discussion are exhausted. The United States also argues that Kosovo is a unique case and should not be seen as setting a precedent for other independent-minded or "breakaway" regions around the world. The situation in Kosovo is being watched closely by people elsewhere around the world who have been seeking their own states, including the Kurds in northern Iraq and the Basques in Spain. A number of such conflicts directly involve Russia, including in Chechnya, Transdniestr, South Ossetia and Abkhazia.

Why is this important to the United States?

The United States got involved militarily against the Serbs in Kosovo in 1999 after sitting out similarly horrible wars in Bosnia and Croatia. The U.S.-led NATO bombardment set the stage for U.N. governance of Kosovo — and for the current question of its future status. In the U.S. view, the only possible path to stability in the Balkans region is for Kosovo to become independent.

What are the chances of more violence in this area?

Officials from both sides have assured the international community that they would not resort to violence. After the December 10 deadline for an agreement passed without any resolution, Kosovo's prime minister-designate, Hasim Thaci, began talks with his ethnic Albanian political rivals. Thaci leads one of the biggest ethnic Albanian parties.

At the same time, Serbian Prime Minister Vojislav Kostunica said his country would not accept European Union supervision in Kosovo, and would abandon efforts to join the European Union, if the group recognizes Kosovo as an independent state. The Serbs have insisted that the Kosovo question must be resolved in the United Nations Security Council. That's because Russia, a traditional ally of the Serbs, has a veto on the council. Russia has already said it will ask the U.N. Security Council to nullify any unilateral declaration of independence by the Kosovo Albanians.

Serbia has said it would not use force against the breakaway province, though it's possible that fringe elements on both sides could take advantage of the uncertainly to re-ignite violence.