Accessibility links
Piano Prodigy Matt Savage on Piano Jazz Savage is a 14-year-old piano genius — an exceptional feat for anyone, much less a young man who has been diagnosed with autism. On Piano Jazz, he's given free reign to show off his enthusiasm for jazz and improvisation. 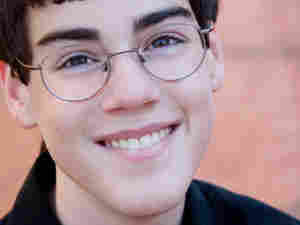 Pianist Matt Savage is just barely a teenager, yet he's already played with Dave Brubeck, Chick Corea, Clark Terry and Jimmy Heath. It's an unlikely start for a young man who, as a young child, was unable to tolerate noise, much less appreciate music.

Savage hails from Sudbury, Mass. At age 3, he was diagnosed with a "high-functioning" form of autism called Pervasive Developmental Disorder. With intensive therapy and a special diet, Savage has seen his initial aversion to sound replaced by a remarkable attenuation toward music. By age 6, Savage was teaching himself to read music and play piano. His parents enrolled him in classical music studies, though it wasn't long before he'd refocused on jazz.

At age 7, Savage began studying at the New England Conservatory of Music, and released his first solo album in collaboration with the school later that year. After his second solo album in 2001 and his first trio album, released in 2002, Savage found himself the subject of television and radio features, including an interview with Barbara Walters for ABC's 20/20, an appearance on The Today Show and a feature story on NPR's All Things Considered. Savage's amazing abilities are also featured in part two of a three-part documentary called Beautiful Minds — A Voyage into the Brain.

At 15, Savage is promoting and performing following the release of his sixth studio album, Hot Ticket. His list of accomplishments includes being the youngest person to be signed as a Bosendorfer piano artist and the youngest performer to have played at New York's legendary jazz club, Blue Note. Savage has also won three consecutive ASCAP "Young Jazz Composer" awards.