Accessibility links
Thai Elections Could End Country's Political Crisis Backers of an elected Thai government lead by exiled Prime Minister Thaksin Shinawatra, which was thrown out by a military coup last year, have the chance to surge back into office on a wave of strong voter turnout. 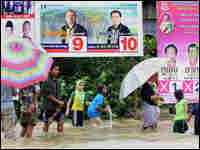 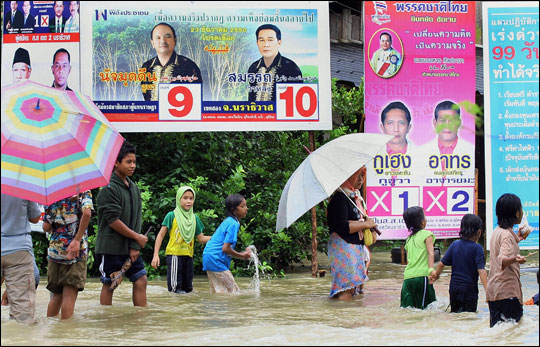 The backers of exiled Prime Minister Thaksin Shinawatra have a chance to return to office in the country's first election since the 2006 coup. Ryan Pierse/Getty Images hide caption 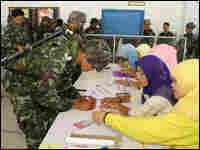 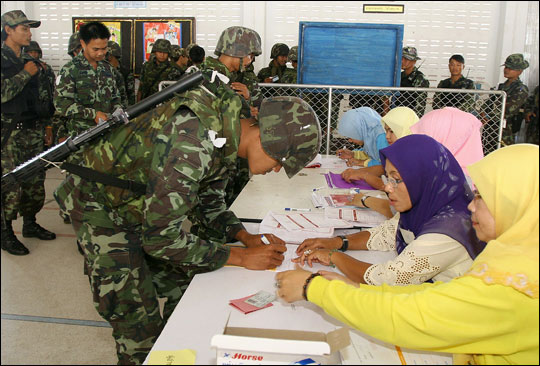 Backers of an elected Thai government that was thrown out by a military coup last year may surge back into office Sunday on a wave of strong voter turnout.

The election in Thailand will be the first since the military seized power in September of 2006.

And even though the election is being held under the terms of a new military-backed constitution, the result may not be what the ruling generals were hoping for.

The coup threw out the government of Prime Minister Thaksin Shinawatra, who was first elected in 2001 and re-elected by a strong margin in 2005. Opponents of Thaksin accused the billionaire businessman of corruption, nepotism, dictatorial rule and human-rights abuses. The allegations included injuring the dignity of Thailand's monarchy, and King Bhumibol Adulyadej supported the coup leaders.

Thaksin's supporters say he built up the economy for Thailand's poor by offering micro-loans to small businesspeople and low-interest loans to farmers. He also pushed through a low-cost healthcare program.

The military chiefs staged their takeover when Thaksin was at a United Nations meeting in New York. They revoked his passport, so he couldn't return, and had a court dissolve his political party, Thai Rak Thai ("Thais Love Thais"). More than 100 of the party's leaders, including Thaksin, were banned from taking part in politics for five years. The junta also pushed through a constitution that gives the military much broader powers to intervene in Thailand's government.

Many of Thaksin's followers simply moved to another group, the People's Power Party, which shares most of the same goals as Thai Rak Thai. PPP candidates frequently invoke Thaksin's name when they campaign and promise a return to his policies if they win. . Recent polls have shown that the PPP is likely to make a strong showing, but unlikely to win a majority in parliament. That could set off a competition with another major party over which can form a coalition government.

Thaksin, who began his career as a policeman, amassed one of the biggest fortunes in Southeast Asia in the computer and cellular phone businesses.

Some of the conflict of interest allegations against him stem from his family's sale of shares in Shin Corp., the telecommunications conglomerate that Thaksin founded. The $1.88 billion transaction was especially profitable to the sellers, because of a loophole making it exempt from capital gains taxes. During his exile in England, Thaksin amused himself by buying the professional soccer club Manchester City, and by spending millions of pounds to attract first-rate players.

An election victory by Thaksin's allies is by no means assured. The New York-based group Human Rights Watch has accused Thailand's military rulers of interfering in the election process. The group cites a recently disclosed internal Army memo that outlines a plan to disrupt the election and discredit Thaksin's supporters. Human Rights Watch also noted that martial law is still in effect in many Thai provinces where Thaksin has strong support, giving the military the ability to ban political gatherings and arrest people without charges.

The new Army chief has promised that the military will not interfere if Thaksin's allies win, but the military made similar promises right up until it staged last year's coup.