Accessibility links
Our Cell Phones, Ourselves Americans spend, on average, seven hours a month talking on their cell phones, but that figure doesn't capture how much the cell phone has become a part of our lives. It is, as one researcher put it, "a second skin"-- itchy at times, and prone to blemishes, but something that increasingly, we can't imagine living without.

Our Cell Phones, Ourselves

Our Cell Phones, Ourselves 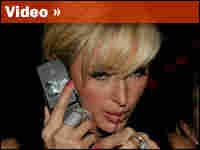 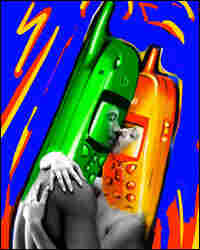 Cell phones have become, as one researcher put it, "a second skin." Creasource/Corbis hide caption

Click enlarge to chart the growth of the cell phone. hide caption

Who Needs a Land Line Anyway?

Increasingly, the cell phone is displacing the traditional phone. Already, there are more cell phones in the U.S. than land line phones (250 million verses 170 million); 2007 will likely be the first year in which Americans spend more on cell phone calls than land line ones.

In fact, 12.8 percent of American households have only a cell phone—one in four for those aged 18 to 34, according to CTIA, a wireless industry trade group.

This trend creates problems for groups like the Centers of Disease Control, which conducts health-risk surveys and can't reach people without landline telephones.

Americans spend, on average, seven hours a month talking on their cell phones, but that figure doesn't capture how much the cell phone has become a part of our lives. It is, as one researcher put it, "a second skin"— itchy at times and prone to blemishes but something that increasingly we can't imagine living without.

Quite simply, the cell phone has altered what it means to make a phone call.

"You call a person and not a place, and that makes all the difference," says Richard Ling, a senior researcher with Telenor, a Norwegian telecommunications firm. The cell phone, untethered to a fixed location, enables "micro-coordination," he says.

In other words, we can make plans on the fly. What used to be a firm appointment is now something softer and constantly open to negotiation. Researchers have found that people with cell phones are more likely to be late for appointments than people without—a phenomenon they are just beginning to understand. If we can always call to say we're running late, then we are never actually late. We're simply renegotiating our estimated arrival time.

More than that, cell phones are changing the very way we think about time and punctuality, argues Barry Wellman, a professor at the University of Toronto and a leading researcher on cell phones and behavior.

"Tardiness previously had a moral dimension to it. To be on time was to be virtuous," he says. "Cell phones allow a more effective fit between schedules," he says; they have chipped away at the virtues of punctuality. And while cell phones may increases tardiness, they "decrease stress," Wellman claims.

The Devil and the Cell Phone

At least for some of us. Cell phones "magnify a pre-existing power arrangement," says Wellman, and that can make life uncomfortable for those on the lower rungs of the office ladder. This fact was highlighted in the movie The Devil Wears Prada, where a tyrannical fashion magazine editor, (played by Meryl Streep) constantly badgered her personal assistant (played by Anne Hathaway) by calling her at all times, day and night. It was a case of cellular torture until—at the end of the movie—the assistant chucks the phone into a fountain, thus liberating herself.

In other ways, too, cell phones are changing how we relate to one another. Researchers have found that cell phones "tighten our inner social sphere," as Ling puts it. We're able to stay in touch with friends and family more regularly (a little too regularly for some of us.) About half of all cell phone calls are made to just three or four numbers, according to James Katz, a professor at Rutgers University who studies the social impact of cell phones.

On the other hand, cell phones loosen the bonds with those outside our inner circle. Standing at a bus stop, for instance, we're less likely to strike up a conversation with a stranger. Instead, we reach for our cell phone and call a friend or colleague. Or, says Katz, consider professional conferences. They used to provide a chance to mingle, to make new connections. But now during coffee breaks "everyone rushes to their cell phones, foreclosing the opportunities in the here and now."

Richard Ling finds that tendency worrisome. "If you're talking with family and friends, you're just hearing the same thing over and over. It's through these weak ties, these random encounters, that you hear the new joke, hear about the new job, meet your new girlfriend."

Much of the chatter on the cellular networks constitutes what anthropologists call "grooming talk." The conversations are not meant to convey vital information, but rather, to make a connection or commiserate or salve loneliness. Ironically, given the cell phone's ability to collapse distances, to render physical location irrelevant, one of the most common questions asked during a cell phone conversation is: "Where are you?"

Another reason people use cell phones is for security, or at least the perception of it. In one survey, more than 90 percent of cell phone users said cell phones make them feel safer. (That and convenience are the most frequently cited reasons for owning a cell phone.) A related phenomenon, says Katz, is "fake-talking." That's where, for example, a woman riding in a taxi late at night pretends to talk on the phone so the driver knows she's in contact with someone.

Having a cell phone means never being alone. That is not necessarily a good thing, says Leysia Palen, a professor at the University of Colorado.

"One of my big concerns about cell phones is we have a generation of people coming up who are not well practiced at being alone. They don't know how to be alone, and that is really important," she says. That's why some have labeled cell phones "pacifiers for adults" or "electronic tethers."

Another potential concern: Cell phones are blurring the line between the public and the private. People who, previously, would never consider sharing their private lives with strangers now have no compunction about talking, very loudly, about their lab results or their dispute with their landlord or the really hot date they had last night.

The cell phone, some worry, is encouraging rudeness and eroding social graces. In that sense, this new technology is nothing new. We humans have always had misgivings about new technology. When the train replaced the horse and carriage, 19th-century critics worried that the new, high-speed juggernaut signaled the end of leisurely, contemplative travel. The advent of the telephone (land lines, not cellular) prompted Mark Twin to pen this Christmas greeting in The Boston Daily Globe in 1890:

It is my heart-warm and world-embracing Christmas hope and aspiration that all of us, the high, the low, the rich, the poor, the admired, the despised, the loved, the hated, the civilized, the savage (every man and brother of us all throughout the whole earth), may eventually be gathered together in a heaven of everlasting rest and peace and bliss, except the inventor of the telephone.

Like them or not, cell phones are fast evolving from luxury to necessity. Opting out of the cell-phone universe is becoming less of a viable option. "You're a problem for other people if you don't have a mobile phone," says Katz.

Texting: What to Consider When Sending Secrets Dec. 17, 2007