Accessibility links
A 'Silent Night' That Brought Healing On Christmas Eve, 1968, Steve Banko was lying in a military hospital after being wounded in a battle in Vietnam — and he wasn't sure that he wanted to live. But the sounds of Christmas carols floating over the hospital's PA system helped change his mind.

A 'Silent Night' That Brought Healing 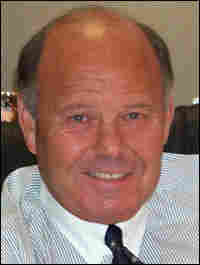 Steve Banko did two combat tours in Vietnam, earning the Silver Star and four Purple Hearts. In 1996, he received the Terry Anderson Courage to Comeback Award for his struggles with alcoholism and depression. Banko is a 30-year civil servant in Buffalo, N.Y. Photo Courtesy of Steve Banko hide caption

I've been moved by the magic of Christmas music since the nuns in grammar school etched the words of the carols into my brain. That magic persists despite the memory of our pre-pubescent male voices that sounded more like a pond of bullfrogs than the Vienna Boys Choir. The music rose above us. Even our childhood rivalries and petty differences were no match for the spell of that music. I believe that Christmas music can touch the spirit.

Those nuns taught me the music and the lyrics, but I would learn of the real magic about 10 years later.

On Christmas Eve 1968, I was a patient in a military hospital in Yokota, Japan. My leg had been shattered by a couple of machine gun bullets in a five-hour battle in Vietnam. My body was full of shrapnel and my hands had been badly burned. For three weeks, Army doctors in Vietnam struggled to save my leg. They sent me to Japan on that Christmas Eve to give a new team of surgeons a chance to work their magic.

And I was in desperate need of magic. Somewhere it was Christmas but it didn't feel like it to me — at least not until I heard the music piped through the PA system.

A chorus sang of "peace on earth and mercy mild" and promised "God and sinners reconciled." Another voice called to "let us all with one accord sing praises to our heavenly Lord" and another, to "sleep in heavenly peace" but heaven and peace seemed so distant to me.

My misery was interrupted by a low moan coming from the next bed. All I could see was a white cast shaped like a body; cutouts for his eyes, nose and mouth were the only breaks in the cast. Even as the music inched me toward comfort, the reality of pain anchored me in the present. But looking at my neighbor enclosed in God-knows-what-kind-of-pain, mine didn't seem nearly as important.

The soft strains of "Silent Night" were filling the air of the ward when the nurses made final rounds with our medications. When my nurse approached, I asked her to push my bed closer to the man in the cast. I reached out and took my new friend's hand as the carol told us "all is calm, all is bright."

I believe there is magic in Christmas and the music that celebrates it, because it brings us closer together and closer to our own hearts.