Accessibility links
U.S. Soldiers Let Their Music Tell the Story Some U.S. soldiers have turned to music to communicate their experiences to friends and family back home. As several compilations on the all-military To the Fallen record label prove, some of the songs are quite good.

Watch an archived live concert showcase for To The Fallen Records artists:

Watch a slideshow set to "Send My Love" by Cliff Hudson, produced by Semper Fi Sweethearts: 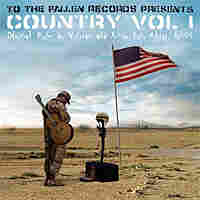 In addition to this country-music compilation, the all-military To the Fallen label has also issued rock and hip-hop albums. Courtesy of To the Fallen Records hide caption

toggle caption
Courtesy of To the Fallen Records 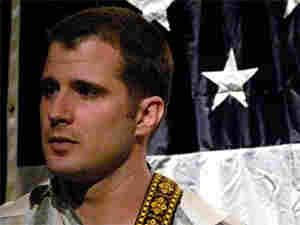 Cliff Hudson wrote the song "Send My Love" to his wife while stationed in Ramadi, Iraq. Courtesy of To The Fallen Records hide caption

toggle caption
Courtesy of To The Fallen Records

Cliff Hudson started playing guitar in college. He was passionate about playing, even after graduating and enlisting in the U.S. Marine Corps. While serving in Iraq in 2005, his father-in-law sent him the perfect care package.

"He sent me a Martin backpacking guitar, because he had heard somewhere that another guy had bagpipes, and he said, 'If that guy can have bagpipes, my son-in-law can have a guitar to take over there.'" Hudson says. "I didn't realize how much I had longed to play guitar, and to write music and do things like that, until I actually had the smell of the cedar and the feel of the six strings on my fingertips."

Hudson's guitar became a rallying point and source of much-needed distraction for his fellow soldiers.

"I'd sit there and we'd play stuff and just take requests," Hudson says, "and nine times out of 10, it turned into guys making up little songs to berate one another with and just sit there and have a little comical moment out of the stress of the day."

Nearly 160,000 American troops spent Christmas in Iraq. And they'll tell you: If you haven't been there, you can't understand what it's like.

But some of the soldiers have found a way to communicate their experiences to the folks back home — in music. And some of the music is very good.

Last year, an album of hip-hop by U.S. service members was released on To the Fallen Records. This month, rock and country compilations went on sale.

Josh Revak, another soldier, turned to music for a different kind of therapy: He used it to mourn. Just two weeks into his first deployment, one of his good friends, Timothy Hayslett, was killed by a roadside bomb.

"It was just a blow, a hard blow," Revak says. "The guitar has always been there when nobody else was. It was all I knew how to do — it was almost like a reflex."

Revak wrote a song for his friend and played it at his memorial. Everyone was touched — so much that Revak was asked to play at the next memorial, and the next one.

"It wasn't just another Army event where you just sit at attention and choke your way through it," Revak says. "It was more like an outlet, like I think it's supposed to be."

Many artists on the To the Fallen label say the power of their music had little to do with skill. Their guiding principle is a simple one.

Revak says the approach can help people understand what it's like on the front lines.

"People want to relate," he says. "They want to empathize. They don't know what to do when they see soldiers who have experienced these horrible things. Music has been huge for people; it tells them a story where a conversation wouldn't. It speaks from the heart."