Accessibility links
Bach's 'Christmas Oratorio,' from Carnegie Hall NPR and WNYC offer an encore presentation of the acclaimed Collegiate Chorale and soloists, recorded live in concert, performing one of the most beloved works of Johann Sebastian Bach. 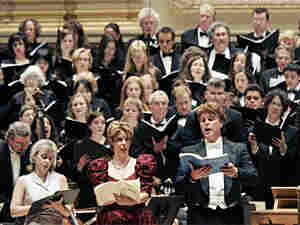 From Carnegie Hall in New York City, NPR and WNYC present selections from one of the most joyful and sumptuous works of Johann Sebastian Bach, recorded live in concert.

The Collegiate Chorale performs three of six sacred cantatas, each depicting a different scene from Christ's birth, and known collectively as the "Weihnachts-Oratorium," or Christmas Oratorio. The group also rounds out the performance with some traditional holiday favorites.