Accessibility links
'Young Folks' Singer Gets Taken by Trees Swedish pop singer Victoria Bergsman has a voice heard by millions around the world: That was her singing on the massive hit "Young Folks," by the indie-pop band Peter, Bjorn and John. But fewer people heard that she also put out a solo record in 2007. 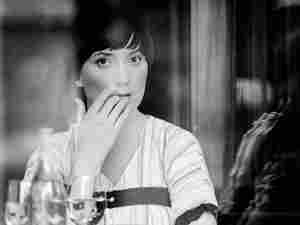 Victoria Bergsman, who once sang for The Concretes, is now performing and recording as Taken by Trees. Helena Blomqvist hide caption

Swedish pop singer Victoria Bergsman has a voice heard by millions around the world, but hardly anyone knows her name. Unless you've been deliberately avoiding popular music for the last two years, you've probably heard her voice — not necessarily on her own record, but on the massive hit "Young Folks," by the Swedish indie-pop band Peter, Bjorn and John.

The owner of that voice is quiet and almost painfully modest. "I enjoy singing," Bergsman says. "But I don't know if I could say I'm a singer. From the start, I really loved singing. Though I was very shy and I still am. I just felt that my voice wanted to express something. So I went for it."

Bergsman fronted The Concretes for more than 10 years. She started the band with two friends in Stockholm, Sweden, where she grew up. She says she wound up being the singer because no one else wanted to. Bergsman says the band's first show was a disaster: "Everything broke during the sound check. No one of our friends said anything afterwards. They had left."

The Concretes got better as it grew into an eight-piece band. It released half a dozen well-received albums and EPs. The group's breakthrough hit, "Say Something New," even appeared in a Target commercial. But playing live never got much easier for Bergsman. To this day, she suffers from stage fright.

In May 2006, in the middle of The Concretes' American tour, Bergsman collapsed from exhaustion. A few months later, she announced she was leaving the band. Bergsman won't talk about why she quit, but she gives the impression that there were reasons other than her stage fright. By last winter, she was back in a recording studio in Stockholm, working on her solo album. She released it this year under the name Taken By Trees.

"The album sounds like a quiet forest in winter," says Sarah Tomlinson, a music critic for the Boston Globe and Los Angeles Times. "You feel like it's a hushed mood. She's telling these stories, or singing these lullabies, and you sort of have to draw in close to listen. That's what makes it so appealing."

Bergsman says she deliberately left room for interpretation in the nine songs she wrote for the album. She talks about purposely giving the songs "space and air, open space. Leaving a lot of space for the imagination, for the listener." Bergsman's voice and lyrics are squarely in the foreground. There are no electric guitars at all, and no rock 'n' roll drum kit, because, Bergsman says, "It overtakes too much of the melody and things. It's more dignity in a big lonely drum than a drum kit."

Bjorn Yttling, the bass player for Peter, Bjorn and John, co-produced her album. "She wanted it to be more minimalistic," he says. "Often that's my job when recording, because everyone wants to play on 12 strings at the same time, and overdub, and you have to cut down on everything and clean up. But this time, it was more like me and her to tell the people on it that they should use only one note at a time."

Yttling says they recorded quickly, laying down the basic tracks and overdubs in just a week. One track is a first take of Victoria Bergsman singing and playing a ukulele alone in the studio.

Though Bergsman's native language is Swedish, she prefers to write songs in English. "Swedish is hard to rhyme," she says. "It's too scary also to write in Swedish. It becomes too true or something."

But Victoria Bergsman is slowly starting to face her fears. She's already played a few shows in Europe. And she's planning a handful in the U.S. next year with the band she's put together. "They really influence me and inspire me to try and be more brave," Bergsman says.

Maybe one day, she'll even decide to call herself a singer.