Accessibility links
Post Office's 'Operation Santa' Kicks into Overdrive For nearly a century, the U.S. Postal Service has helped Santa to grant the yuletide wishes of needy children. At an "Operation Santa" center in California, volunteers patiently unfold letters and make a list of families for Santa's elves to visit. 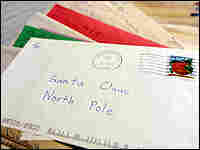 This time of the year the U.S Postal Service will get more than 1 million letters without a zip code and addressed to one place: Santa Claus, North Pole.

And for nearly a century, the postal service has helped Santa to grant the yuletide wishes of needy children. These days it's called Operation Santa.

By Christmas Eve, thousands of letters with bold penmanship in crayon, felt pen and number two pencil will arrive at one U.S. postal distribution center in Southern California. And they all begin, "Dear Santa."

"There are quite a few this year writing for warm clothes, simple blankets, beds things of that nature, and, of course, they're writing to Santa so they're asking for the big items, too, that every child has as far as they're concerned," Crane says.

Helping to sort out the three-page wish lists for Nintendo games and iPhones from the more deserving and needy children are community volunteers.

Watkins reads from one of the letters: "Dear Santa Claus, This year my family was good. I hope you can find my address because my mom says sometimes you don't make it to the house because you can't find the address. I love you so much…"

Josh Heller reads from another: "I really don't want nothing except seeing my mom happy for once in her life…It's really sad to see my mom carry bags and walk so much. I know you understand Santa. You're my only hope. "

Letters like these are put in folders so people like Karen and Tom Scott can choose a family to help.

"We're going over some of the letters to see what the children want and see how Santa can help," Karen Scott says.

By the time they were finished reading the letters, they had chosen two families to adopt.

"We'll be shopping and wrapping and Santa's helpers," Scott says.

And then they'll personally deliver the presents on Christmas Eve day.

Rick Hernandez came in to adopt one family and left with four letters, including this one: "My name is Samantha. I'm nine years old… I don't think we'll be getting Christmas this year."

When I caught up with Hernandez a couple days later, he and his girlfriend, in Santa hats, were making their delivery to Samantha's house.

Samantha and her sister, Bianca, were speechless and wide-eyed. And within a matter of seconds their arms were stacked high with presents.

Looking back, the girls were steadfast and smiling and their mother was crying.

"Every kid should have that experience, every kid," says Rick Hernandez.