Accessibility links
Overdose Rescue Kits Save Lives Every year, overdoses of heroin and opiates, such as Oxycontin, kill more drug users than AIDS, hepatitis or homicide. Now, public health workers are preventing thousands of deaths by giving drug users themselves the tools to save a life. 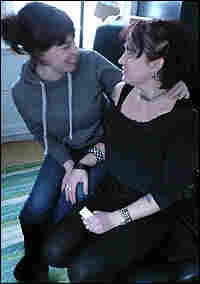 Eliza Wheeler, left, a health educator with the group Cambridge Cares About AIDS, is teaching a client named Elissa how to rescue her friends from a fatal overdose. Richard Knox, NPR hide caption

A chart comparing the number of people trained to use overdose rescue kits with the actual number of drug overdoses reversed by using the kits. Alice Kreit, NPR hide caption

Every year, overdoses of heroin and opiates, such as Oxycontin, kill more drug users than AIDS, hepatitis or homicide.

And the number of overdoses has gone up dramatically over the past decade.

But now, public health workers from New York to Los Angeles, North Carolina to New Mexico, are preventing thousands of deaths by giving $9.50 rescue kits to drug users. The kits turn drug users into first responders by giving them the tools to save a life.

One of the new rescue operations is located off a side street behind St. Peter's Episcopal Church in Cambridge, Mass. Clients enter through an innocuous-looking door and climb a flight of wooden stairs to the Cambridge Cares About AIDS program for harm reduction.

The group says its mission is to provide prevention, education, advocacy and support services to the economically and socially disadvantaged.

At CCAA, drug users can obtain condoms, sterile needles, syringes and other resources to reduce their vulnerability to disease and death. Health educators also cajole their clients to undergo HIV and hepatitis testing, urge them not to share needles, and find them slots in detoxification programs and methadone treatment.

Drug Used as a Nasal Spray

On one recent wintry morning, health educator Eliza Wheeler teaches a 34-year-old client named Elissa how to rescue her friends from a fatal overdose.

"All right, Elissa," Wheeler says in a getting-down-to-business manner. "The first thing I'm going to do is ask a series of questions about your current drug use. So, we're going to talk about just the last 30 days."

Elissa has been on methadone for six years, but she confesses that she used heroin a couple of days in the previous month because she was under a lot of stress.

Like most long-term heroin users, Elissa has had scary experiences with overdoses – her own and others'. Once, her partner became unresponsive after taking a mixture of heroin, benzodiazepine pills and alcohol, she says.

"He was not breathing, which is why I called the ambulance," she says. "But I managed to wake him up before they came, and they didn't take him away. He went out and convinced them he was OK."

Many times, drug users and their friends don't call 911, which is why overdoses are so often fatal. They're afraid the police might come, and they could get arrested — or lose their housing or custody of their children.

Wheeler runs through the signs of heroin overdose for Elissa.

"There are some clear signs, like people turning blue," Wheeler says. "Sometimes, there's like a gurgling sound and nonresponsiveness, of course. And there are some less clear signs, like people being in kind of a heavy nod — kind of being really sedated — not breathing very often. We usually say 12 breaths a minute is key. So, if people are breathing less than that, it's time to really be concerned."

Wheeler says stimulation — rubbing hard on the breastbone or the upper lip — can sometimes bring an overdose victim back to consciousness. If that doesn't work, call 911 and start blowing air into the person's lungs, a modified form of CPR called "rescue breathing."

That's when it's time to open up the overdose rescue kit, Wheeler says, ripping open a plastic bag and taking out a small box containing a vial of medicine.

"This is what the box looks like," she says. "Attached to the box is a little apparatus that makes it into a spray. It's just a nasal spray. There's no injection."

"That's so wonderful!" Elissa says, looking visibly relieved. "I had thought it was a shot."

The nasal spray is a drug called naloxone, or Narcan. It blocks the brain receptors that heroin activates, instantly reversing an overdose.

Doctors and emergency medical technicians have used Narcan for years in hospitals and ambulances. But it doesn't require much training because it's impossible to overdose on Narcan.

The Cambridge program began putting Narcan kits into drug users' hands in August. Since then, the kits have been used to reverse seven overdoses.

New data compiled for NPR by researcher Alex Kral of the consulting firm RTI International show that more than 2,600 overdoses have been reversed in 16 programs operating across the nation.

Kral estimates that is at least 75 percent of all the reversals that have occurred so far among several dozen U.S. programs, many of which are new.

John Gatto, executive director of the Cambridge program, says such dramatic results are unusual in the world of substance abuse treatment and prevention.

"In the work that we do, oftentimes the results are very intangible," Gatto says. "This is amazing to be involved in something that literally can save people's lives. Why wouldn't we do it?"

But Dr. Bertha Madras, deputy director of the White House Office on National Drug Control Policy, opposes the use of Narcan in overdose-rescue programs.

"First of all, I don't agree with giving an opioid antidote to non-medical professionals. That's No. 1," she says. "I just don't think that's good public health policy."

Madras says the rescue programs might take away the drug user's motivation to get into detoxification and drug treatment.

"Sometimes having an overdose, being in an emergency room, having that contact with a health care professional is enough to make a person snap into the reality of the situation and snap into having someone give them services," Madras says.

There is not much research on the effect of Narcan kits on drug abusers' behavior, but one small study suggests that overdose-rescue programs reduce heroin use and get some people into treatment.

Karen Seal, an author of the study, says the study showed rescue programs have a tremendous impact.

"It was one of those great studies where we just all walked away and said, 'Whoa! This is terrific!'" says Seal, of the University of California, San Francisco. "I mean, by our sheer interaction with these folks around these life-saving behaviors, we're actually creating some real positive change here."

And health educator Wheeler says putting overdose-rescue kits in the hands of drug users sends them a positive message.

"There is a real potential culture change among drug users because of Narcan," she says. "Because, from my experience, I feel like drug users internalize a lot of stigma that's out in the world about them. They come to believe that dying is just part of this life that they've chosen."

Wheeler says it doesn't have to be that way.

Despite the rescue program's critics, it has not generated the kind of controversy that surrounded needle-exchange programs. Those programs seek to prevent drug users from getting HIV or hepatitis by sharing dirty needles and syringes.

So far, Narcan rescue programs have sprung up in big cities and rural areas around the country with little or no opposition.