Accessibility links
Greenland Glacier Studied for Insight into Warming Scientists are studying the Greenland glacier to see how quickly it might melt in a warming world. A team camping near a lake on the surface of the glacier cobbled together an impromptu instrument to try to measure how quickly water was rushing out of the lake to the ocean.

Scientists are studying the Greenland glacier to see how quickly it might melt in a warming world. Lakes form on the surface of the glacier in midsummer, and that water pours down through the ice, to the bedrock below — and ultimately to the ocean.

Scientists camping near one of those lakes last summer cobbled together an impromptu instrument to try to measure how quickly water was rushing out of the lake. 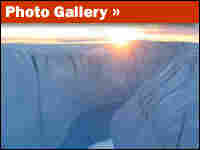 Journey through the melting landscape of Greenland. 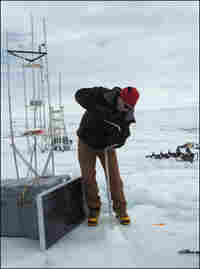 Ian Joughin from the University of Washington uses an ice drill to sink a pole into the surface. The pole will anchor his equipment, which includes an instrument that measures ice-quakes and another that tracks the movement of the ice. Richard Harris, NPR hide caption 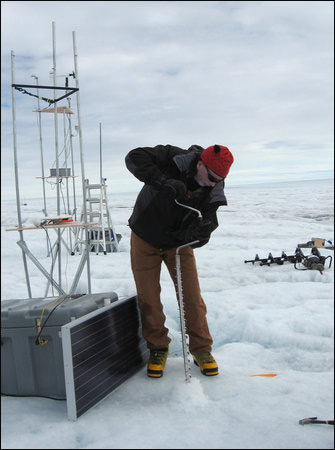 Ian Joughin from the University of Washington uses an ice drill to sink a pole into the surface. The pole will anchor his equipment, which includes an instrument that measures ice-quakes and another that tracks the movement of the ice.

If the Greenland ice cap were to melt tomorrow, the sea level around the world would rise by more than 20 feet.

Scientists are now trying to figure out how quickly we could be in trouble.

Eighty percent of Greenland is covered with one enormous ice sheet, and it oozes off the edges of the island as so-called outlet glaciers. Among the biggest is the Jakobshavn glacier, on the island's west coast.

It's a sight to behold. Huge mountains of ice — icebergs — clog a narrow fjord and slowly but surely push their way out toward the open ocean.

Scientist Ian Joughin says that in the past few years, Jakobshavn's speed has doubled.

Joughin adds that Jakobshavn is by no means alone.

"Many of the glaciers, especially along the southeast coast of Greenland, are doing very similar things, and what's kind of scary is that they all started doing them roughly at the same time," he says.

That speed-up was triggered by a spell of unusually warm weather — and that has raised alarms about Greenland. Before the warm-up and speed-up, scientists had thought Greenland's ice would be around for at least a thousand years. Now they are not so sure.

Joughin has come to Greenland with a colleague, Sarah Das, to figure out what is going on under the ice that is contributing to its slide toward the sea. Das says that's a challenge.

"It's not like you can go up and sort of poke your head under the ice and see what's happening. It's under water in many places, completely inaccessible," she says.

The story of sliding ice starts dozens of miles inland. In summer, some of the ice there melts and forms lakes. Most of those lakes drain thorough mysterious passages called moulins, which carry the water to the bedrock below the ice. Once the water gets under the ice, it lubricates the ice sheet, and the whole sheet flows faster toward the sea.

That's what Das and Joughin have come to Greenland to study, so they fly by helicopter from the coast to the island's expansive ice cap.

Measuring the Slide to the Sea

About 50 miles from the coast, the ice appears to be riddled with holes like Swiss cheese, making the helicopter pilot nervous. But Joughin reassures him that the holes are only round puddles about a foot deep. The ice itself is a solid block, half a mile thick.

The helicopter lands near an automated research station Joughin set up the previous summer. The scientific instruments there have been recording weather, ice-quakes and more gradual movements of the ice.

The station has to be re-anchored into the ice because Greenland's entire ice sheet is moving. Joughin, from the University of Washington, pulls out his GPS unit and finds that the region has slid more than 100 yards closer to the ocean during the past year.

He also measures a length of fishing line he had sunk straight down into the ice the previous summer to see how much of the ice has melted away. A lot of the line he had buried is lying on the surface.

"Wow," he says. "It's a meter and a half of melt since last year. Almost five feet."

Greenland's ice sheet deforms constantly, like pancake batter flowing on a griddle. Each year, more snow piles up in the middle, and each year, more ice slides off into the sea or melts away. At the moment, Greenland's melt water increases global sea level by about a quarter of an inch per decade. If that melt increases as the world warms, a melting Greenland will eventually eat away the shorelines of the world.

Das, who is from the Woods Hole Oceanographic Institution, and Joughin are trying to figure out how quickly that could happen. They pick their way down to the shore of the lake. They side-step water-filled pockets and clamber over hummocks of ice. There are rushing streams everywhere.

A torrent brings meltwater down from the surrounding hills of ice to the startlingly blue lake. That inflow is keeping the lake full, but Das says it's only temporary.

"Lakes serve as a reservoir. They collect probably a large fraction in these areas of all the surface meltwater and pool them all together as you see in this really vast and deep, blue lake that we're standing by," she says.

When the reservoir drains, the water will flow to the bottom of the ice sheet, where it will essentially grease the underside and make the entire region slide faster toward the coast.

Hunting for a Moulin

The mystery is how the water makes its way from the lake to the bedrock below. Das and Joughin have done some reconnaissance that suggests the water is draining out from the far end of the lake, more than a mile away.

There, the water cuts down and forms a stream about 20 feet wide, then heads down a series of incredibly fast rapids. It ends up in a hidden channel that snakes around and goes down ... somewhere. The scientists follow its path, moving uphill, as the stream cuts a deeper and deeper canyon below.

They find that the deep channel contains a roaring waterfall, descending thousands of feet into the ice. The river seems to come to a stop.

"My guess is that [the water is] going to the bottom of the ice sheet. Right before it disappears from view, it takes some huge jumps down, and as far as we've dared to creep to the edge and look down, you see it cascading almost 45 degrees or even steeper downwards into the ice with this thundering roar," Das says.

This is the long-sought moulin, the link between the melting ice on the surface and the invisible world below.

"It is quite an exciting discovery," Das says.

And there are hundreds more like it across Greenland, all speeding the flow of ice toward the sea.