Accessibility links
'Persepolis' A young, naturally rebellious Iranian girl's life is upended by the fall of the Shah and the rise of Islamic fundamentalism in this poignant, animated, coming-of-age story based on a bestselling graphic novel. (Recommended) 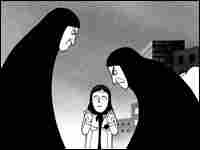 Based on the bestselling graphic novel, Persepolis is the story of a spunky, Iranian girl whose life is upended by the rise of Islamic fundamentalism. Above, Marjane outwits two guardians of the revolution who are harassing her for dressing "punk." Marjane Satrapi/Sony Pictures Classics Inc. hide caption

A young, naturally rebellious Iranian girl's life is upended by the fall of the Shah and the rise of Islamic fundamentalism in this poignant, animated coming-of-age story. Based on the four-volume bestselling graphic novel by Marjane Satrapi, the film tells of a spunky, independent kid who's used to wearing sneakers and playing ball with boys in 1970s Iran, when overnight, everything about her society changes.

There's excitement in her family at first, as they assume that the end of a hated dictatorship will lead to a more just and open society, but the religious government that replaces the Shah proves restrictive in different ways. Suddenly, Marjane must wear heavy robes, cover her hair and enter school by different doors than the boys do.

Intellectual dissent is not tolerated, and Marjane's relatives are imperiled for a whole new set of reasons. Her parents send her to study in Europe, and at first the freedom she finds there is liberating. But she misses her country and the life she had there with her family, and returns to find the place utterly changed and far less inviting.

The film's nuanced view of social issues is complemented by lovely black-and-white animation work that blends Islamic motifs into a sort of Yellow Submarine-ish world, where Marjane fantasizes conversations with God and Karl Marx, and where imagination runs free.