Accessibility links
A Tribute to James Brown On the first anniversary of the death of soul singer James Brown, we learn about a recent unprecedented memorial celebration called Function at Princeton Junction. This scholarly gathering of writers, musicians, and critics took a look at and a listen to the music of James Brown. Music critic Robert Christgau was part of the conference and has these thoughts on the Godfather of Soul.

Listen
A Tribute to James Brown

On the first anniversary of the death of soul singer James Brown, we learn about a recent unprecedented memorial celebration called Function at Princeton Junction. This scholarly gathering of writers, musicians, and critics took a look at and a listen to the music of James Brown. Music critic Robert Christgau was part of the conference and has these thoughts on the Godfather of Soul. 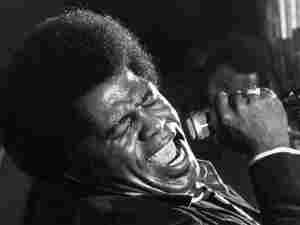 James Brown died on Christmas Day 2006. And now, a year later, people are gathering and remembering.

Our music critic, Robert Christgau tells about once such event.

Mr. ROBERT CHRISTGAU (Contributing Editor, Rolling Stone): In late November, I took part in an unprecedented memorial celebration, all that lacked, as several attendees noted, was a dance party. It was the function at Princeton Junction where Princeton University's Center for African American Studies hosted a first-ever academic conference called Ain't That a Groove: The Genius of James Brown.

(Soundbite of song "Ain't That Groove")

Mr. CHRISTGAU: The mostly African-American scholars, critics and musicians at conference assumed that our proper subject was the funk - the musical revolution that Mr. Brown as everyone called him, launched with his 1965 single, "Papa's Got a Brand New Bag." As Mr. Brown once described it, I had discovered that my strength was not in the horns, it was in the rhythms. I was hearing everything even the guitars like they were drums.

In the selection I'll play now, hear how the guitar states the beat after James Brown sings new breed babe, and follow it from there. Notice how percussed(ph) are horns are as well, and also the voice.

(Soundbite of song "Papa's Got A Brand New Bag")

Mr. BROWN: (Singing) Come here sister, papa's in the swing. He ain't too hip about that new breed babe. He ain't no drag, papa's got a brand new bag. Come here mama…

Mr. CHRISTGAU: "Papa's Got a Brand New Bag" began a decade long progression of ever more elaborate rhythmic constructions, which had a way of erupting from each other. It shows that we're always changing as Brown let his band with his knees.

For most of the speakers, that elaboration was the musical counterpart of Afro-America's proud, complex, even separatist re-conception of blackness, and rendered him as supreme in his era, as Louis Armstrong was in his. Wrap-up speaker Cornel West went so far as to compare him to Europeans(ph), and Thomas Hardy.

At the very least, Brown was the crucial source of the rhythmic method that now pervades popular music worldwide. Once musicologist offered a detailed account with notation of how James Brown funkified(ph) the regular cadences of Stokely Carmichael's "Black Power" chant.

Mr. BROWN: (Singing) I got to ask you (unintelligible).

Mr. CHRISTGAU: Listening to Mr. Brown from my own talk, watching concert footage, hearing speaker after speaker detailed the precision and responsiveness of his band as the live show evolved, I began to wonder whether his music wasn't un-duplicatable.

Sure James Brown samples powered more hip-hop than anyone can remember. Sure he made George Clinton and Michael Jackson and Prince and Justin Timberlake and thousands of studio musicians possible. But cover him? How? Only then at the final dinner, I was approached by Chuck D. of Public Enemy, who had dropped by on his way north from Atlanta. He slipped me a James Brown tribute album that Slam Jams label had just put out. "Trib to J.B." it's called.

(Soundbite of song from album "Trib To J.B.")

Mr. CHRISTGAU: James Brown is Chuck D.'s hero. He's shocked that he and M.C. Hammer were the only named hip-hoppers to attend the funeral. But the tribute album changes Brown up a little. Adding scratches here, a political rap there, while doing the intricacies of the music of the crowd. But not as proud as Chuck D. is to tell the world about Mr. Brown.

SIEGEL: Our critic is Robert Christgau. He is a contributing editor for Rolling Stone.

SIEGEL: You're listening to ALL THINGS CONSIDERED from NPR News.