Accessibility links
Subprime Crisis Hits Holidays The subprime mortgage crisis is affecting people across the country, in all walks of life. This week, we have several stories of people at risk of losing their homes because they can't keep up with rising mortgage rates.

The subprime mortgage crisis is affecting people across the country, in all walks of life. This week we have several stories of people at risk of losing their homes.

One woman in Philadelphia tells the story of her struggle to keep up with rising mortgage rates. 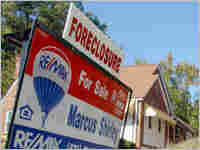 A for-sale sign on a lawn in Atlanta notes that the house is in foreclosure. AP/Gregory Smith hide caption 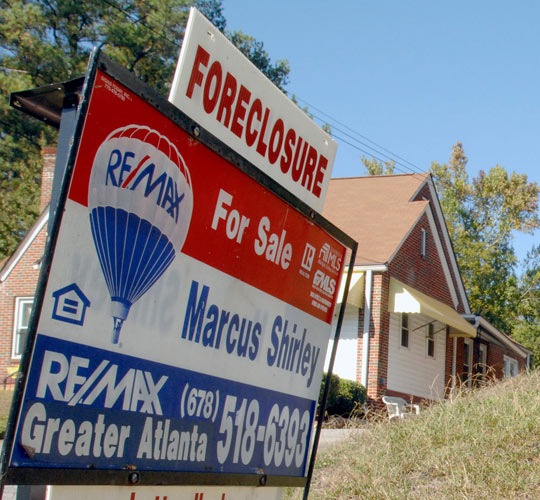 A for-sale sign on a lawn in Atlanta notes that the house is in foreclosure.

With the collapse of the housing market, many economists are warning that a recession has become more likely. Gone are the days when homeowners flush with rising equity buoyed the economy with confident spending.

Now entire neighborhoods are plagued by foreclosures, mortgage lenders are skittish and the real estate industry is shedding tens of thousands of jobs.

This time last year, the housing sector was looking shaky. But few had any idea what was coming. Hundreds of billions of dollars in losses on subprime loans sent shocks through credit markets around the world. Scores of mortgage companies went bankrupt. Many in the industry had massive layoffs.

While there are areas and neighborhoods that have weathered the crisis with little effect, home prices over the past year on average have been falling more broadly than they have since before World War II.

Not too long ago, foreclosures were considered a rare, unhappy event. Now entire cities are plagued by foreclosures — which are at their highest level since the Great Depression. At the same time, new home construction has fallen to the level it was at in 1991.

And those events are rippling through the nation's economy.

During the housing boom, a lot of people were pulling money out of their homes as if they were ATMs to do renovations and build additions. The construction business was booming. This year, with house prices falling, that has all changed.

"People are not spending as much money as they have in the past," Alves said. "If you look at our core products — roofing, siding — [they are] down about 30 percent."

Alves said he has been trying to make up the difference by taking on more small jobs. But he still has had to trim his workforce from 30 people down to about 20. Homebuilders, Realtors, banks, plumbing companies, door manufacturers and scores of others have laid off hundreds of thousands of people.

And the worst may not be behind us.

"The bottom has nowhere near been reached," said William Wheaton, an economist with MIT's Center for Real Estate.

Wheaton said there was a great deal of overbuilding, driven in part by speculators. The result, he said, is that there are now more than 1 million extra homes sitting on the market. That's even after home-building had been cut by 50 percent and massive layoffs.

Wheaton said for the market to recover, building needs to be cut back even more.

"We haven't seen construction levels like that at any time in the last 30 years," Wheaton said. "So, I am not optimistic we are anywhere near the bottom."

And then there is the whole foreclosure crisis. Over the past year, one Wall Street firm after another announced eye-popping billion-dollar losses on subprime mortgage investments.

In August, the global credit markets seized up, as investors around the world realized there were many securities floating around that no one was sure how to value.

"This summer was shocking," said Paul Willen, an economist with the Federal Reserve Bank of Boston. "Those days in August when there was bizarre stuff happening in interest rates... I mean, you'd look at the screen and you'd think, 'That must be a mistake.'"

Willen conducted a study on people in Massachusetts who bought homes with subprime loans; he found that nearly 20 percent of them ended up in foreclosure.

Subprime loans were designed for people with credit problems. But in recent years, borrowers and lenders got intoxicated by ever-rising home prices. Many people got loans for the full value of their house — and they couldn't really afford the high-interest payments.

With rising prices, they could refinance and pull more money out of the home. But then the music stopped, prices fell — and a lot of people didn't have a chair to sit down on.

"The role that subprime lending has in this crisis and the reason why it's very important right now is that it created a class of people that were extremely vulnerable" to disruptions on the housing market, Willen said.

On top of that, millions of people are in adjustable-rate loans that have big jumps in their monthly payments built in. Mark Zandi of Moody's Economy.com says when it's all added up, there will be 750,000 foreclosures in 2007.

Looking forward, he said, "I think we're in store for at least a million lost properties in '08."

"The average household size is a couple [to] three people," Zandi said, "so you're talking 3 million people actually lose their homes."

Of course some of those facing trouble are speculators; others bought houses with no money down.

But at least some of those facing foreclosures are people who've been in their homes for a long time and just didn't understand the loans they were getting into.

There are various programs and legislative proposals aimed at avoiding foreclosures. Managing the ongoing fall-out is sure to be a main challenge for the U.S. economy in 2008.