Accessibility links
Blogs Scoured for Book Deals Blogs can rocket ordinary people into sudden notoriety and fame as some book and talent agents trawl blogland to find the next big thing. Dawn Meehan, a stay-at-home mom, started blogging about the everyday rigors of family life and got thousands of readers and a book deal.

Blogs can rocket ordinary people into sudden notoriety and fame as some book and talent agents trawl blogland to find the next big thing. Dawn Meehan, a stay-at-home mom, started blogging about the everyday rigors of family life and got thousands of readers and a book deal. Kate Lee, a New York book agent, describes how she taps talent in the blogland. 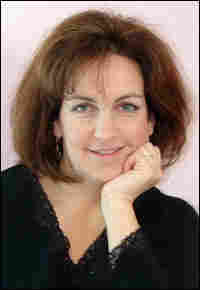 Dawn Meehan's blog, about her parenting experiences, is called Because I Said So. Courtesy Dawn Meehan hide caption

'Because I Said So'

Postings from the Blog

I Resign
House Devils and Street Angels
Just How Much Pineapple Did You Feed the Baby?

Dawn Meehan got what she calls "sort of famous" writing about her six kids, in a kind of Erma Bombeck-style blog about the rigors of everyday life with a large family. She recently accepted a two-book deal.

I started my blog in June 2007 in an effort to financially contribute to my family's income. I wrote stories about the silly, fun and frustrating things my kids do. I wrote about how they'd broken the couch, dyed a jar of pickles pink, and caught a squirrel by its tail. I averaged five visitors to my blog every day and made about one penny in advertising revenue a day.

Realizing I needed a way to get more readers over to my blog, I listed a pack of Pokemon cards for sale on eBay, accompanied by a story about grocery shopping with six kids.

The listing began: "You haven't lived until you've gone grocery shopping with six kids in tow. I would rather swim, covered in bait, through the English Channel, be a contestant on Fear Factor when they're having pig brains for lunch or do fourth grade math than to take my six kids to the grocery store. There comes a time, however, when you're peering into your fridge and thinking, 'Hmmm, what can I make with ketchup, Italian dressing, and half an onion?' that you decide you cannot avoid going to the grocery store any longer...."

I was hoping that people would like the story on eBay and ask me if I blogged, at which point I would answer, "Why yes! Yes, I do! Come over and check it out at mom2my6pack.blogspot.com!" I thought if I was really lucky, I'd be able to go from five hits a day on my blog to 50 hits a day. At the end of the auction, I received 94,000 hits in one day!

I now make a couple thousand dollars in advertising revenue each month,and I was recently offered a two-book deal with Guideposts Publishing in New York which I've accepted.

The best thing that has come out of this, however, is that I've been given the opportunity to encourage parents, especially stay-at-home moms. I can let parents know that they're not alone in the quest to find the source of that mysterious odor emanating from their child's room, the half-dozen missing socks, or the answer to the age-old question: Who started it?

I want to tell parents it's OK if there's marker on the walls. It's OK if you don't manage to get in the shower today. It's OK for kids to be kids. And most of all, it's OK to be an imperfect parent who loves her kids but sometimes finds it hard to make it through the day without curling up in a fetal position, rocking back and forth, and muttering in incoherent syllables.