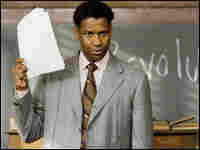 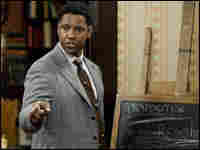 This holiday season will bring laughter, tears and cheering — or at least that's what Academy Award winner Denzel Washington is hoping with his new movie The Great Debaters, which opened in theatres Christmas Day. The project — now 10 years in the making — is a collaboration between producer Oprah Winfrey and Washington and stars a remarkable cast of movie icons and blossoming novices. The Great Debaters has been nominated for a Golden Globe for Best Motion Picture Drama and tells the story of Melvin B. Tolson, a black poet and professor at Wiley College Texas who inspires students at his all-black university to form the school's first debate team that goes on to beat Harvard University.

Washington says he has been itching for a change of pace in Hollywood and jumped on the opportunity to get into the director's chair after reading the manuscript for The Great Debaters. He was moved by the story and was ready to "paint [his] own pictures," as a director, instead of being "a color of paint" on a blank canvas as an actor. Washington didn't originally intend on acting in the film, but because of budgetary constraints, he took on the ambitious role of Tolson. It is the story of three black students in 1935 who stand up against the racial barriers in academia and society to debate and beat a white university for the first time ever. Tolson is their coach, mentor and inspiration.

Washington says he had his own version of a Melvin B. Tolson in his life. His acting mentor, Billy Thomas, helped keep Washington encouraged as an early actor at the age of 22. "He believed in me ... he had bigger dreams or ideas about what was going to happen in my life than I did," Washington said. "For someone to believe in you and express that to you at an impressionable age gives you drive."

A Story of Hope, Not Racism

According to Washington, this is not a film about "racism in Texas in 1935. It's what these young people did about it ... to overcome whatever obstacles were in their way." While the film is filled with racial tensions — from segregated schools, racial slurs and even a scene of a lynching — the underlining message is the way in which the debate students and their coach unite and overcome. "Certain things are a given," Washington said. "Are you going to lay down, or are you going to keep fighting?"