Accessibility links
Kansas Town's Green Dreams Could Save Its Future After a tornado nearly destroyed Greensburg, Kan., in May, city leaders came up with a revival plan: make it the greenest town in America. Among the projects are new homes and buildings that are more efficient than the ones they replaced.

Listen
Kansas Town's Green Dreams Could Save Its Future 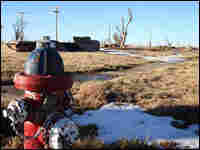 A battered fire hydrant and shredded tree trunks are among the only things left in Greensburg from before the tornado hit in May. Frank Morris, NPR hide caption 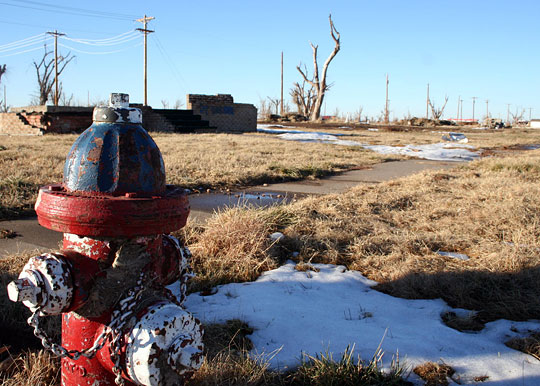 A battered fire hydrant and shredded tree trunks are among the only things left in Greensburg from before the tornado hit in May. 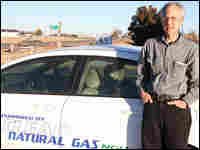 Danny Wallach shows off a natural-gas-powered car donated to Greensburg. Wallach is the head of the nonprofit group Greensburg Greentown, which is leading the push for environmental sustainability in the small Kansas town. Frank Morris, NPR hide caption 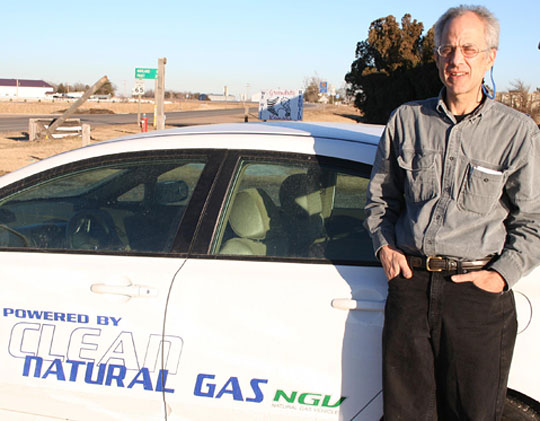 Danny Wallach shows off a natural-gas-powered car donated to Greensburg. Wallach is the head of the nonprofit group Greensburg Greentown, which is leading the push for environmental sustainability in the small Kansas town. 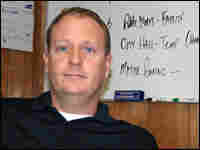 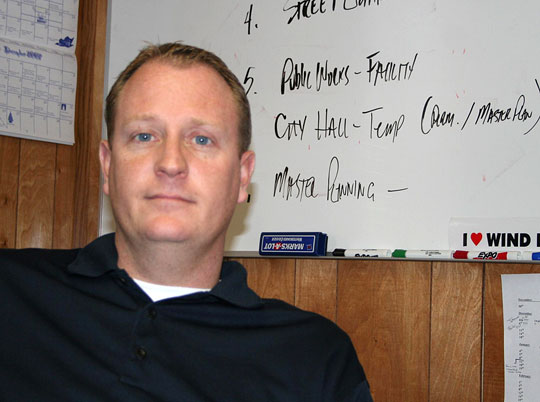 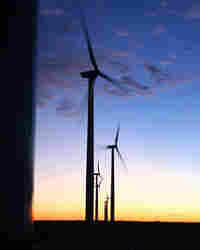 Kansas ranks third in the nation in wind-power potential. The wind keeps blowing, even at dawn at a new 100 megawatt wind farm in Spearville, about 43 miles from Greensburg. Frank Morris, NPR hide caption 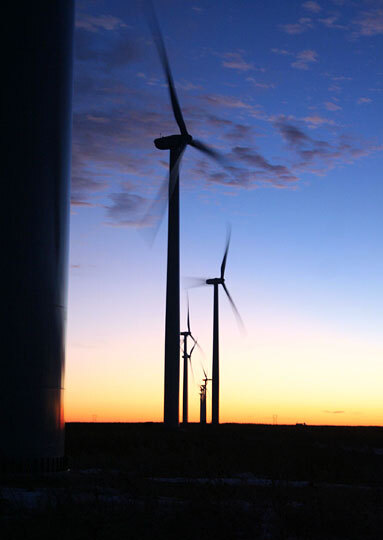 Kansas ranks third in the nation in wind-power potential. The wind keeps blowing, even at dawn at a new 100 megawatt wind farm in Spearville, about 43 miles from Greensburg.

Greensburg, a tiny town on the vast, flat prairie of western Kansas, is at the center of a grand experiment. In May, a tornado obliterated nearly every house, tree and business.

The twister -- among the strongest on record -- killed 10 people and displaced almost 1,400 residents. The community had been in steep decline before the storm, but city leaders quickly saw opportunity in the disaster. Perhaps they could revive Greensburg and sustain it for generations to come by making it the greenest town in America.

Less than two days after the tornado, as huge machines began to tear into the wreckage of his hometown, School Superintendent Darin Headrick managed to put a brave face on.

"Towns are about people, they're not about buildings. And it's a huge opportunity to rebuild -- not just rebuild it the way it was but maybe rebuild it a little bit better than it was," Headrick said.

Though buildings, books and records were gone, Headrick pledged to open school on time in the fall.

First-graders recently celebrated the end of an odd semester. Classes were held in small, white trailers lined up a quarter-mile from where most of the students now live. Their teacher, Laura Proser, says winter break marks a welcome milestone.

"We just got our stoplight yesterday, and everybody's excited about that," Proser said.

The Greening of Greensburg

Townhomes are beginning to rise from the ragged tree trunks, weeds and ruins off Main Street. They mark a radical departure from traditional low-income housing, according to Duncan Prahl, who is from Pennsylvania and on contract with the National Renewable Energy Labs.

The townhomes are "LEED gold certified," Prahl said. LEED stands for Leadership in Energy and Environmental Design. The rating is based on a system which rewards energy savings. Prahl said gold certification means these places will be almost twice as efficient as they used to be.

Building to this standard for working-class families is unusual, Prahl said.

"A lot of what's happening in Greensburg is some of the first in the country," Prahl said.

"I mean, it literally struck me, green -- Greensburg -- and at the time, I wasn't aware of just how perfect the timing in the national green movement was," Wallach said. Wallach heads Greensburg Greentown, a nonprofit group leading the push for environmental sustainability in Greensburg.

Leaders in the environmental movement have embraced the plan. The Discovery Channel is filming a show here, called Greensburg Eco-town, and green architects are working overtime.

"They really get it, and they say 'OK, it's not this crazy tree-hugger agenda.' It's common sense, and it's what these people are really about," Wallach said.

'Death by a Thousand Cuts'

About 43 miles from Greensburg is a new wind farm in Spearville, Kan.

Lynn Billman of the Department of Energy believes that the force of nature that obliterated Greensburg could play a major role in sustaining its attempt to recover.

One of the turbines on the wind farm would be plenty to power Greensburg most days. Billman says the area also has great solar and geothermal potential. Even manure from nearby feedlots could be tapped for energy.

As the city weighs options for generating its own energy, it's also getting serious about saving it. Greensburg City Council resolved that all new city buildings should meet the very highest environmental standard — LEED platinum.

City manager Steve Hewitt says the town will come back stronger than ever. Before the tornado, Greensburg was shedding 2 percent of its population every year. Those who left for college rarely returned to stay. It was death by a thousand cuts.

Now, Hewitt is thinking big: office space for new businesses, the high school and an art center are all being designed LEED platinum, a move he hopes will boost Greensburg's appeal.

"Maybe it's a little crazy. There's only 14 platinum buildings in the country. When it's all said and done, I'd like four or five here in Greensburg," Hewitt said.

An energy company has announced plans to build a biodiesel plant in Greensburg. Google is considering building a wind-powered data center here. Several other companies are watching closely. Meanwhile, 100 new homes are going up, all of them more efficient than those they replaced.

About 200 Greensburg residents -- one-third of the town's current population -- recently congregated in the new school gym to talk over the progress.

Robert Kilgore said he and his wife are rebuilding their home with extra insulation, better windows and hot water on demand.

"To be successful, we just have to do it," Kilgore said.

But there's a lot of uncertainty. FEMA will cover 75 percent of the cost of restoring city buildings to their pre-storm level. Other federal and state grants will help cover most of the rest of that cost.

But city leaders aren't talking about restoring things to their old level.

"My wife says, 'Oh don't be negative,' but doggone it, I look at it from the financial part of it. I'm all for everything for Greensburg, but everything's got its price. There's no freebies," Stauth said.

Despite its murky future, Greensburg has already done something few small towns can: inspire its youth.

"Before the tornado, I was not going to come back. I was going to go to college, and who knows where. This community was dying. Now I'm definitely coming back, and I know a good majority of my friends are," said 15-year-old Levi Schmidt.

For all the optimism here though, nobody thinks that reviving Greensburg is going to be easy.

"A lot of little towns are dying a slow death, Headrick said. We had a fork put in us pretty hard. We have to find a way to resurrect, and we hope we're making good decisions to do that."

As Greensburg tries to leverage environmentalism to rebuild and sustain itself in the wake of near total destruction, it just may unwittingly be writing a modern survival guide for rural America.

Kansas Town at a Post-Tornado Crossroads July 18, 2007
Rings Resurface in Wreckage of Kansas Tornado May 14, 2007
Will Greensburg Bloom Again as a 'Green' Town? May 12, 2007
Will Greensburg Tornado Leave a Ghost Town? May 12, 2007
Rebuilding After a Kansas Tornado May 8, 2007
Tornado Victims in Kansas Still Reel from Storm May 8, 2007
Kansas Tornado Survivors to View Remains of Town May 7, 2007
Tornado Leaves Deaths, Devastation in Its Wake May 6, 2007
Deadly Tornado Destroys Kansas Town May 5, 2007