Accessibility links
American Indian School a Far Cry from the Past Much has changed since the days when off-reservation schools were used to expel Indian culture. Students at Sherman Indian High School in California say they appreciate that instructors teach about other tribes. But budget cuts may put the schools in peril.

Listen
American Indian School a Far Cry from the Past

Read Part 1 of this Story 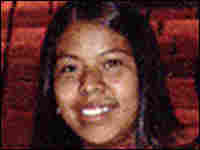 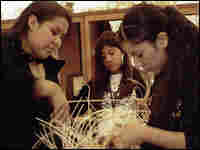 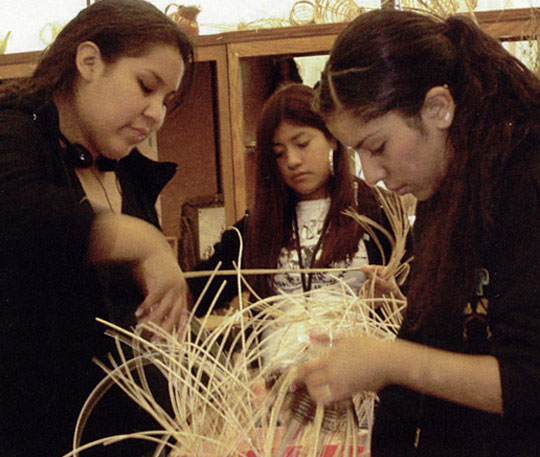 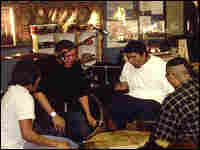 In addition to formal classes that teach American Indian customs and skills, there are also after-school activities for students, such as drum circles. Courtesy of Sherman Indian High School hide caption 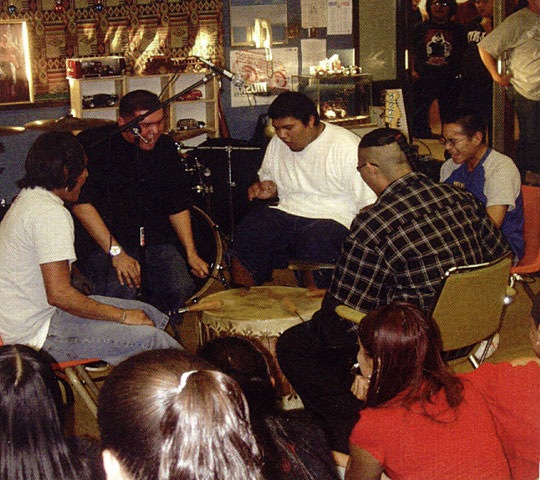 In addition to formal classes that teach American Indian customs and skills, there are also after-school activities for students, such as drum circles.

These days, most American Indian children go to public schools. But remnants still exist of the boarding-school system the federal government set up for Indian children in the late 1800s.

Some people, such as U.S. officials at the Bureau of Indian Affairs, question whether the government should continue to be in the boarding-school business. Many students at these schools say they are a necessary escape from the poverty and addiction that plague many reservations.

At Sherman Indian High School in Riverside, Calif., dorm supervisors wake up students before the sun rises. Students have to clean their aging dorm buildings before class, and supervisor Teresa Iyotte says if they don't get up in time to clean the bathrooms, they'll suffer the consequences.

A lot is expected of students at Sherman, one of seven federally funded off-reservation boarding schools for elementary or secondary education. Some of the most at-risk American Indian youth leave home to attend the schools, coming from more than 85 tribes from big cities and reservations across the country.

Sheila Patterson came to Sherman from the San Carlos Apache Reservation in southeast Arizona. She says she is proud of her traditional ways, and she shows off the moccasins she wears with her ceremonial dress. Patterson misses the reservation but says she needed to leave. Back there, she says, a lot of people drink and also commit suicide.

"That's why I had to get away and come here," she says.

Most students come to Sherman because they see it as a way to do better. Some students, however, are ordered to attend by judges who see it as an alternative to jail.

The national graduation rate for American Indians is about 50 percent. Charlotte Longenecker, a counselor at Sherman, says the low rate is not surprising.

"When you work with a population that has the highest suicide rate, the highest alcoholism and drug usage rate — I've never met so many people in my life who had lost family members, and so many in such rapid succession — that's going to happen," Longenecker says.

Administrators at Sherman say they maintain a tightly controlled environment. There is zero tolerance for drugs and alcohol. Students can leave campus only if they have earned a group activity, such as a trip to Wal-Mart.

Steve Yankton, a student from the Pine Ridge Reservation in southwest South Dakota, says life at the boarding school can be tough.

"We're always confined in a fence," Yankton said. "We really can't live high-school life like regular teenagers would. We can't just go shop at the mall whenever we want for how long we want. We can't go eat at a restaurant with our friends whenever we feel like we want. Staff always has to be around us."

Every day at Sherman is rigorously structured. But students who stick it out say Sherman offers them opportunities, too, like the chance to learn about other tribes.

In Tara Charley-Baugus' classroom, students learn the language of the Dine — also known as Navajo — by taking tests and reciting vocabulary. They also sing traditional songs.

Baugus tells her students that the songs are a way to teach more than just language skills.

"You learn something about your culture and history because of the sheep, from way back in the 1500s, when the Spaniards brought them in," she instructs students. "And you can teach these to your brothers and sisters. That's how you pass on the language."

Until the 1960s, the government schools tried to expel Indian culture among students. They were severely punished if they practiced Indian ways.

That isn't the case anymore. Teachers such as Baugus and Lorene Sisquoc are working to revive American Indian customs. At Sherman, Sisquoc teaches such traditional skills as basket weaving. But she says she is conflicted about why she is teaching these skills at a boarding school.

The reason, she says, is the boarding schools themselves, because generations of students who didn't learn the old ways didn't pass them along to children of their own.

"Kids were taken from their homes, and those traditional things weren't always taught," Sisquoc said.

These days, off-reservation boarding schools have more applications than they can handle, according to Don Sims, Sherman's recently retired principal. But a recent federal budget change is cutting each school's funding by hundreds of thousands of dollars. Sims says this could put Sherman in dire straits.

"We won't have enough money to start the school, to have enough staff to have the services needed for the kids," Sims said. "It's an impossible situation."

Officials at the Bureau of Indian Affairs say they know these schools are in trouble. But they disagree over whether the federal government should even be running Indian schools in the 21st century.

"You can talk to 20 people in our organization, and 10 people will say we shouldn't have off-reservation boarding schools, and 10 other people will say there's a need for these kinds of schools because of the at-risk students," said Angelita Felix of the BIA education office.

In the past few decades, tribes have begun taking over boarding schools. They now control about half of them. Most are on the country's largest reservation, the Navajo Nation. The Navajos discourage students from attending boarding schools off the reservation.

Eddie Biakeddy, deputy director of the tribe's Department of Education, says educating kids on the reservation has become almost a matter of survival.

"A lot of other Indian tribes in the United States have lost use of their language and therefore their culture," Biakeddy said. "And there is a goal of the Navajo Nation to establish its own educational system, where the Navajo Nation would have control over all the schools and there should be no need for any on-reservation students to go to an off-reservation boarding school."

But many smaller tribes don't have the money or political organization to run their own schools, let alone facilities for at-risk youth.

At Sherman, many students and recent alumni say the off-reservation boarding school system has helped them.

"Sherman pretty much did save me, I guess, in a way," said Seana Edwards, a Prairie Band Potawatomi. She nearly failed freshman year at her public high school in New Hampshire and says she would have ended up working a dead-end job. But she transferred to Sherman, graduated and now attends the University of California, Berkeley.

She goes back to Sherman often to convince students that they, too, can go to college. And she says she appreciates how far the school has come since the time when students wore uniforms and marched in lines.

Edwards' own younger brother and sister are in elementary school in New Hampshire. But if they do need Sherman's tight structure, morning wake-ups and nightly check-ins someday, she wonders if Sherman Indian High School will still be there for them.