Accessibility links
Timeline: The Turbulent Life of Benazir Bhutto Bhutto's career in politics included serving twice as Pakistan's prime minister and spending eight years in exile. She was assassinated at a political rally just two months after returning to her home country. 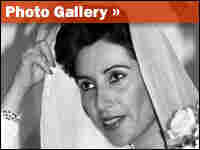 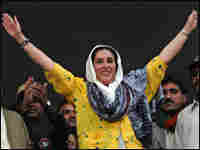 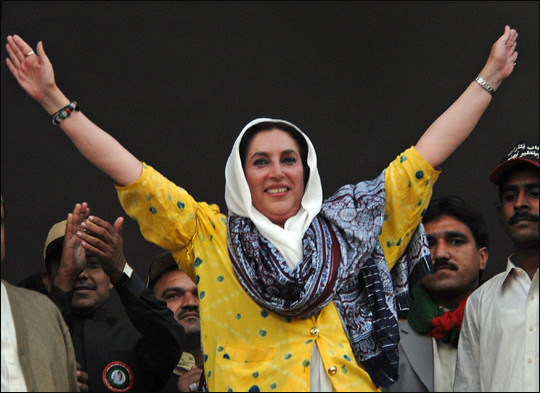 Bhutto waves to the crowd during an election campaign meeting in December.

Benazir Bhutto, who became the first woman to serve as prime minister of a Muslim country, was assassinated Thursday when an attacker opened fire and then blew himself up after a political rally in Pakistan. Here, a look at key moments in her often stormy life in politics:

June 21, 1953: Benazir Bhutto is born into a wealthy family in southern Pakistan.

April 4, 1979: Zulfikar Ali Bhutto is executed for the murder of a political opponent, two years after his ouster as prime minister in a military coup.

April 10, 1986: Benazir Bhutto returns from exile in London to lead the Pakistan Peoples Party, founded by her father.

1996: Bhutto's brother Murtaza dies in a gun battle with police in Karachi. Her brother Shahnawaz had died under mysterious circumstances in France a decade earlier.

April 14, 1999: A court finds Bhutto guilty of corruption while she is out of the country. The conviction is later quashed, but Bhutto remains in exile.

Oct. 5, 2007: Musharraf signs an amnesty covering cases against Bhutto, opening the way for her return and a possible power-sharing agreement.

Oct. 18, 2007: Bhutto returns to Pakistan after more than eight years of exile. She narrowly escapes a suicide bombing that kills nearly 140 people during a homecoming procession in Karachi.

Nov. 9, 2007: Police throw barbed wire around Bhutto's house to keep her from speaking at a rally to protest Musharraf's imposition of emergency rule.

Dec. 27, 2007: Minutes after Bhutto addresses thousands of supporters in Rawalpindi, she and at least 20 others are killed when a gunman opens fire and a suicide bomb explodes.

Compiled from The Associated Press and NPR research